Maintaining a rhythm of devout prayer and reflection at Lough Derg 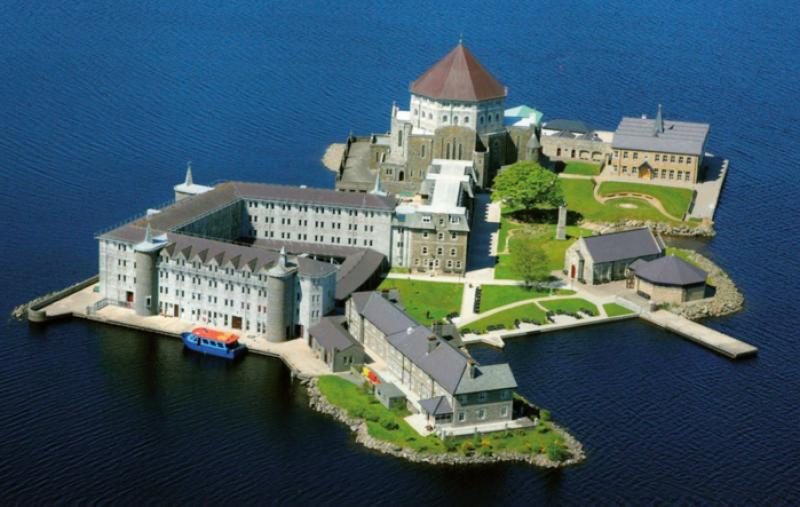 The prior of Lough Derg, Father La Flynn who is spending this pilgrim season on the island feels ‘at ease’ with being alone as he  continues to maintain a tradition of prayer in St Patrick’s Purgatory.

Father La rises in the morning at around 5.40am for early morning Mass.

Less than an hour later, he is  under an open sky as birds fly overhead undertaking the Stations in his bare feet leaving solitary footprints where before many soles left their imprint on the earth.

A station takes around an hour and ten minutes to do and  Father La does so under the swooping wings of the Housemartins amidst a backdrop of blooming nature during these calm but drizzly mornings.

At 8am, the boatmen come  onto the island. Each day Thomas Gallagher from Ballyshannon, Reece McGrath from Pettigo and Joe Sheeran from Mountcharles arrive on the island and  undertake their own work. They leave at 4pm.

“Really, I can hardly remember the last time in my life I was lonely. I am at ease with my own company,” he said.

As they leave the island, Father La is well into his day.

“I would be hard pushed to find a time when I have been busier.

“People are afraid that I am bored but I’m not. The team are exceptionally busy, they have been  putting so much work into alternative ways to keep in touch with pilgrims. We have set ourselves to be in outreach mode,” he said.

In the  evening, Father La goes up to the Basilica for night prayer.

“My thoughts are to honour the rhythm of the pilgrimage season,” he says.

This year, those affiliated with the island are busy in new and alternate  ways.

Father La said that many people have been sending petitions to  those on the  island: “We get a lot of people who send us petitions asking for prayer for this or that,” Father La said.

In his prayers, he remains faithful to those people and the  heartfelt petitions that they have undertaken to write and to send to the island.

On the last weekend in June, Father La  invited people to do the full pilgrimage with him from wherever they were.

It was not a virtual pilgrimage, he said, but a virtuous one and people did  fast and pray as if they were on the island.

People signed up online to participate.

Father La recalls that the pilgrimage was one where they were not blessed with favourable weather.

“The rain was horizontal. It was driving rain and constant wind.

“It was relentless during the night. On Saturday we got through reasonably well,” he said.

Those who participated were bestowed with a certificate which carries the Lough Derg seal and are signed by the prior.

All of the certificates had to be sent out by the team to those who participated.

A pilgrimage season did not take place on the island  in 1828 as result of  a dispute with boatmen.

However, many more pilgrims came to the island the following year.

There is now a newly refurbished path on the lake shore of  Lough Derg.

The path  which was recently  relaunched would have been used by pilgrims in the medieval times.

In the 1400s pilgrims from as far away as Spain, Italy and Hungary used part of this trail as they made their way to what medieval Europe knew of as St Patrick’s Purgatory.

Work was being carried out on the path before the pandemic struck and six new boards were designed and ready to go when the lockdown came into effect.

There are now six display boards which bring to life the story of the Pilgrim Path and those who walk the path can enjoy stopping to read the boards.

Father La said that the ‘full walk’ is around 12k along the shore road and to Saints Island.

“We went to the point where pilgrims used to cross to Saint’s Monastery where they were given hospitality before being brought to Station Island,” he said.

People can also take a shorter loop and everyone can do the walk at their own pace.

Many people enjoy taking photographs in the historic and picturesque surroundings.

“I led two guided groups on Saturday and Sunday,” he said.

Numbers were limited as a result of the Covid-19 church and State guidelines,  those who took part enjoyed it.

Father La said that it remains to be seen whether a one-day retreat will take place on the island this year.

“It remains to be seen whether we can open for a one-day retreat at this time,” he said.

However, a meeting for the matter to be discussed will take place before the end of the week.

It is expected that Father La will remain on the island until August 15.

He  has now become familiar with a goose who comes onto the island to  graze in the grass.

The goose can be found behind St Mary’s, at times,  and when startled will take off honking  at great  speeds, at times.

His presence is one that the reflective priest appreciates.

“I am kind of glad for his company.

“It is amazing the company that God sends you when you are on your own,” he fondly says.