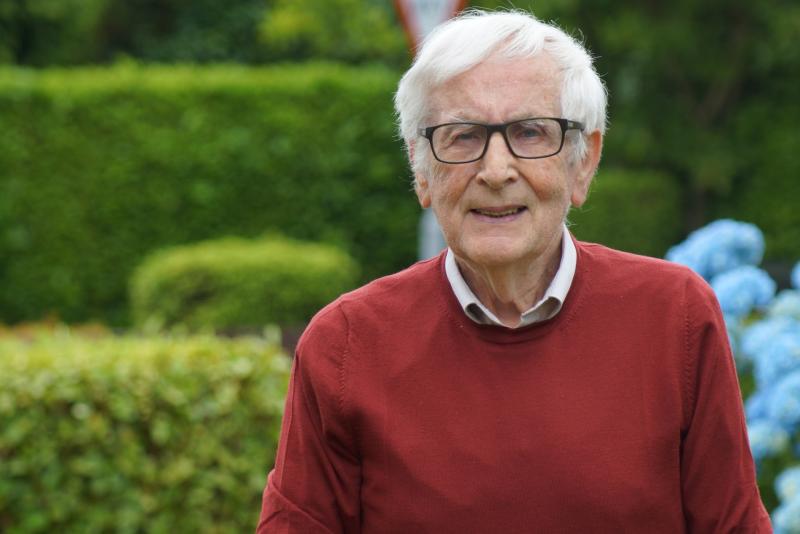 Paddy McCaul will be sharing his memoirs with Derry News readers.

Paddy McCaul had often thought about writing the story of his life.

Now, at the age of 88, the well-known Derry man has finally done it.

Over the last couple of years, Paddy has been writing his memoirs and, from next week, the Derry News will be publishing extracts of his 25,000-word story.

It is a fascinating story which takes in many aspects of his life, from growing up during World War 2 to running a business in Derry's city centre throughout the Troubles for 35 years.

However, his working life is only part of Paddy's story.

After retiring, he embraced a love of learning and graduated with a degree in Irish History and Politics from the University of Ulster at the age of 74.

He admits that he was like a 'grandfather figure' to his young fellow students.

He continues to enjoy reading and learning about a host of subjects, particularly history.

He is a man who likes to keep busy.

“I did not want to retire and spend all day sitting in a chair zapping at the TV,” he said.

As a result, the last couple of years have been spent working on his memoirs.

Paddy was born in 1932 at 81 Lone Moor Road, the fourth of eight children born to James and Mary McCaul.

Paddy admitted that it had been emotional in writing about his parents.

“It was only when I was older that I appreciated how good and hardworking people they were,” he said.

“My father would have worked all he could to provide for his family and my mother did everything to make sure that her children were fed and looked after.

“I have such admiration for my parents but they were people of their time and that's how things were then.”

After leaving school, Paddy worked as a clerk in the Great Northern Railway and the City Surveyor's Department in Derry.

He started employement as a salesman with electrical appliance company Electrolux in 1961.

Through relationships built up in this job, he opened his own shop, McCaul Appliances at John Street in 1966.

Within a few years, John Street and the rest of the city centre was targeted regularly as part of the IRA bombing campaign.

Paddy's shop did not escape.

In his memoirs, he recalls on one occasion being held at gunpoint as a bomb was planted in the store.

He recalls: “My main focus was not on what was obviously some sort of device but on the shaking hand which held the rather ancient-looking hand gun.”

McCaul's Appliances relocated for a time to the Waterside, before finding a new base at Quayside Shopping Centre where the store remained until Paddy retired in 2001.

However, as already stated, Paddy was not keen on taking things easy during retirement.

“I always like to keep active and did not want to end up doing nothing when I retired,” he said.

He signed up for a Diploma in Foundation Studies for mature students at the University of Ulster's Magee campus in 2002.

He is in no doubt about the impact this had.

“I had always been interested in reading since I was a young boy and had enjoyed my time at school.

“However, coming from a working class family, the focus was always on getting out of school and finding work so you could start contributing to the family.

“So it was great to get the chance to indulge my interest in learning at that later stage of my life.”

Paddy said he gained a new lease of life mixing with his young student colleagues and is a big advocate of the importance of education.

Despite being in his '89th year', the Derry man keeps himself active with daily walks along the city's quayside.

In his long and eventful life, he has seen many changes, some good, some not so good, in his home town.

Whilst acknowledging that he would have been well known in Derry, especially through his involvement in business for many years, Paddy describes himself as 'just an ordinary Derry man'.

He says he hopes people enjoy reading the story of his life.

He insists it is just the story of an ordinary man.

Often, those are the best type of stories.