The history of Derry Credit Union: The story behind the creation of a 'bank with a heart'

In this, the third article in a Derry News series on the founding, growth and impact of Derry Credit Union as it celebrates its 60th anniversary, we reflect on the 1980s

Members of Derry Credit Union sign the contracts for its new Abbey Street base in the 1980s.

By the dawn of 1980, Derry Credit Union was firmly established and looking forward to celebrating its 21st anniversary.

Instead, the 80’s were a time of steady growth and development.

Every decade has its unique highs and lows.

Many of us will remember some of the significant events of the 80’s, such as the fall of the Berlin Wall, the launch of MTV, and our first experience of clunky mobile phones and PCs.

Low points included the Challenger space shuttle disaster, the stock market crash, the Aids HIV explosion, and, closer to home, ongoing political strife and the 1981 hunger strikes. These were unique to the 1980’s.

In a broader sense, however, the experiences of our city in the 80’s and the important role played by Derry Credit Union, bear a striking resemblance to what we are experiencing today during the COVID-19 pandemic.

As the old adage goes: the more things change, the more they stay the same. Like today, times were not easy in the 1980’s.

Families, particularly those who were benefit-dependent, suffered from government cutbacks.

Unemployment was rife. The cost of living skyrocketed.

Throughout it all, Derry Credit Union provided a safety net for its members by providing fair deal loans and a safe place to save.

For those experiencing financial hardship and struggling to make their loan repayments, the credit union offered a sympathetic ear and practical assistance without judgement. We provide these, and more, services to members today.

As it was in 1980, Derry Credit Union is here to help those who are suffering financial hardship to meet their needs.

Indeed, the words of Derry Credit Union’s President Sean Mullan in his 1980 President’s Address, are just as reassuring today in the context of the economic impacts of the ongoing the coronavirus crisis and Brexit.

“The recent news regarding unemployment in our city is not good. Many of our members will be affected, this is all the more reason as Credit Union people that we should endeavour to help them adjust to the circumstances they find themselves in and that we should be in a position to advise them how best to use Credit Union to meet their needs.”

Against this backdrop of economic downturn, there were, of course high points.

Two Board of Directors’ priorities during this decade were to improve the computer system and secure a site that would accommodate a larger, fit for purpose office, capable of serving its growing membership and staff.

In their 1984 annual report, the Board announced their intention to implement ‘a new Computer Terminal System,’ that would make the service to members more efficient.

In 1987, this new computer system was finally installed and operational. 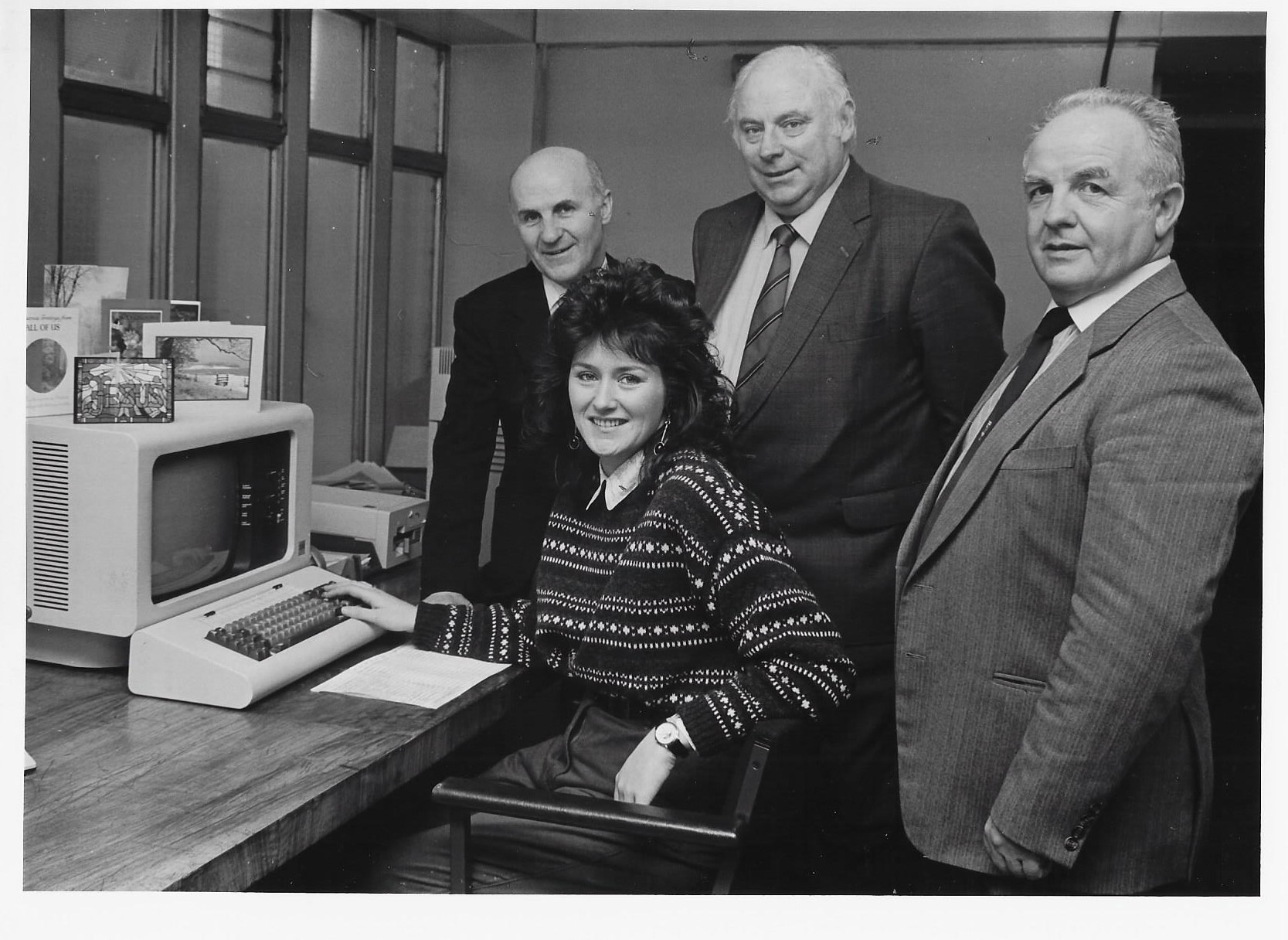 The Directors explained that: “Tellers’ positions were adapted to meet the requirements of a Visual Display Unit at each position. This enables the teller to key directly into the ‘Main-Frame’ and record exact details of a member’s account, a service we are sure you will appreciate.”

Despite the 1977 refurbishment of Derry Credit Union’s first purpose-built office to create more space, it quickly became apparent that the building and site were still inadequate.

The search for a remedy took several years.

The sub-committee tasked with overseeing this work eventually recommended that the site adjacent to the existing offices on Abbey Street was the best option, and this site was purchased in 1986.

True to the credit union’s self-help ethos, a savings drive was initiated the next year to raise the funds needed to construct a new, larger, state of the art office that would incorporate both the old and new sites into one premises.

The goal was to increase members’ savings by £2m over two years, with an overall savings target amount of £9m.

As President Agnes McCourt explained: “The most economical way to fund this project is to look for a commitment from all our members to make the effort to save a little extra each week. The surplus then created over and above our members’ borrowing requirements would be sufficient to meet this large capital expenditure. A sub-committee has been set up to initiate a big savings campaign by saving something extra each week no matter how little. If you the members respond to this savings campaign, then we can build your new building without having to borrow from outside sources, at high interest cost.”

Directors Seamus McAnee and Con McAlister composed two jingles called ‘Save a Little Extra Now’ and ‘Gather Up the Pounds and Pennies Too,’ to encourage members to save for the new building.

Studio recordings were made and played on a loop in the office.

Seamus McAnee recalled: “The staff had to listen to these recordings every day and it was driving them demented. At one stage, a member offered to put an extra £5.00 in savings if that music was turned off. Una Sweeney, who is no longer with us, would tip off the manager if she saw one of the Savings Committee members approaching the office, and the Manager would play the record so the committee thought it was played all day!”

Credit unions have been at the forefront in promoting the women’s equality.

Women, including married women, were encouraged to open accounts of their own, giving them an important sense of economic freedom.

Four of the ten directors to hold the office of President since Agnes McCourt finished her term of office have been women.

And for the past 22 years, the managers of the three main credit unions in Derry have been women.

Over the years, Derry became a significant employer with a low staff turnover rate.

This can be attributed in large part to fair and effective management, positive working conditions and a strong sense of comradery.

Eamon recently recalled his memories of the credit union.

“My memories of Derry Credit Union in the 1980’s begin with being woken at one on a Saturday afternoon so I could run down and pay my father’s CU before it closed at 2. Standing in that queue, which was a metal rail rather than a rope, little did I know that in March, 1986, I would be starting my first day at work in Derry Credit Union.

“The friendly face that greeted me on my first day Nora Ferry’s, whose 25th anniversary occurs in June this year. Nora and the other girls, like Una Sweeney, Sadie McCay and Marie Harley, were like mothers to me, teaching me the ropes. Today I see more ‘mothers’ (and ‘fathers,’ of course) teaching the ropes to the new staff that are joining our credit union family every year.

“You know you are working in a good environment when colleagues that were working there when you joined like Siobhan Boyle (pictured below), and those who joined with you, such as Michael Gallagher, are still employed at Derry Credit Union.” 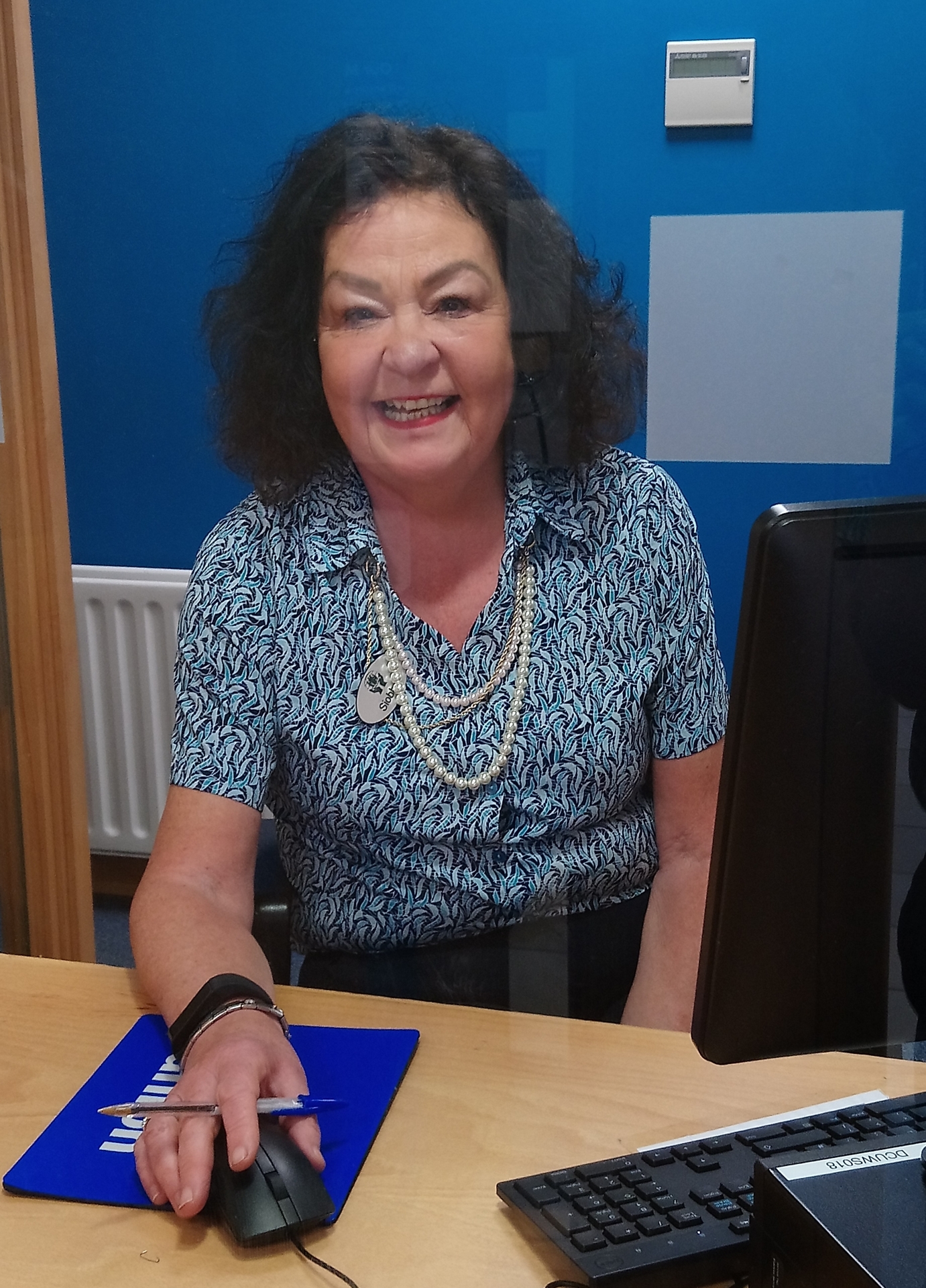 He concluded: “To me, working here and seeing the same members’ faces and their families coming and going strengthens my belief that we are all part of the Credit Union Worldwide Family.”
Siobhan Boyle, the longest serving member of staff still working at Derry Credit Union, agreed.

“Great friendships were made among the staff. We even went on holidays together!

“Ann Gallagher, Donna Harkin, Una Sweeney, Marie Harley, Sheila McAteer and me – we had many a bank holiday in Dublin or Galway. Dancing was another of our favourites. Our top three places to go were the Point Inn, Oscars and El Greco.”

“The girls working in Essex got off work at 1.30 on a Friday and the credit union was the first place they stopped to get their cheques cashed before heading into the town. They were queued outside, waiting for us to get back from lunch.

“Things were simpler back then. Ernie Thompson was our credit control officer. He called in with members who were behind in their payments. We used to say Ernie had had a cup of tea in every member’s house. And Sean Drummond was our manager. We dubbed him ‘the People’s Champion’ because he tried to help everyone. He was like a father figure to us; he knew all our boyfriends and went to all our weddings.

“Of course, our service is more professional today because there are so many more regulations. Back then, staff would visit the homes of members who were housebound to bring them their loan forms and money. I even remember hand-delivering AGM notices. I wouldn’t fancy doing that today with over 30,000 members!”

The Annual General Meeting is when the members exercise their democratic rights.

However, low attendance at the AGM was an ongoing issue that continues today.

To improve attendance back in the 1980’s, the Board introduced innovative ways to entice members to take part.

It was common for members attending the AGM to be entered into the infamous turkey draw and then be treated with a dance, disco cabaret and supper. 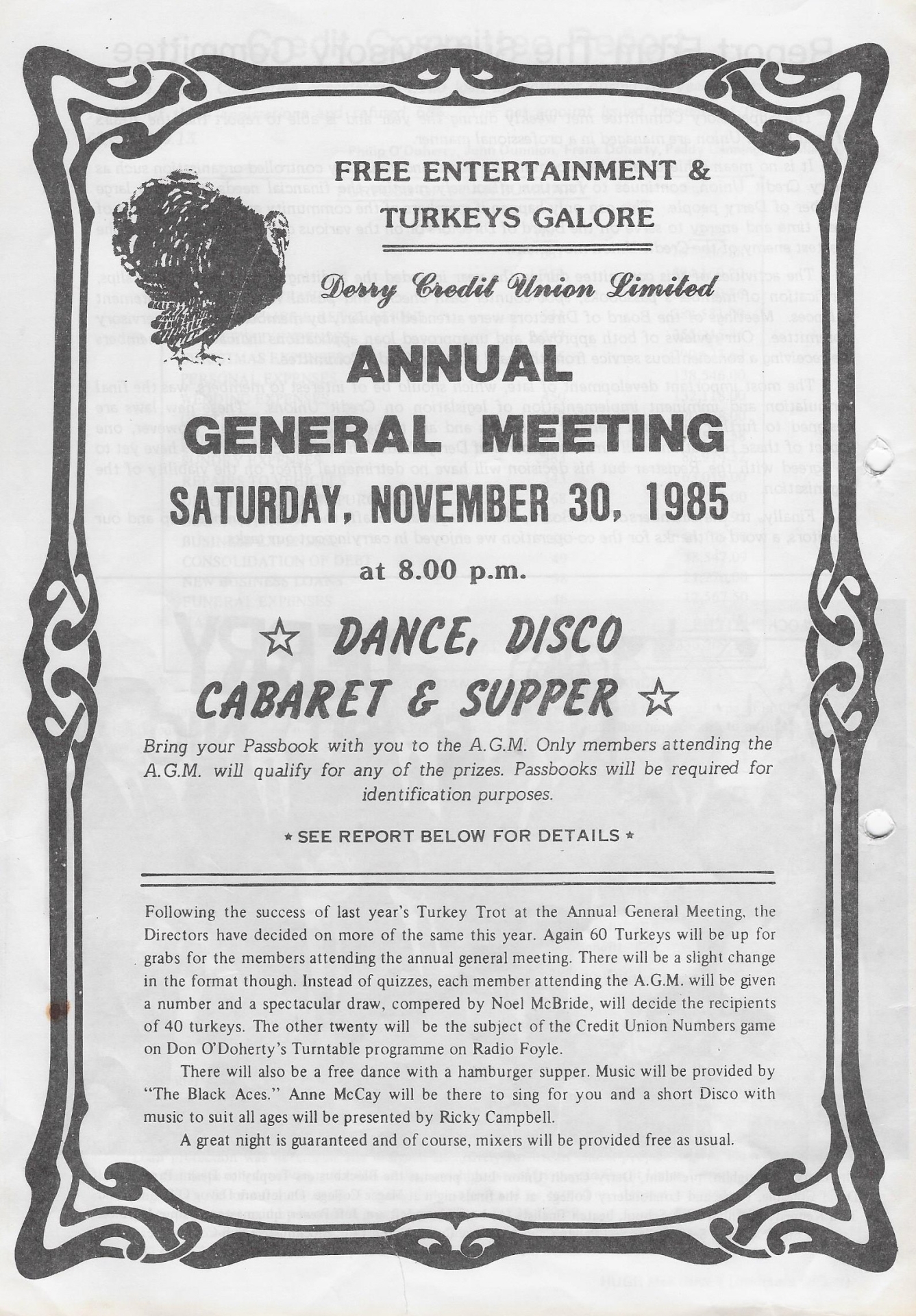 Throughout the decade, appeals were made to the membership to volunteer on credit union committees.

Then, as now, the Board was conscious of their duty to emphasise that credit unions are financial cooperatives that are owned, run and managed by their members.

A number of changes were implemented during the 1980’s.

Minor savings accounts were introduced. Parents could now open accounts for their children with a maximum savings limit of £250.

In 1988, the Irish League of Credit Unions established its Savings Protection Scheme to protect members’ savings.

This scheme exists today to provide stability to the credit union movement in uncertain times.

The savings campaign to raise money for the new building was a great success and the building work began.

The teething problems associated with the switch to computerisation were over.

Staff were processing loans, payments and lodgements with speed and efficiency, and the Board met twice monthly to meet their growing responsibilities.