Leann Monk-Özgül, a co-founder of Derry-based company Elemental, tells the story of how the business came about 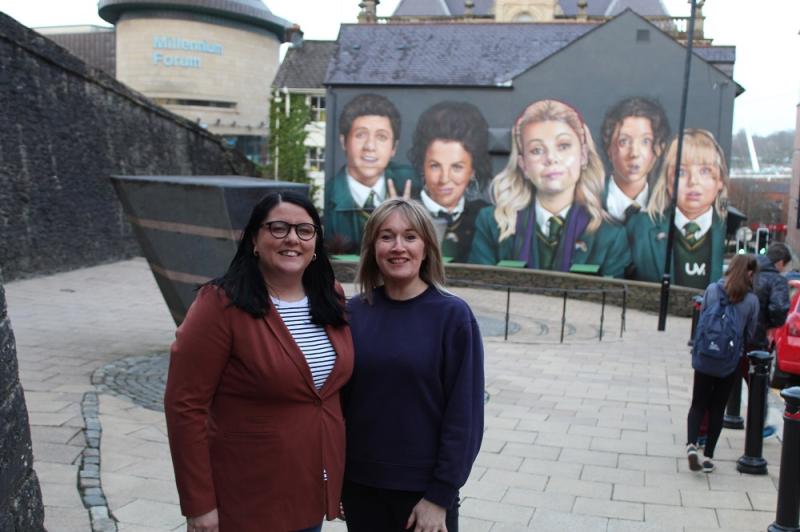 It was 2013 and there was a whole new lease of life and confidence in the city as we had been awarded the first ever UK City of Culture.
I was a community worker at the time working for the Old Library Trust, Healthy Living Centre in Creggan.
As part of the high level plans for the City of Culture year (taken from the One Plan) there were three high levels objectives of what we wanted to be;
1. To be an Active City
2. To be an Age Friendly City
3. To be an Early Intervention City
Sub groups were created for each of these high level objectives.
Back then I believed, and still do believe, that we should make it as easy as possible for people to take part in all types of activities regardless of their ability or age. Basically something for everyone.
At one of the meetings around Easter time, I noticed a girl in the sub group meeting who was so bubbly, friendly, chatty and was dishing out wee chocolate Easter bunnies to everyone.
I was like “Oh she's interesting, I must keep an eye on her”. Turns out this lady was Jennifer Neff (the other co-founder of Elemental)
Anyway long story short, we got on like a house on fire in the meeting and had so many common interests, concerns and passions around doing everything we can to halt health inequalities and supporting those that need the help most in our communities.
The tipping point came when she professed her love for diagrams to tell a story to get a message across rather than using a whole load of wordy paragraphs, when the diagram could tell the story much better with the bonus in that it was easier for people to digest and understand.
I always say it was a match made in heaven through our love of diagrams.
Jennifer and I got chatting and we were both really frustrated that despite there being loads of brilliant community programmes happening on peoples doorsteps, a lot of the time they were not remotely aware.
We knew that people needed more support to attend and engage in these activities - it’s not enough to hand someone a phone number and expect them to go along.
And from the health commissioners’ side of the things, we could see money being spent on different initiatives in different areas, but with no analytics about outcomes, engagement, gaps in service provision or health risk hotspots.
They needed a better understanding of what was available and what was to inform their commissioning and recommissioning decisions.
We both decided that we wanted to do something together to better connect up our communities and thought technology could play a massive part, acting as the middlewomen/man to do this and place the person at the centre - to give them the best chance at life.
We didn't realise at the time what we were talking about was social prescribing and we laugh now when we talk about as we thought we invented social prescribing.
When we did our research we quickly found out that social prescribing had been around for years and when you scratch the surface of social prescribing it's basically the community development approach to health improvement that we have all been doing for over 40 years.
However we also quickly recognised that the missing piece of the puzzle was digital, to help enhance social prescribing and allow it to be scaled across communities, towns and cities.
So as I said, it was 2013 and there were lots of new things happening across the city and there was a big push for all things digital, innovative and ‘just going for it’ and giving these innovations a try.
A competition was announced called the TMED health challenge which was inviting people from across Derry to pitch their ideas in a Dragons Den five-minute style format. We had practiced our pitch for two minutes and planned to show a video for three minutes.
Showtime for the video came, and the speakers didn’t work.
Let’s just say we didn't have a good experience in the pitch and we didn't win the £500 prize.
However as luck would have it, the winner (Professor Maurice Mulvenna from Ulster University) asked to meet us for coffee the following week.
When we met up he said: “I love what you're trying to do, and so much so, I am going to donate my prize money to you.”
So we got his £500 prize money and three months of incubation space at C-TRIC.
We were off the starting blocks, and Elemental was born.
So you could say the start of Elemental was really down to the generosity of Maurice and the fact that he got social prescribing.
From a business point of view Elemental is going from strength to strength, we are the market leaders for digital social prescribing across the UK and Ireland and our customers numbers are growing month on month, working with over 200 social prescribing projects and with 2,600 GPs using Elemental to refer their patients to community based activities.
The great thing is that our base is firmly and always will be in Derry with the majority of our 28 employees based in the city.
As it happens we are currently recruiting a Senior Developer.
If interested get in touch www.elementalsoftware.co