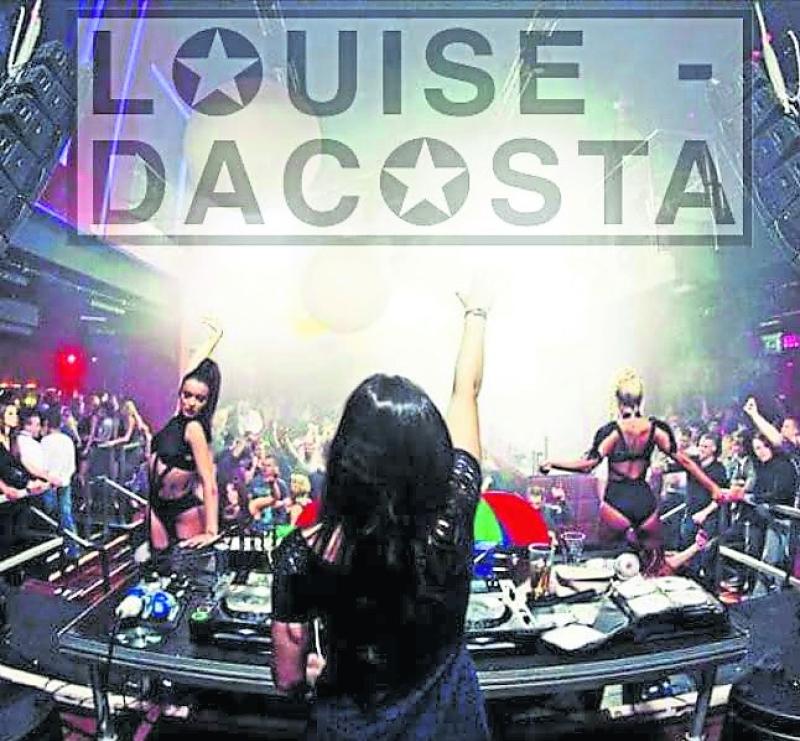 Louise DaCosta on the decks

Pride is run by volunteers and depends on good people like yourselves to keep the festival running.
This year there’s an incredible line-up for you to celebrate International Women's Day, on the bill there’s  the Henry Girls,  Blackbird and Crow,  Reevah,  Blood,  Great White Lies  and  Tara Gi  with comperes for the evening,  Madonna Kebab  and  Thran Leeann,  and ending the night with some tunes from  The Stray Kitten.  All that for £5 in Sandino’s on Saturday, March 7, but before that, there are several events, some flying the flag for the women and others are just dirty garage punks who should know better.
The former includes Louise DaCosta, the one-woman army making everyone take notice of her skills producing electro music.
It’s been a whole year since I spoke to her about setting up her own label and got another chat to her this week…

Women's Day coming up, how are things in electronicland for women behind the decks?

“Things are definitely evolving in the music scene.
“There are certainly more women getting involved.
“Even from our workshops there's much more interest in ladies from all ages, long overdue, but its brilliant to see and be part of the #equalisingmusic campaign.”

“Of course, too many to mention. However, there are a few emerging acts that have come through the ranks at our courses.
“I’m excited to watch their progress and looking forward to seeing them smash it at our label party.
“Don’t want to make any names just yet...but keep an eye on our posters and events for some super next generation talent.”

You're the brains behind a record label, no easy job, how has that been?

“Honestly it's been great. Delighted to be working with so many talented artists from all over Ireland and across the world.
“We’ve signed over 40 artists, with our focus on pushing homegrown talent, but we’ve also welcomed established and emerging artists from USA, Spain, Portugal, Italy, UK, Malaysia, Serbia and India.
“Initially, I had a three-year plan, but we accomplished all that and more within the first year... which was a pleasant surprise to say the least!
“Selling out our label party events across the country, consistent radio play, hitting multiple charts with our tracks and almost 100 releases out within the first 12 months.”

What have you lined up for this year?

“Lots of label party events lined up nationwide as well as across the water.
“Currently working with Arts Council, Blubell and various groups delivering DJ skills/digital workshops across the North West. As well as all the usual touring, looking forward to heading out to the Far East again through the year and playing across Ireland, Scotland etc.
“Obviously, the big one this weekend  DaCosta Records first birthday and looking forward to headlining Holi Colours Festival next month. My new track, 'Mermaid,' is out 28th February.”
Celtronic is 20 this year….

“Fantastic to see a local brand not only endure but go from strength to strength.
“Long may it continue, more power to them.”

What would you tell young women starting out?

“Don’t be afraid to get involved. Go to a workshop, got to a course, go to events.
“If you’re not invited to the party, then start your own.
“Appreciate your local scene, learn and develop there. Be it, own it, do it!.”

The latter obviously refers to New York’s Daddy Long Legs making a welcome return to Derry this Friday night in Sandino’s.
They’re 'the city's' most beloved blues bashers have been huffing and puffing and blowing houses down on a nightly basis, on their infinite world tour and always bring an elevated level of rough and ready intensity to contemporary lo-fi blues, with their explosive fire ceremony.
A Daddy Long Legs show is equal parts roots rock, blues and guttural soul, stripping down old standards and making them shiny and new again.
Some of the originals are like an all-out spiritual revival, while others are hauntingly beautiful. Also, on the bill are Protex, a Belfast punk band which formed in 1978. Their first records were issued on Good Vibrations records.
They formed part of the first wave of Belfast punk bands along with the likes of label-mates The Undertones and Rudi. Tickets are £12 and can be acquired from Eventbrite.
As if that wasn’t enough, Stefan Murphy will be playing another intimate gig in the Grand Central this Saturday.
If you were there for the last one you don’t need reminding of how special it was, if you weren’t, he kicks off at ten on Saturday and it’s free.