“This stunning creative piece of public art is a powerful expression of optimism and hope for a positive and peaceful future." 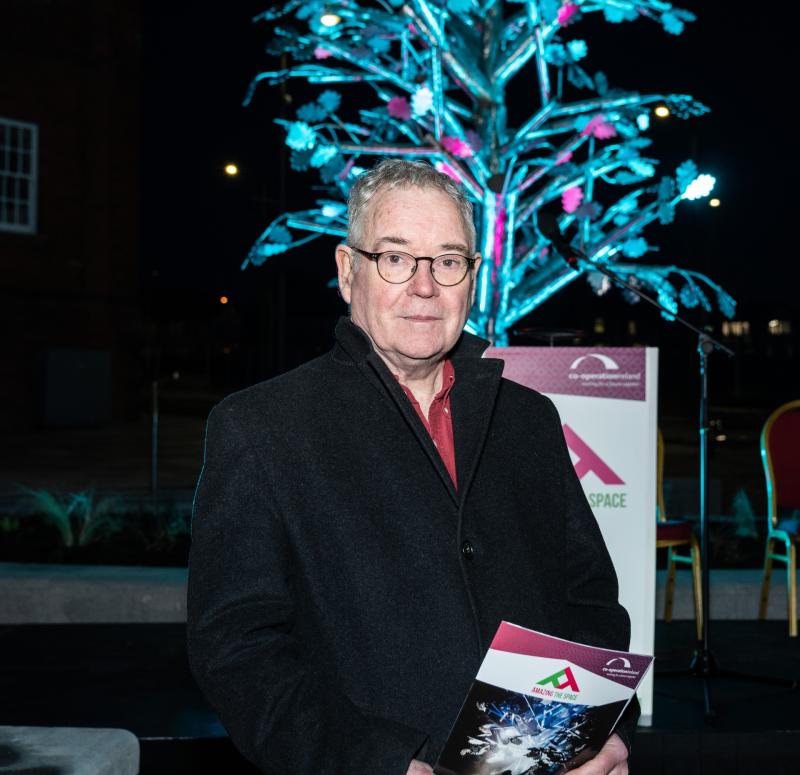 Peace Pledge Tree sculptor Maurice Harron pictured in front of his creation that will serve as a permanent tribute to the Amazing the Space peace project coordinated by Co-operation Ireland.

A Peace Tree sculpture made by one of Derry’s finest artists has been launched at Ebrington Square.
The permanent tribute to Ireland’s largest youth-led peace event was unveiled at the former army parade ground on Friday.
In attendance to launch the project was Head of the Northern Ireland Civil Service David Sterling, along with members of Co-operation Ireland’s Amazing the Space programme and the local Pathway to Peace initiative headed up by Rev Dr David Latimer.
The impressive Peace Pledge Tree is a seven metre high sculpture created by local artist Maurice Harron.
He is a highly regarded sculptor who has created iconic pieces including ‘Hands Across the Divide’ at the end of the Craigavon Bridge, ‘The Tinneys’ in Strabane and ‘Celebration’ situated in Creggan.
Peace pledges are etched on the leaves of the tree, written by pupils from over 400 schools across Northern Ireland, and the border counties of the Republic of Ireland. They are written in both English and Irish.
One young pupil’s vow reads: “I pledge to express my feelings with patience, not anger or frustration. To be loyal and supportive and avoid selfish choices.”
Funding for the tree was provided by The Executive Office.
Co-operation Ireland’s ‘Amazing the Space’ project was launched in 2016. The Duke of Sussex Prince Harry attended the event in 2017 and 2018 when the schools who took part reunited to reaffirm their pledges and share their peace building experiences.
The tree was designed to be a permanent reminder of the work of the young people.
The late deputy First Minister Martin McGuinness and former First Minister Arlene Foster were among a number of politicians to publicly support the event, with both parties submitting pledges along with the eleven local councils.
Amazing the Space came from an idea by Rev Dr David Latimer and was developed in conjunction with the peace building charity Co-operation Ireland. 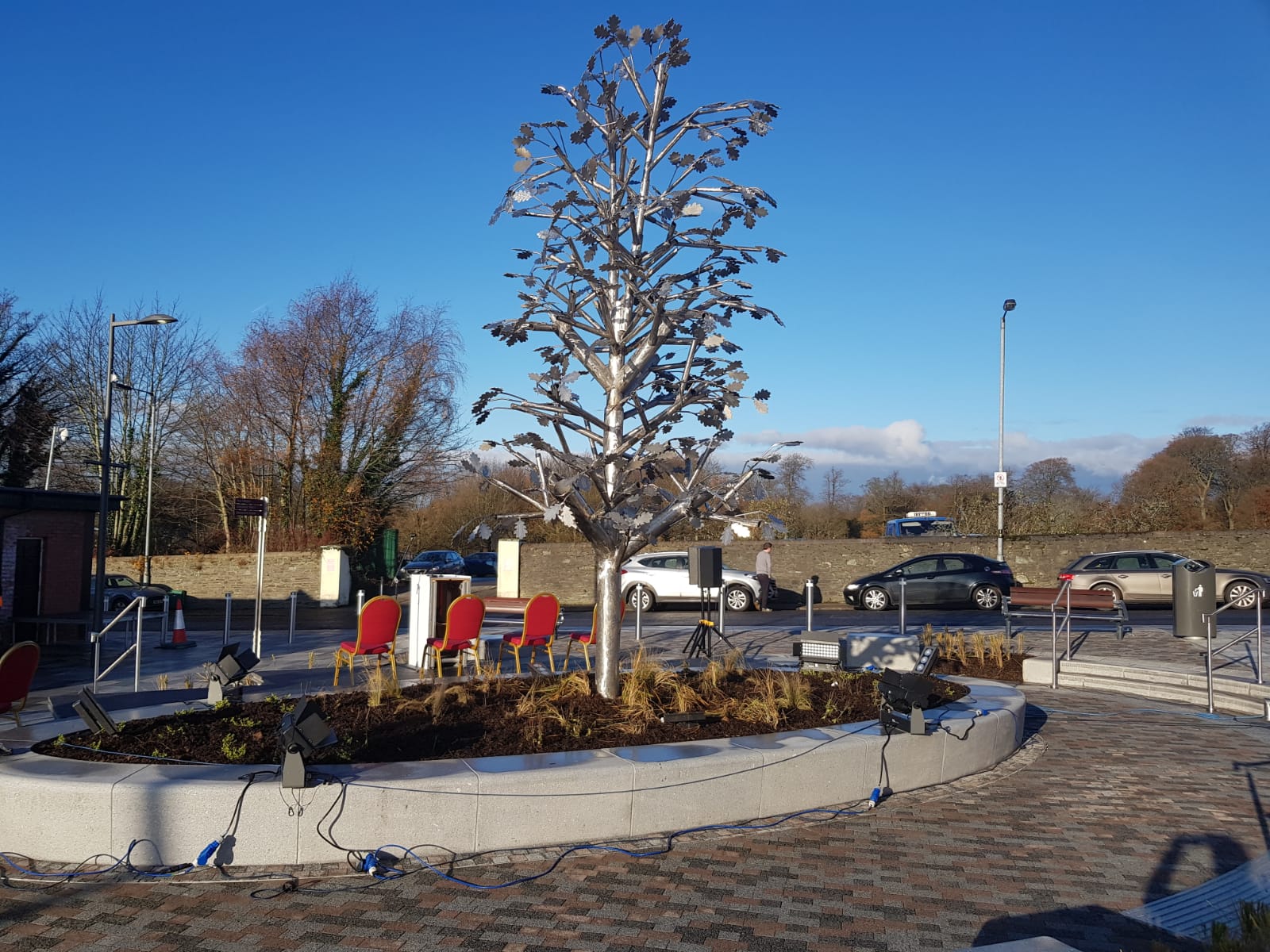 Derry and Strabane Mayor, Michaela Boyle described it as a “truly innovative project” that brings together young people from across the island of Ireland to express their personal aspirations for a peaceful future.
“This stunning creative piece of public art is a powerful expression of optimism and hope for a positive and peaceful future. I am delighted that it will be located at Ebrington for future generations to enjoy.
“I would like to acknowledge the role played by all the young people involved in Co-operation Ireland’s Amazing the Space project and the role they played in bringing forward fresh ideas with an open mind and a positive energy.
“The work that is being done at a local and global level is very important to sustain and build a peaceful future for everyone,” she added.
The Head of the NI Civil Service, Mr David Sterling, believes the ‘Peace Tree’ is a fitting legacy of the Amazing the Space programme.
He said: “The tree forms part of the Pathway to Peace reaching from the Guildhall, across the Peace Bridge and ending at the Peace Pledge Tree, here at Ebrington.
“This is a shared space for everyone from across Northern Ireland and beyond. I have no doubt that the pledges made by over 400 pupils will be read and enjoyed by many.”
Meanwhile, Co-operation Ireland CEO Peter Sheridan said: “Amazing the Space was designed to allow young people to have their say in the promotion and development of a peaceful society in Northern Ireland and we in Co-operation Ireland are delighted that the effort put in by young people since 2016 will have a permanent tribute here in the city where the project was first established.”
Reverend Dr David Latimer declared it the “most exciting” peace initiative he’s been involved with and an enjoyable partnership with schools across the nine Counties of Ulster, since 2012.
He continued: “Young people, wherever they’re living, hope for a world free of poverty, inequality and exploitation. They want a world free of discrimination on the grounds of race, colour, creed, language and gender.
“Our young people, with their vibrant ideas and clear perspectives, can reveal a better path. Their words and wisdom, displayed within The Peace Tree, can be a Beacon of Hope that will inspire many to turn their dreams of peace to reality.”