REVIEW: Derry audiences on their feet for opening night of 'We Will Rock You' 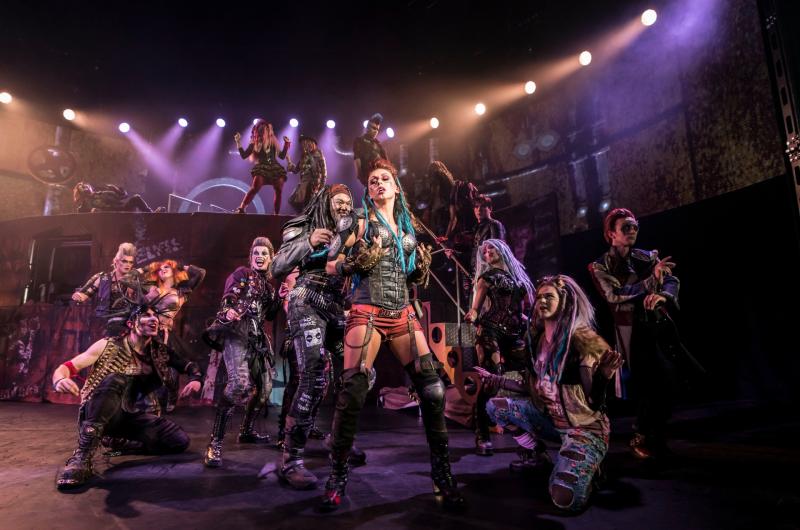 Amy Di Bartolomeo as Oz in 'We Will Rock You' which is on at the Millennium Forum until Saturday.

Smash hit Queen and Ben Elton musical ‘We Will Rock You’ has come to Derry and had audiences on their feet and belting out the band's classics on opening night.
The week long run promises to deliver the spirit and spectacle of one of the world’s best-selling acts and features 24 of their best loved hits.
Original Queen fans were joined by millennials and teens for the energetic show which runs at full tilt, before a spine tingling finale of everybody's favourite Queen song 'Bohemian Rhapsody'.
‘We Will Rock You’ is set in a distant, dystopian future where Earth is called Planet Mall and its inhabitants wear the same clothes and think the same thoughts.
It tells the story of Galileo, Scaramouche, Killer Queen and the other ‘Bohemians’ who are on a journey to discover the Holy Grail of Rock and restore the free exchange of thought, fashion and music.
The audience are drawn into the action and become part of the story line as rock is rediscovered at Wembley Stadium, the venue for Queen's legendary 1985 Live Aid performance.
The 2019 tour of the 2003 show has been updated for a modern audience with Snapchat and Instagram being added to the list of ways Planet Mall's young inhabitants are controlled.
Strutting into Freddie Mercury's shoes as the male lead is Ian McIntosh who does a fabulous job of capturing the pomp and power associated with the band.
Elena Skye as Scaramouche, Jenny O’Leary as Killer Queen, Adam Strong as Khashoggi, David-Michael Johnson as Brit and Amy Di Bartolomeo as Oz deliver the kind of world class vocals that will take your breath away.
Audience favourite was Michael McKell as Buddy, whose pitch perfect delivery of a camp Keith Richards inspired character had everyone in stitches.The scale and spectacle of the show with a huge ensemble cast and futuristic set all adds to the drama, but it is the Queen songs that steal the show.
With We Are The Champions, Radio Ga Ga, I Want To Break Free, Somebody To Love, Killer Queen, Under Pressure,Bohemian Rhapsody, Another One Bites The Dust and We Will Rock You all featured rock fans will not be disappointed.
'We Will Rock You' is at the Millennium Forum until this Saturday October 26.
For tickets call the Box Office on 71264455 or log on to www.millenniumforum.co.uk