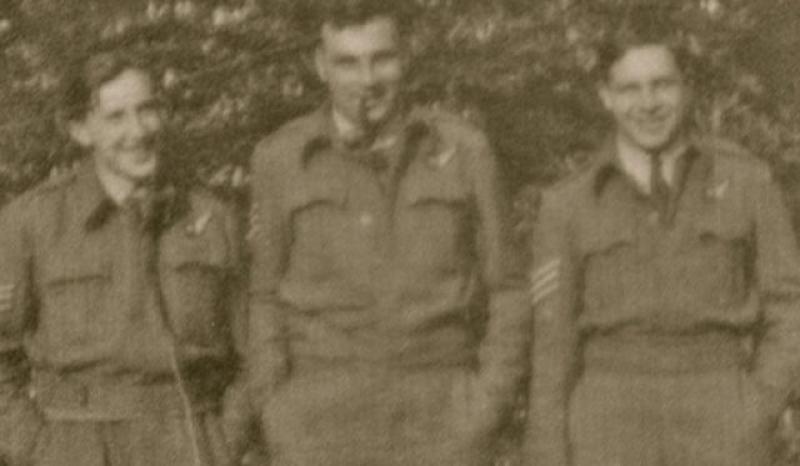 Derry born Richard Bolitho is pictured on the far right. He was killed aged just 23 whilst taking part in the dam busters raid in May, 1943.

William Bolitho, Richard's father, was a Cornish commercial traveller in the seed business who stayed on in Ireland after marrying Jane Cuthbertson, the daughter of a local land steward, from Braehead just outside the city.

In 1927 the Bolitho's moved from Derry to the town of Kimberley in Nottinghamshire where they bought a hotel. Presumably, while his mother and father got the new business up and running, Richard moved in with his aunt Emily who owned a local fruit and vegetable store. But, after her death, William Bolitho sold the hotel and took over the shop.

The young Richard Bolitho, an only child, was educated at the nearby Church Hill School and from there won a scholarship to Heanor Grammar School in 1931. He joined the RAF in 1940 but it wasn't until 1942 that he was selected for aircrew training.

After qualifying as an air gunner Bolitho was posted to an operational training unit where he teamed with five others and they all flew together for the first time on February 13, 1942. Six weeks later they were all posted to the newly formed 617 Squadron.

Before WWII the British Air Ministry had identified the industrialised Ruhr valley as an important strategic target. The dams along the valley were the valuable source of providing hydroelectric power and pure water for steel-making as well as drinking water and water for the canal transport system in Germany.

The belief was that attacks on the dams with large bombs could effectively cripple the manufacturing base heavily prized by the Nazi's but at this stage the RAF had been unable to accurately hit hard enough to achieve that aim.

It was calculated that a surprise nocturnal attack could work but there was no explosive device capable of achieving it.

This is where Barnes Wallis came in. A scientist, engineer and inventor in early 1942 he had begun experimenting with skipping marbles over water tanks in his garden. From this he developed a paper called 'Spherical Bomb-Surface Torpedo', the idea being that a bomb could skip over the surface of water, avoid torpedo nets and sink directly beside a battleship or a dam and act as a depth charge with the surrounding water concentrating the force of the explosion on the target.

Wallis also developed backspin on these devices that would cause the bombs to trail behind the aircraft that dropped it and decreased the chance that the plane would be damaged by the explosion. It also increased the range of the bombs and prevented them from moving away from the target wall as it sank.

After initial doubts, the RAF accepted Wallis 'bouncing bomb' for attacks on the Mohne, Edersee and Sorpe dams in the Ruhr valley.

Operation Chastise was carried out on 16-17 May, 1943 by Squadron 617 which included Richard Bolitho.

Using two spotlights to gauge the correct height, a modified Lancaster Bomber dropped a backspin drum shaped bomb which bounced over the dams' torpedo nets hit the wall and spun down to the base before exploding.

The Mohne and Edersee Dams were hit and caused catastrophic flooding of the Ruhr valley and the villages in the Eder area. The Sorpe dam sustained minor damage.

By necessity of achieving their aim, one plane flew so low that it hit the sea with the result that its bomb was torn off and scooped up seawater into the fuselage. Another plane was consumed by flames when it ploughed straight into high voltage electricity cables.

However, some historians have argued about the levels of success that the raids achieved stating that the dams were repaired in a matter of five months. The head of the RAF, Sir Arthur 'Bomber' Harris thought that the entire episode had been 'harebrained' all along later wrote: "I have seen nothing to show that the effort was worthwhile except as a spectacular operation."

The inventor of the 'bouncing bomb' Barnes Wallis was awarded the sum of £10,000 for his war work from the Royal Commission on Awards to Inventors. But, because of the loss of so many people's lives during the raids he donated the entire amount to Christ's Hospital School in 1951 which allowed the children of the RAF personnel killed or injured to attend the school.

Richard Bolitho's last leave from the RAF before what became known as the Dam Busters raid was spent at home in Kimberley, Nottinghamshire where he was joined by his colleagues Flyod Wile, John Kinnear and Albert Garshowitz.

Days later, in the early hours of Monday, May 17 1943 all of them were killed during the raid.

Sergeant Richard Bolitho was rear gunner on the mission his Lancaster Bomber was sent out on the first wave of aircraft taking part in the attacks. Their plane went down near Marbeck in Germany after being hit by anti-aircraft fire and were buried at Borken. They were later reinterred at Reichwald Forest War Cemetery.

In all, 133 men in 19 planes took part in the attacks on the dams-53 of them died and three were captured.

The Derry born Dam Buster is remembered on a war memorial which was first placed at his former school, Heanor Grammar School and later moved to Marpool All Saints Church in Nottinghamshire when the school closed in 1976. Richard Blothio's name is also on the war memorial at Kimberley, the village where he grew up.

In May, 2017, 75 years after the Dam Busters raids on Germany portraits of all 133 men painted by artist Dan Llywelyn were unveiled at the Bomber Command Centre in Lincoln and the Dambusters Inn at Scampton in Lincolnshire from where the Lancaster bombers departed.

In 1946, three years after Richard Bolitho's death, his parents returned to live in Northern Ireland and saw out their days in Portrush.

Their daughter Jane Bolitho, Richard's mother, died aged 89 on November 13, 1964 and is buried with her parents. Her husband William had died 11 years before her on May 9, 1953  aged 73 but is buried in his own plot in the city cemetery.

CAPTION: Derry born Richard Bolitho is pictured on the far right. He was killed aged just 23 whilst taking part in the dam busters raid in May, 1943.