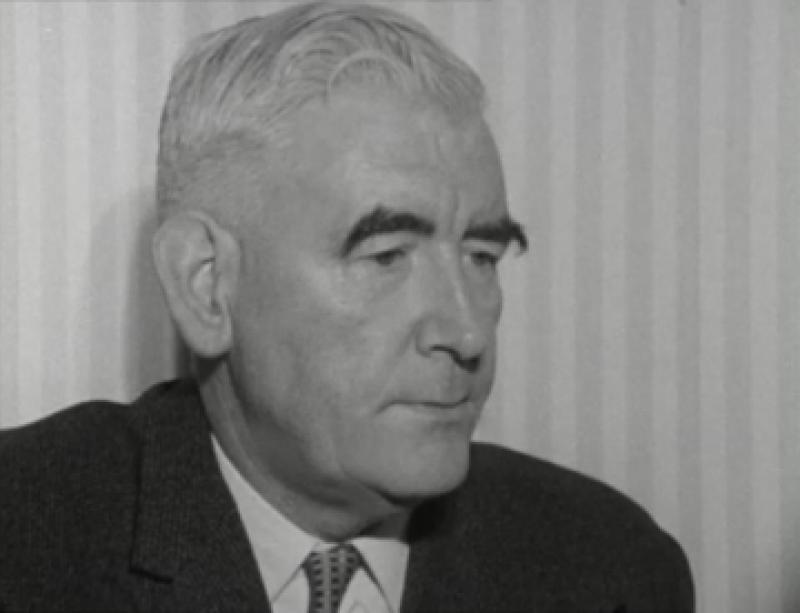 Although he died over 30 years ago, Eddie McAteer is still remembered in Derry as a towering figure in nationalist politics.

However, the tall well-built figure with a fine mop of grey hair was actually born in Coatbridge, a town in Lanarkshire roughly eight miles from Glasgow on Burns Day-January 25, 1914.

His father Hugh was born in Fanad in 1884 and his mother Bridget hailed from the Illies in Buncrana in 1879. Like thousands more the young couple left Ireland via Derry in search of work. But, in 1915 the family moved back to Derry with their infant son and into a house on William Street.

As a young child in the 1920s Eddie McAteer experienced first hand the Irish War of Independence. The sectarian nature of that conflict in Derry claimed dozens of lives in the summer of 1920 when the IRA, RIC, UVF and the British Army fought it out and often in the city centre.

One particularly heinous incident happened in June,1920 when soldiers from the Dorset Regiment fired indiscriminately into the Bogside not from the McAteer's home.

Eddie McAteer recounted that period many years later when he said: "I recall the sleepless nights when the soldiers paraded the streets, with suitable language,' the 'so and so's' to keep out of the way. I crept out on my tummy, out to the hall and gazed to the street from under the door at the boots of the soldiers as they passed away."

The period was also characterised by dire poverty. Like thousands of other households, the only money coming into the McAteer home came when the man of the house found occasional work at the city's dock or Mrs McAteer got work in the shirt factories.

It was often the case that the family relied on stale bread from the nearby Brewsters Bakery for something to eat.

In 1930, after his education at the Christian Brothers, Eddie sat the entrance exam for admission to the British Civil Service. Despite being just 16-years-old and being amongst the youngest of the exam candidates he achieved a top five place from over 2,000 entrants.

Initially, the young McAteer was stationed as a tax official in Enniskillen but later returned home when he got a post at the Custom House in Derry.

Whilst Eddie McAteer chose and remained resolute to constitutional nationalism throughout his later political career his brother Hugh became embroiled in the IRA.

In July, 1936 the McAteer household was raided by the RIC. A handgun, ammunition, gelignite and IRA documents were found in the home. Eddie, his father and brothers Hugh, Dan and Sean were all arrested.

All of the charges against them were later dropped, except for Hugh who refused to recognise the court when he was tried and he was sentenced to seven years at Crumlin Road jail.

Upon his release, Hugh became Chief of Staff of the IRA and went on the run until he was recaptured in September, 1942. He and three fellow prisoners mounted a famous escape from Crumlin Road prison in January, 1943 but they were captured once more and jailed again.

Eddie McAteer was also a keen sportsman and became a keen amateur boxer and also took up running, rowing, fencing as well as tennis. It was at the Alpha Tennis Club that he met his future wife Rose Magee . They married in 1941 and the couple had ten children together-Nuala, Hugh, Fergus, Rory, Shaun, Maura, Eamon, Sheila, Niall and Grainne.

His strongest sporting association was perhaps however with the GAA.

In 1943, against stiff opposition from then Bishop of Derry, Dr Neil Farren, Eddie McAteer and Jack Timmons kick-started the revival of the sport in the city when they bought Celtic Park for £1,000.

As well applying for several city based clubs, McAteer later held many high ranking positions within the GAA and coupled that with his enthusiasm for the Irish language-at one point even publishing a beginners guide to Gaelic.

It was the following year, 1944, that Eddie McAteer resigned from the Civil Service and went to train as an accountant with EF McCambridge & Co and later established his own practice in Derry.

In June, 1945 at the age of 29 Eddie McAteer decided to enter the world of politics. He contested the Mid Derry seat and was elected unopposed. When he began his maiden speech in the Stormont chamber in Gaelic, he was interrupted by Prime Minister Sir Basil Brooke who informed the Derry man that no 'foreign language' could be spoken in the House.

On March 17, 1951 members of the Nationalist Party, including Eddie McAteer, took part in a march in Derry to mark St Patrick's Day. The parade had been banned by the Stormont regime and was subsequently attacked by the RUC and led to the arrest of nationalist councillors James Hegarty and James Doherty amongst others.

When the Stormont election of 1953 came about, Mr McAteer decided he would stand in Foyle as opposed to Mid Derry and was successfully elected again. By this stage also he was chairman of the Anti Partition League of which he had been a founder member back in 1945.

The previous year, in 1952 he had also been elected to the old Londonderry Corporation and remained there until 1958 when he became the Deputy Leader of the Nationalist Party at Stormont.

Prior to the establishment of the League, there had been no rank-and-file organisation of Irish nationalists since the Irish Union Association and Northern Council for Unity had become inactive in the late 1930s. This became a major complaint among supporters of the Nationalist Party, and at the Northern Ireland general election, 1945, some Nationalists candidates - including Eddie McAteer and Malachy Conlon pledged that if they were elected, they would organise a convention with the intention of uniting all Irish nationalists in one membership organisation.

McAteer and Conlon were both elected, and onNovember, 1945 they presided over a convention in Dungannon. The convention was attended by about 480 people, including all Nationalist Party Members of Parliament(MPs) and Senators.

The convention elected a standing committee. Conlon became its first Secretary and James McSparran its first Chairman. It also collected more than £1,000 to begin campaigning activities.

In 1964, with the death of Joe Stewart, Eddie McAteer became the leader of the Nationalist Party and the voice of nationalism in the North. It was an an apt time for him to assume the leadership as the initial rumblings of the coming Civil Rights campaign had begun with agitation beginning on the issue locating the North's second university at Magee College in Derry. It was a campaign embraced by Eddie McAteer amid a collective that crossed political boundaries dedicated to stopping its placement in Coleraine.

The UDAC or University for Derry Action Committee also included the unionist Mayor of Derry, Commander Albert Anderson who said at the time that it was the "most important issue to come before this city this century."

In the end, everyone in the city was 'slapped' in the face when the university was indeed situated in East Derry. It was of course a portent of much worse to come.

As the 1960s progressed McAteer was involved at the forefront of campaigns over the dire housing conditions in the city, especially the dreadful situations at Springtown and Belmont camps, the continuing political discrimination caused by gerrymandering and religious discrimination at the heart of employment.

When the campaigns began to manifest themselves in the form of on street protests, Eddie McAteer had already sensed that the state would meet the protests with physical force.

He feared that someone protestors would ultimately pay with their lives for civil disobedience and was reluctant to politicise the Civil Rights protests.

"I can get the people on the streets, but who is going to get them off again?," he said.

Despite his reservations McAteer was again to the front when the Civil Rights protest of October 5,1968 was batoned off the streets by the RUC.

Next day, October 9 Eddie McAteer gave a first hand account of the previous days incidents and the rising anger in Derry to Taoiseach Jack Lynch.

A few months later, in February 1969 there was a Stormont election and Eddie McAteer was defeated by a young John Hume. He returned to the electoral arena in 1970 when he contested that year's Westminster election as a Nationalist Unity candidate, losing to the sitting unionist representative, but took 36% of the vote.

Stormont was suspended in 1972 and abolished in 1973. But, in June of 1973 an election took place for the Northern Ireland Assembly-the ill-fated first attempt at power sharing here. Eddie McAteer stood in this election and narrowly missed taking a seat with 3,712 votes.

With the rise of the Social Democratic and Labour Party, the Nationalist Party was in total disarray. Eddie McAteer departed from its ranks and formed the Irish Independence Party (IIP) with his remaining supporters.

Fergus McAteer, Eddie's son and also an accountant, became a very prominent figure of the IIP and was elected to Derry City Couuncil in 1973, 1977 and again in 1981. He narrowly held the seat again in 1985 when the IIP saw its representation across the North reduced from 21 seats to just four. The party was dissolved before the next local election in 1989.

In his formative years there is little doubt that Eddie McAteer was a militant nationalist and at times backed civil disobedience. But, at the Troubles took a grip on society he repeatedly called for moderation. After his days as an elected representative he continued his involvement with other issues such as anti-internment protests and prisoner welfare.

Eddie McAteer passed away on March 25, 1986 aged 72 and his devoted wife Rose also passed away on November 1, 1988. They are buried together in Derry City Cemetery.