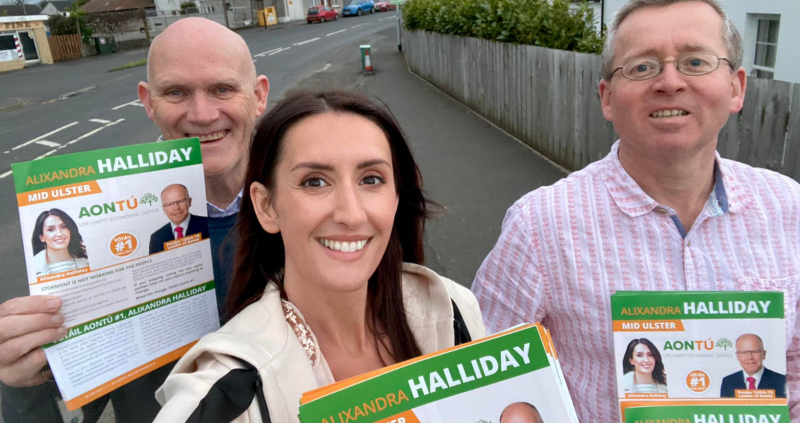 If you were picking a team and discovered that those you picked were not performing as a team what would you do? Would you keep picking the same lot again and again? That is the choice facing the people of Mid Ulster and Northern Ireland and the good people of Mid Ulster now have a chance to change the players and hopefully obtain a better outcome. This opportunity is now available in the person of Alixandra Halliday. Alixandra Halliday is a mother of three, graduate of the North West Regional College and holds a Honours BA degree from the University of Ulster. She has worked in the retail sector and hospitality sector – giving her first-hand insight into the damage to these sectors by the Covid-19 pandemic. Then, in 2017 Alixandra travelled to Greece to undertake humanitarian work helping Syrian refugees. She also works with her family’s business to overcome the challenges of Brexit.

Alix is a committed human rights and community activist, deeply critical of the neglect of Mid Ulster by Stormont. Despite electing the Deputy First Minister, Mid Ulster has not had the investment in jobs, housing and infrastructure that we are entitled to. Families are suffering financially, be it in terms of the cost of fuel, the cost of electricity and the cost of food. In Stormont, Alixandra will lead the fight to reduce VAT and Excise Duties, for investment in Mid Ulster, and to stand up for human rights for all.

Alix, who works part-time at her husband’s frozen foods business, says that the issue of abortion is just one of the concerns that drew her into politics. She noted It’s so close to a lot of people’s hearts, and it’s a big one because of how it was brought in via Westminster, and because it’s quite recent, this is people’s first real opportunity to vote since it happened. “We stand for life and for protecting women as well. We believe life begins at conception and would see it as being here for life — and that runs through everything from education to housing to the cost of living “But we’re not a single-issue party and there were a lot of things which drew me in. The Aontú stance on a number of issues, particularly around Stormont and education funding, appealed to me also.”

Despite being a newcomer to the world of local politics, Alix is getting a warm reception on the doorstep. She added: “It’s quite nice actually. It gives you a spur to keep going whenever your message resonates with people. One of the main issues people want to discuss are the dramatically increasing cost of living. A lot of people are desperate about how they will manage to cope financially in the months ahead and about how the island of Ireland has changed from being one of the safest countries for unborn children to one of the most unsafe. Obviously the other issue people have are the fact that Stormont isn’t working. “I’ve always had an interest in politics and I’ve always wanted to stand up for human rights, which I have done through my own humanitarian work. It’s always been a passion of mine. “The way Northern Ireland has went in the last couple of years, I couldn’t sit back any longer. My goal in life is to try to make a difference to the lives of all our people regardless of religion, race, or political affiliation. If you want REAL change you will not achive it by voting for the same team – vote Aontú for compassion and the principled Republican integrity of Cherish all the children of the Nation Equally.