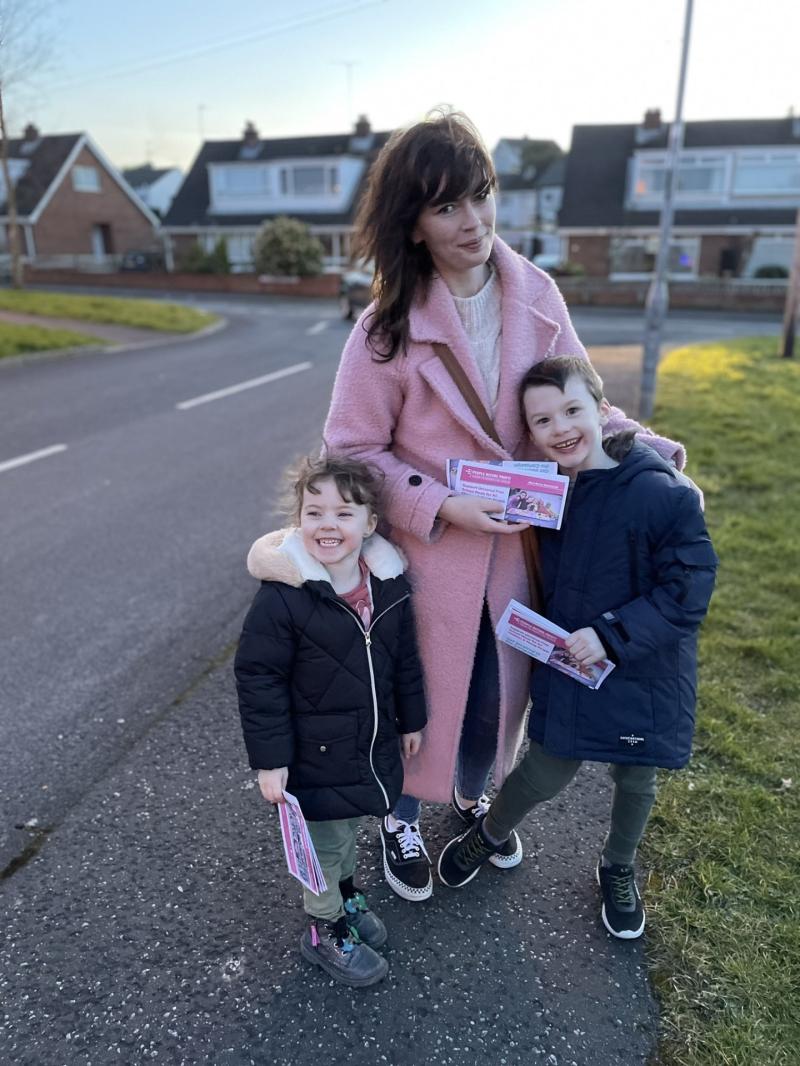 Amy is often joined by Aiden and Lucia-Jane, as well as partner Mark, while out canvassing.

People Before Profit's East Derry candidate Amy Merron will be in the midst of final-year university exams as the votes are counted in Magherafelt on May 6. She spoke to Liam Tunney about the party's ambitions, the pro-choice movement and canvassing with kids.

Last week, People Before Profit (PBP) candidate for East Derry, Amy Merron, tweeted a picture of her alongside a defaced election poster.

The tweet, showing her face made up to match the graffiti, attracted over 3,000 likes and 251 retweets as she satirised the creation as 'Bannsky'.

The hashtag was a nod to the poster's location where the Old Bridge crosses the river in Coleraine, not far from where Merron herself grew up in Portstewart.

Her Mid Ulster-born parents met there while at university, but the now-25-year-old found her own study plans postponed.

“I had my first child whenever I was 18, right as I was coming out of school, and obviously that put all my plans on hold,” she told the County Derry Post.

“I'd planned to go to university to study nursing, so this put a bit of a spanner in the works, but I went back to university a couple of years ago and I'm in my final year now, studying psychology. 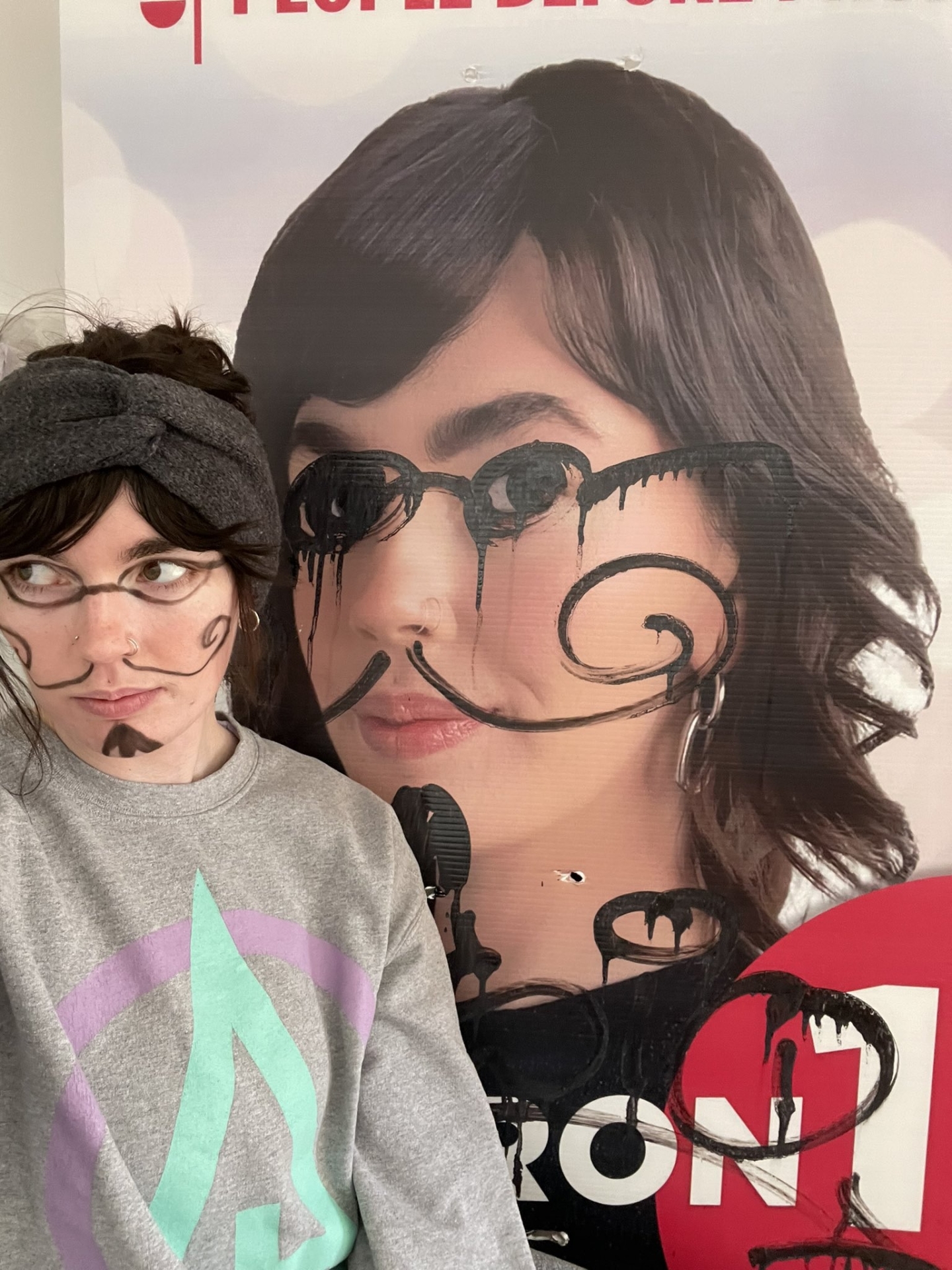 Amy's tweet satirising the defacement of one of her posters attracted lots of attention on social media.

“I've been trying to balance doing my dissertation and my final year with campaigning and it's been quite stressful.”

Merron joined PBP back in 2019, seduced by the wave of enthusiasm around then-Labour leader Jeremy Corbyn's Westminster campaign, but there was little party presence on the north coast.

“We had to start from scratch with the branch up in East Derry,” she said.

“I would have headed up to Belfast or Derry to attend protests and rallies, but it's about building something for yourself and the people around you.

“That's what I've been trying to do up here so that there are things to get involved in, ways people can voice their anger like they have been doing recently.”

The party launched their manifesto last week; a blueprint for utopia that seeks to redistribute wealth to help those in most need.

It has attracted scepticism over its viability, with some commentators raising eyebrows on how it will be paid for, but Amy insists the money is available to make it work.

“Through Covid, we found money for additional support for businesses and things like that. People sometimes talk about this 'magic money tree', but we know it's there,” she said. 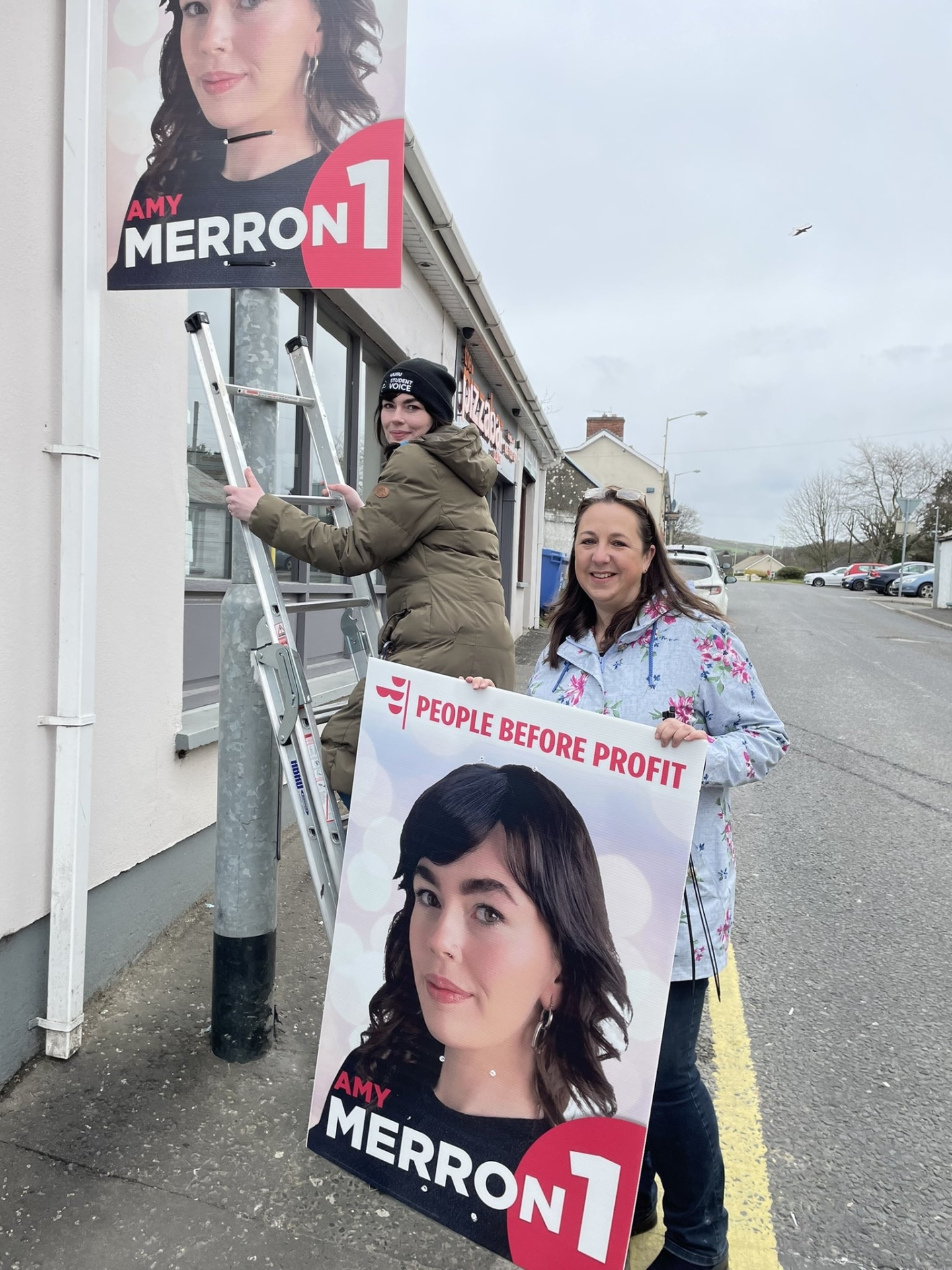 The north coast branch of People Before Profit is still in its infancy.

“Our plans are to launch an Emergency Hardship Fund, which would go to everyone but the top fifth of earners.

“We would suggest a cut to rents and an increase to housing benefit, simply because rents are a huge part of somebody's outgoings. Rents should not be any more than 20% of a person's income.

“A huge thing at the moment, obviously, is the cost of energy, the cost of fuel, so we would suggest taking the private energy companies into public ownership.

“Living on the north coast especially, we have a lot of wee coffee shops and small businesses. We want those businesses to be supported in providing a £15-an-hour minimum wage for their workers.”

PBP campaigned for Brexit, a stance that continues to find a place in their manifesto, but Merron says she actually voted to remain in 2016.

“I didn't feel I had enough information on the argument, and I think that was the case for a lot of people,” she said.

“We are a socialist party, we are anti-imperialist. We don't believe in imperialism either from Brussells of London.

“We believe workers, families and ordinary people on the ground shouldn't pay the cost of Brexit, we shouldn't be footing the bill because of what the Tories have decided to hand us.

“The left, alternative vision for Brexit would have been a better road to go down, but it didn't seem to be picked up in that binary argument between leave and remain.

All pink today in Dungiven pic.twitter.com/sNRYpXkcKG

“A few years on, people are able to see that there is a bit of nuance there, and having that different perspective would have been beneficial to people at the time.”

Passionately pro-choice and a member of Alliance for Choice, Merron expressed disappointment at the Department of Health's failure to implement abortion services in some Trusts.

“The lack of commission of services has given us a patchwork quilt approach to abortion services,” she said.

“We are left with no services available in the Western Trust. People are still coming to the likes of Alliance for Choice for information on how to access services.

“It left a lot of people turning online or travelling to England during a global pandemic, which isn't great either.”

Amy describes her first Assembly Election campaign as a 'mixed bag', but the Portstewart woman has enlisted some helpers, with her two children joining her on the campaign trail.

The pair have been making the most of the opportunity.

“They've taken a load of chocolate bars off people at the doors as well, so they think it's great,” she said.

“It's almost like an ice-breaker, especially if you're going to houses where there is a young family. You're able to talk about similar things you've been experiencing.

“My four-year-old is a social butterfly, and will talk away to absolutely anybody, so that has made it that wee bit easier.”

One of the more notable lines of the PBP manifesto expressed a need for more 'elected socialists'. I asked Amy why.

“To oppose the current system we have, because it's not been working for the past 20 years or so. The establishment parties have failed us in every way possible,” she said.

“Growing up in Northern Ireland, especially where I am on the north coast, the faces have changed, the surroundings have changed, but the politics hasn't.

“It hasn't been working for the people in East Derry, and for me, socialism is a good place to start. I think of it as looking after one another and making sure everyone has their wee piece,” she added.