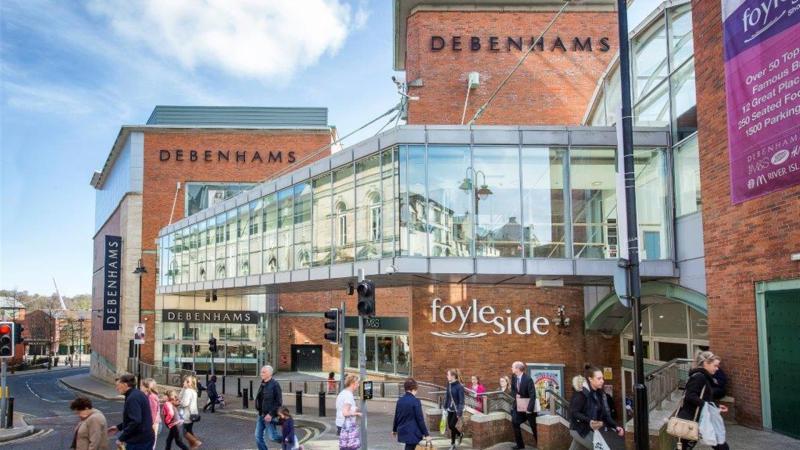 The House of Fraser store has moved into the same site at the Foyleside Shopping Centre that had been previously occupied by Debenhams before they closed their Derry operation before the end of 2020.

Retail giants House of Fraser opened its doors to shoppers last weekend as their new store at the Foyleside Centre began life in Derry.

The store takes over the shop space previously used by Debenhams which shut down towards the end of last year.

House of Fraser is believed to be bringing up to 200 jobs to the city as well as give shoppers a new department store to spend their hard-earned cash in.

Fergal Rafferty, manager of the Foyleside Centre, was pleased to welcome his new tenants saying: “Foyleside is delighted to welcome Frasers to the scheme.

“We would see Foyleside as the major retail destination for the north west region and beyond so it is important to have a retailer of the calibre of Frasers to add to an already eclectic mix of retailers in the shopping Centre.

“There was an uncertainty about the future of Debenhams for a period of time before they actually did close, so this presented an opportunity for Frasers to occupy this space when it became available.

“We were delighted to have Frasers on board as it has given the local retailing offer a welcome boost with the arrival of whole new range of high quality products, brands and choice that Foyleside shoppers have been seeking for some time

“This is a significant financial investment by Frasers and the phased opening will continue over the next few weeks with the next two floors opening just in time for the busy Christmas trading period.

“I am also fairly confident that there will be new store opening announcements scheduled within Foyleside in the coming weeks as new opportunities have arisen for retailers not currently represented in the region.

“The past 18 months have been incredibly challenging for retail, so we are extremely grateful for all the support and appreciate all the goodwill which our customers have shown us.”

A House of Fraser spokesperson added: “Frasers Group plc has opened the doors to, Frasers Derry – a dynamic 24,000sq ft retail destination in the heart of the city.

“The new Frasers store will boast an unrivalled range of beauty, fashion, premium and contemporary accessories, childrenswear and homeware. The store is located in Foyleside Shopping Centre, in a unit once home to a Debenhams – a Sports Direct will also operate in the space.

“The opening will be taking a phased approach, with Frasers open from last Friday and Sports Direct set to open in October this year. The Sports Direct will boast an unrivalled selection of brands and will also house a USC, GAME and Belong gaming arena.