'Stute win again as they overpower Ballyclare at the Brandywell 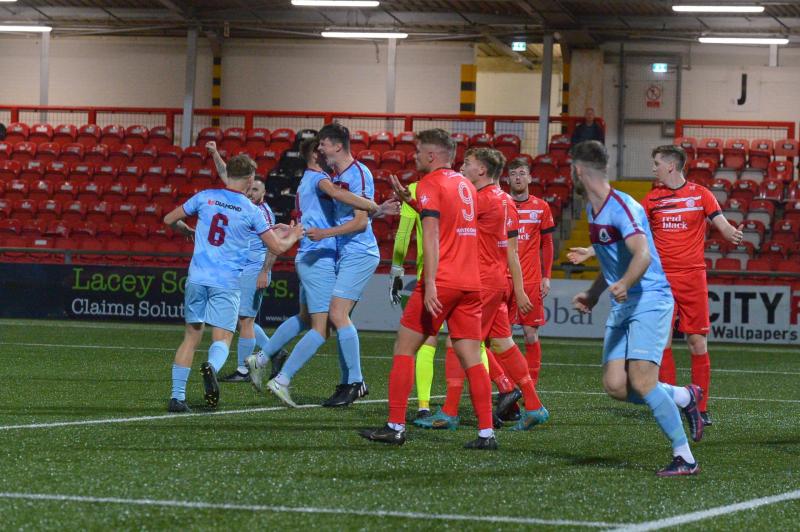 Institute made it two wins from two in the league as they overpowered Ballyclare for a deserved victory at the Brandywell.

Defeats to Premiership opposition in two different cup competitions have perhaps disguised the fact that Brian Donaghey’s team have turned things around in the league, with this victory following on from the 3-0 win away at Dergview.

The final score was in fact, flattering on Ballyclare, who can be grateful that ‘Stute passed up several chances to score, particularly in a one-sided second half. The win, coupled with successive clean sheets, is the perfect boost ahead of another difficult game, when they travel to face league leaders Loughgall next weekend.

‘Stute got off to the perfect start with a goal after just nine minutes. Cormac Burke sent in a superb delivery from ‘Stute’s first corner of the game and Shaun Leppard met it with a header at the near post, giving Ballyclare goalkeeper Declan Breen no chance from close range.

It might have been 2-0 on 19 minutes, but ‘Stute were denied a brilliant goal by an offside flag. Rhys McDermott did brilliantly to keep the ball in play on the right touchline and he exchanged passes with Mark McFadden before crossing brilliantly onto the head of Cathair Friel who got ahead of Breen to head into an empty goal. It was a picture-perfect goal, and the hoe side were understandably dismayed by the flag.

Dylan Doherty was finally tested when the ball sat up for Gary Donnelly to volley from 25 yards out but the ‘Stute goalkeeper watched it all the way, diving full stretch to save before gathering at the second attempt.

‘Stute had two chances to double their lead within 30 seconds at the start of the second half and they failed to take both. Cormac Burke showed all his experience by easily turning away from Liam Hassin and that opened up space to run into. He then picked out the run of Friel in behind the Ballyclare defence and played him in on goal, but the striker’s finish as very poor, side-footing badly wide of goal.

Friel had his chance to make up for that miss seconds later when McDermott whipped another perfect cross into the box, and the striker was unmarked six yards from goal but his downward header came back off the post and Ballyclare cleared.

‘Stute had yet another chance to finish the game off when Shaun Doherty won the ball on the edge of the Ballyclare area, and that set Friel up for another chance at goal, but this time he was denied by Breen after beating the last defender.

It looked like it was going to be one of those nights for ‘Stute, but they finally got the second goal on 86 minutes, and it was redemption for Friel. Alonzo Clarke, brilliant in the second half, won the ball in the Ballyclare half and played the striker through on goal, and this time, with a defender right on his shoulder, he kept his composure to place the ball between the goalkeeper’s legs and into the net for 2-0.