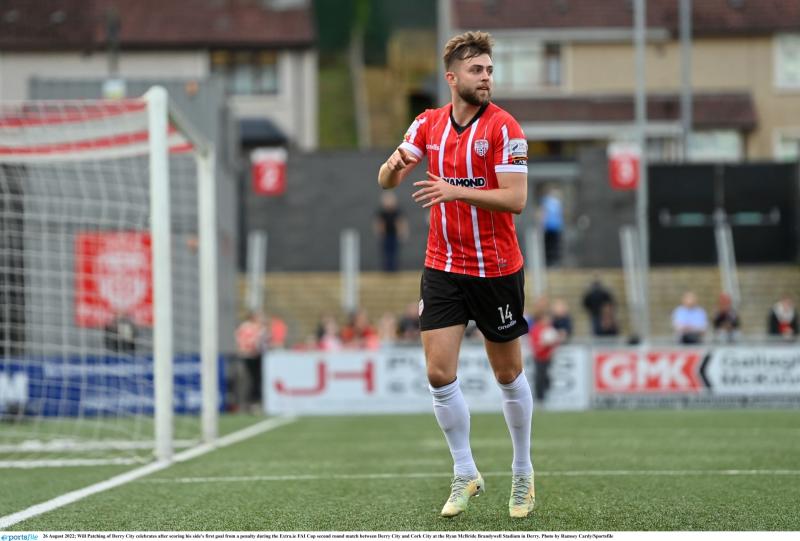 It was a comfortable evening for Ruaidhri Higgins and his players, with Cork not posing much of a threat throughout.

There was a chance for Cork to make their mark just four minutes in when defender Cameron McJannet misread a long ball forward and striker Ruairi Keating was on to it in a flash, firing a half-volley at goal which Brian Maher had to save low at his near post.

In response, Patrick McEleney went for goal twice on two minutes, but both were well off target. The City captain was more effective from his own half on 11 minutes however as he picked out the run of Ryan Graydon into the Cork area. The City winger got to the ball just before goalkeeper James Corcoran, who sent Graydon crashing to the ground, and after a moment’s thought, referee Gavin Colfer pointed to the penalty spot.

Will Patching stepped up for the first time since his penalty miss against Shamrock Rovers, and made sure there was no repeat as he hammered the ball into the top corner to give the Premier Division side the lead.

The goal was exactly what the home side wanted and they dominated thereafter, coming so close to making it 2-0 when Michael Duffy broke into the area and curled a shot past Corcoran onto the outside of the post on 25 minutes.

Cork City’s chances took a huge blow just five minutes into the second half when striker Ruairi Keating was given a straight red card after an alleged stamp on Mark Connolly. Both players fell to the ground after challenging for the ball in midair, and referee Colfer was in no doubt, producing the red card immediately.

It was just a case of Derry killing the game off after that, and the killer goal finally arrived on 72 minutes. Cameron Dummigan’s attempt at a shot was completely askew, but it was blocked by defender Walker, with the ball falling perfectly for Sadou Diallo who drilled it first time into the corner of the net from 12 yards to make it 2-0.