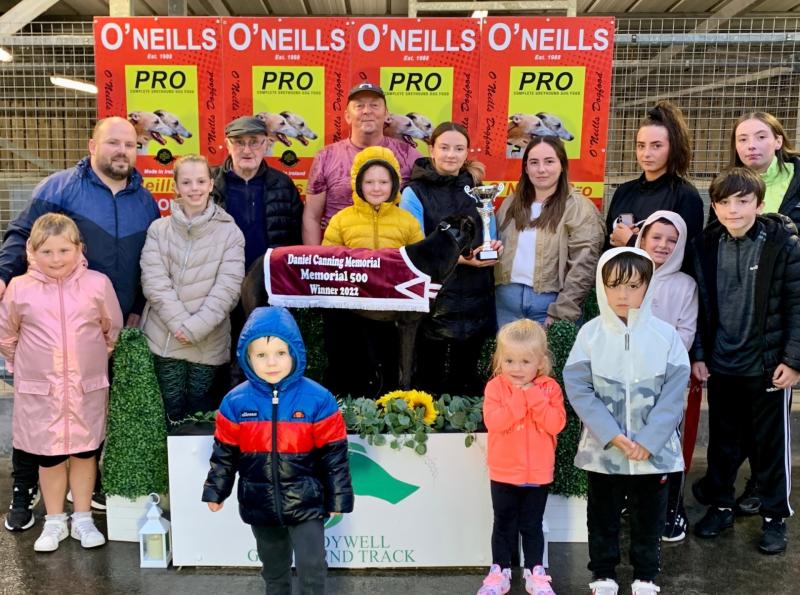 In Race 4, The Daniel Canning Memorial 500 Final was won by LONGVALE BELLA. Winning owner Miss Georgina Gibbons is presented with her trophy by Miss Jodie Canning.

Monday night at the Brandywell was a memorable one for many reasons. It was organised by the Canning family and featured the final of the Daniel Canning Memorial 500.

A minute’s silence was held during the race meeting for Jeff Thompson who passed suddenly last week. Described as one of the great racing enthusiasts in the land, Jeff was a regular attender at the Brandywell. Many tributes have been paid to Jeff online and his loss clearly has been a real shock to the racing community. We add our deepest condolences to everyone who knew and loved him.

Despite the rain, the racing enthusiasts spirits could not be dampened and racing got underway with a faultless performance from Gers Choice (Laughil Blake x Torchbearer, Jun ’20) who was having her first competitive race in Rosie Joe’s Trophy Sprint. She had only joined the kennels of Vincent McGuinness & Juliet Aldridge a fortnight ago and improved on her trial time to win in 16.88. She trapped well from the 3 box and held off all challengers.

Her dam Torchbearer is a litter sister to Ballymac Best and as well as having an exciting racing career to look forward too, Gers Choice may well have the opportunity as a brood to leave her legacy on the sport.

Janet Curran sponsored the second race, the Colum Curran Memorial Trophy 500, in memory of her brother whose anniversary is in August. Glenside Trade lined up in trap 5 for Janet’s dad Brendan, but he did not get the clearest of runs and finished third. It was Bashful Jess (Ardnasool Jet x Glenbowen Jewel, Aug ’20) that trapped fast from the 3 box and built up an early lead which she held by 2.5 lengths when crossing the line in 28.12 for Eamon O’Goan.

A very pleasing result for the O’Goan family who bred this lady from their own brood bitch. Jess has a good strike rate of 3 wins from 10 races.

Tony Teague and family have come forward again this year to sponsor the Brandywell Oaks. The Bart Teague Memorial Oaks 2022 is named after Tony’s father who had a passion for greyhound racing and sadly passed away on 25th July 2021.

The family’s ‘Old Fort’ dogs have made the prefix a well-known and respected one throughout the decades. The third race was the first of three semi-finals whereby the first and second placed bitches went through to the Oaks final and the third and fourth placed bitches went through to the Magical Bale Consolation Oaks final which is sponsored by Newpark Kennels, Westwell Racing Syndicate and Monaghan Bros, Lisnaskea. 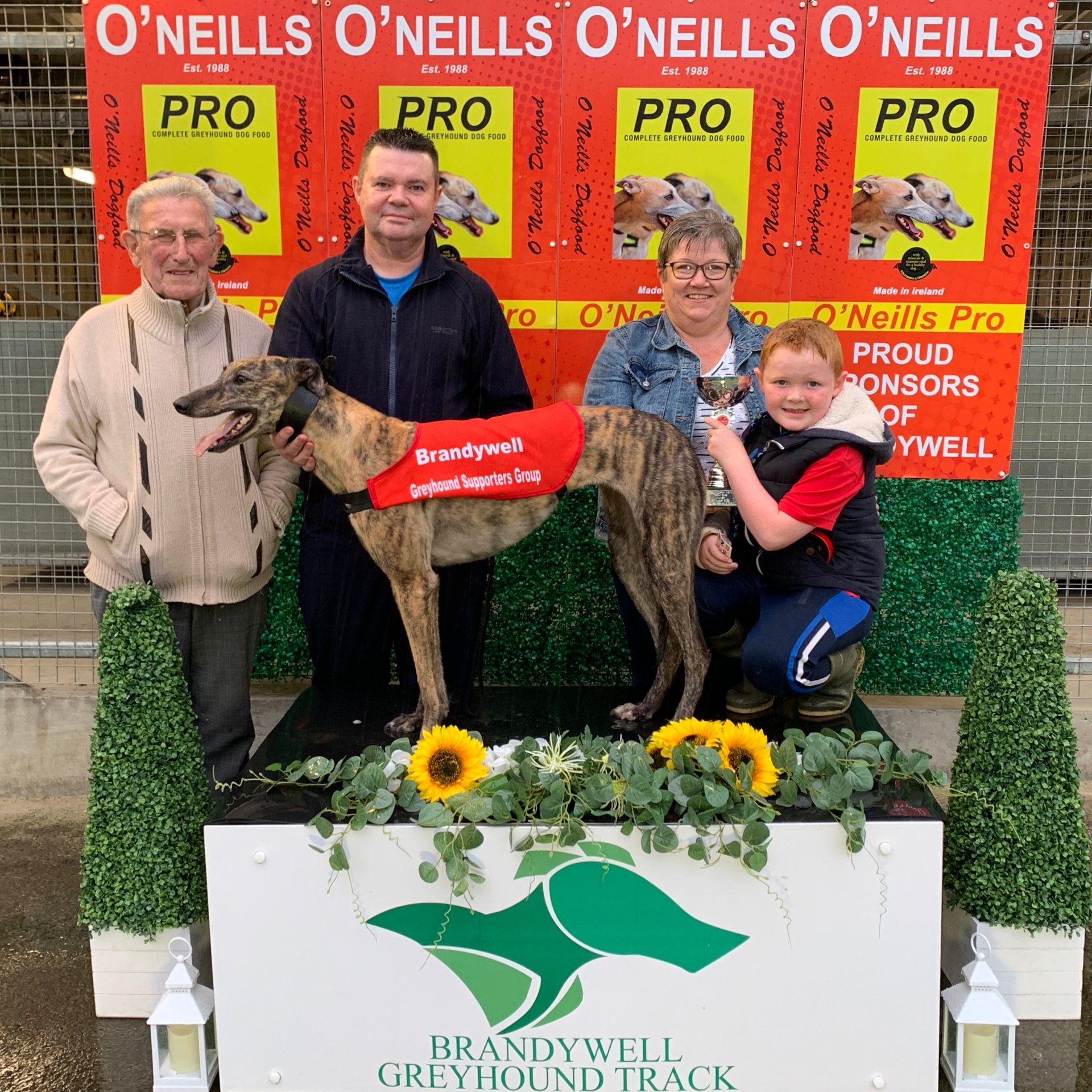 In Race 2 , The Colm Curran Memorial Trophy 500, sponsored by The Curran Family. It was won by BASHFUL JESS. On Right we have Master Enda O’Goan who is presented with the trophy by Miss Janet Curran. On left is Mr Brendan Curran, Mr Eamon O’Goan.

Kenyan Flame (Laughil Blake x Wee Tee, Oct ’20) was fast away from trap 5 and stretched out a 6 length victory when stopping the clock in 29.32 for Sean Hughes. Racing from trap 1, the ever consistent Gotheratlast for owner Tiarnan McGhee and trainer Niall McGhee was 6 lengths behind the winner and claimed her place in the final, just as she did last year. Peace and Drumcove Rozy both encountered trouble in running and will line up for the Magical Bale Consolation Oaks final.

Longvale Bella (Good News x Prints Policy, Sep ’20) was a thoroughly gutsy winner of the Daniel Canning Memorial 500 final which was sponsored by the Canning family and Track Lotto. She is a home bred bitch owned by Georgina Gibbons so this was a particularly pleasing victory for her.

Last year’s Daniel Canning Memorial 500 competition winner, Skirk Illusion, was the early leader and it looked like history was going to be repeated, however, Bella battled on very gamely to get the better of Illusion by one length as she crossed the line in 28.30. She lifted the £900 first prize along with a velvet presentation jacket and trophy and now has an impressive tally of 4 wins from only 7 races.

Pick of the bunch

The second semi-final of the Bart Teague Memorial Oaks was the fifth race on the card and Paul Gallagher’s Clongeel Pick (Droopys Buick x Hey Delilah, Sep ’19) made great use of her trap 1 draw to take up an early lead and drew clear of the field by 6.75 lengths, stopping the clock in 29.60 for trainer William Mullan.

The rest of the field encountered crowding at the first bend but Zoos Semenya for Dean Townsend picked up the other qualifying place for the Oaks final from this heat. Both Droopys Katie and Oldburrin Blitz claimed the qualifying places for the Consolation Oaks final. 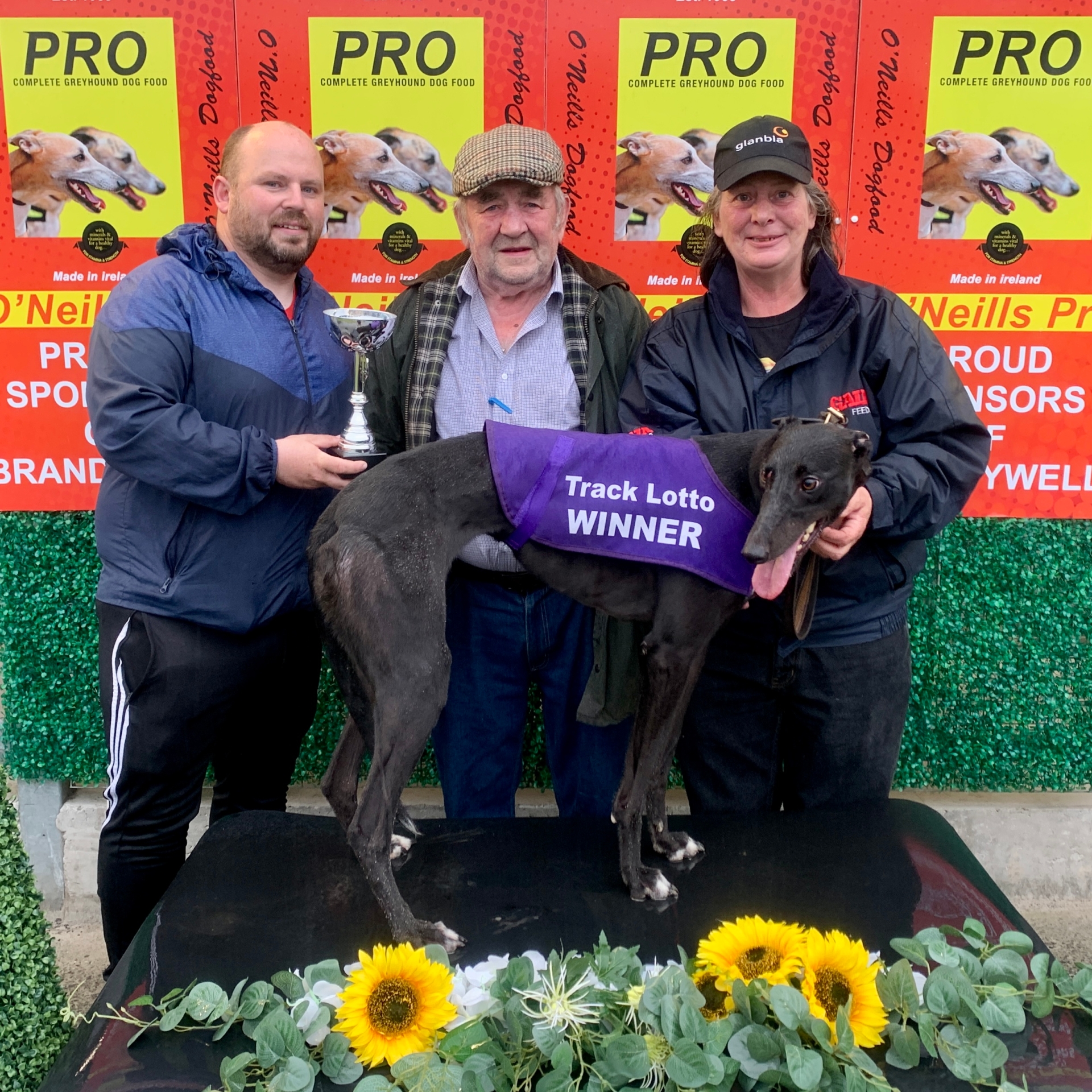 Ballymac Julia (Ballymac Anton x Art Of Illusion, Feb ’21) was a very impressive winner of the 3rd semi-final for owner Leonard O’Hanlon from County Meath. Julia was having only her second career start and trapped well from the 3 box, tracked to the inside rail most of the way and ran out an 8 length winner in 29.63. She can only improve with age and racing experience.
She is a daughter of Art Of Illusion who is the same dam shared by track specialist Skirk Illusion.

Julia looks like she has a very bright future and it is appreciated that her owner has made this very long journey to give her the opportunity to showcase her talents at Brandywell. Tiernans Molly claimed the last qualifying place for the Oaks final. Fridays Arista and Old Fort Tune qualified for the Consolation final.

Lenny McKinney, Greyhound Transporter, is a regular sponsor of events at the Brandywell and Rathronan Syd (Droopys Sydney x Slippy Elsa, Jul ’19) produced his best ever performance to win the Lenny McKinney 500 in a fast 27.78 for Kealan O’Kane. It was his fourth win from his last seven races. Fast away from trap 4, he stretched his lead to 5.75 lengths as he crossed the winning line. At just over 3 years of age, Syd appears to be thriving on his racing and gives 100% effort each time he races. 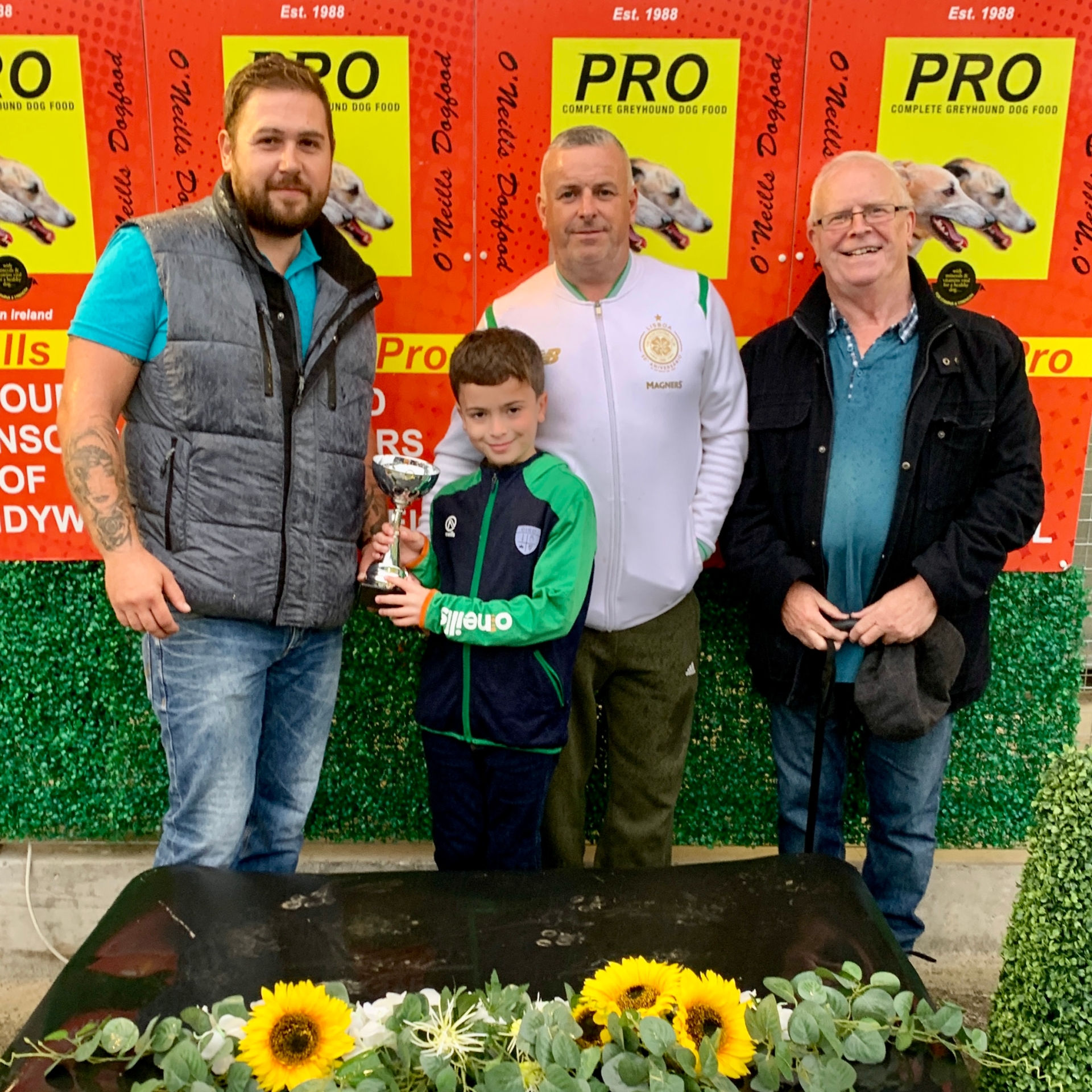 There was a thrilling finish to the last race, the Declan Jordan Sprint, as Mega Blake (Laughil Blake x Kaiser Thumb, Apr ’19) held of the fast finishing Pennylane Syd by a head. Blake had made good use of his trap 1 draw to build up an early lead. He tracked the bend well and won in 16.98 for owner Paul McFadden.

The Canning family thanked all the sponsors named above along with Harry McGuinness, Daniel Whyte, Tony Doc Doherty and the Brandywell Greyhound Supporters Group, as well as the Brandywell Greyhound Track Management for hosting this annual event. There is much organisation that goes into making a meeting like this a success and we wish to thank Kevin Canning in particular for leading the organisation on behalf of his family. With the wider Canning family in attendance, it was a night’s racing and atmosphere that Daniel Canning would most certainly have enjoyed.