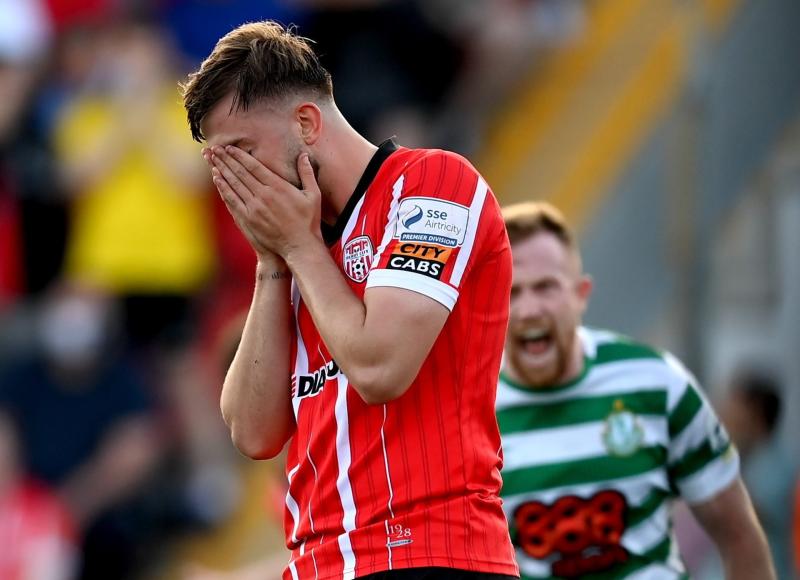 Ruaidhri Higgins has no concerns at all about Will Patching’s ability to bounce back from his penalty miss against Shamrock Rovers last week.

Derry City head to Drogheda United tonight hoping to stay on the heels of Dundalk and Shamrock Rovers, having taken just two points from their last two games against the top two in the Premier Division.

Pat Hoban’s late equaliser cost City two points at Oriel Park, while Patching’s first ever penalty miss for Derry proved decisive in the 0-0 against the champions at the Brandywell. Patching has been a star at Derry, scoring 15 goals and providing 12 assists in just 37 games under Ruaidhri Higgins and the manager therefore has no doubt the midfielder will only get stronger from the experience.

“Will has scored six out of seven penalties for us, so I don’t need to speak to Will about that at all,” he said.

“Ronaldo has missed penalties, Messi has missed penalties; the best players in the world miss penalties, so it’s part of football. Will is fine, he is a strong character, and if he had gone on and had a poor second half, then you could have said it might have affected him, but he actually got stronger as the game went on and became more influential as the game went on. He had obviously dealt with it, so we’re fine.”

Drogheda United may sit eighth in the Premier Division, but in recent months they have beaten both Rovers and Dundalk at Head in the Game Park, proving that they can be a problem to any team on their day. City themselves have won just once in three attempts against Kevin Doherty’s team this year.

“You look at Drogheda’s results against the top two this year,” Higgins continued. “Dundalk have lost three games this season and two of them have been against Drogheda.

"Drogheda have also beaten Rovers and they also drew in Tallaght recently as well, so they can definitely raise their levels and it shows what they are capable of so we need to be at our best going down here because it is a difficult place to go.”

City have paid dearly for missed opportunities in some big games this season, and have lost 9 points from winning positions so far. That inability to kill games off has cost them, as highlighted in last week’s game against the champions.

“We could easily have taken six points from the last two games, but it wasn’t to be,” Higgins agreed. “It’s a case of should-have would-have could-have. When we get chances, we have to be more clinical and ruthless and take responsibility. I would be a lot more concerned if we weren’t creating chances, that’s for sure.

“We drew 1-1 down in Drogheda earlier in the season, and we dominated that game, particularly in the second half when we were very good. We also drew 1-1 at home due to a dubious penalty against us, but in the first half of that we played really well.

“I’d be lying if I said it didn’t eat at me, but football moves fast and you have to get on with it. You have to look after the next game and that’s against Drogheda and we have to go down there and win, it’s as simple as that.”

Michael Duffy could be in line to make his first start since returning to the club, and Higgins acknowledged that his return to fitness has given everyone a lift.

“It will lift everyone, players, supporters and staff because when Mickey is in full flight, he’s a joy to watch,” he said.

“He’s a joy to coach and I’m sure he’s a joy to play with as well. It’s just a shame that we haven’t had that quality until now, but we have got him for a good number of games, so hopefully he can have an impact between now and the end of the season.”