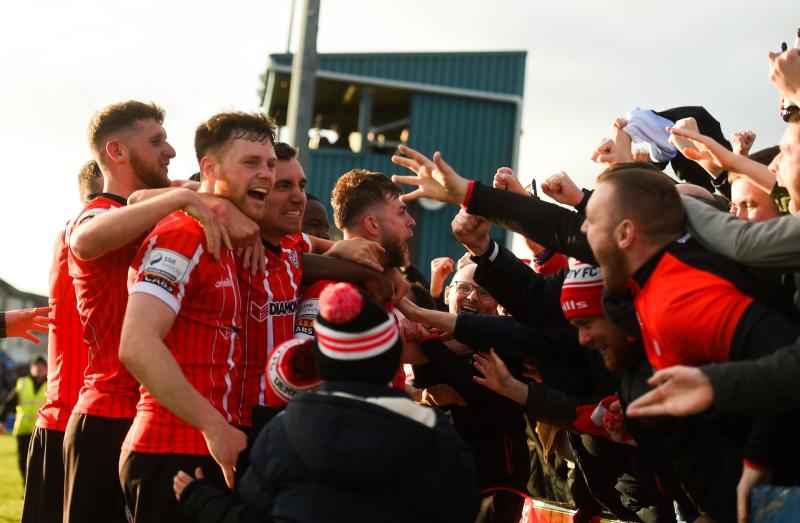 SAME AGAIN PLEASE…. Derry City players celebrate with the fans during the 2-1 victory at Finn Park back in April. Photo: Oliver McVeigh /Sportsfile

Derry City will have just one full day of recovery to prepare for Finn Harps on Sunday evening. Kick off 6pm.

Ruaidhri Higgins and his players are in action against Riga FC in tonight's Europa Conference League Qualifier, before flying back to Ireland tomorrow (Friday).

That leaves just Saturday available for a day of rest, recuperation and preparation ahead of the third Northwest derby game of the season. It is not an ideal situation by any means, but it is also an opportunity for the Candystripes as they continue to put pressure on Dundalk in an attempt to move back into second place in the Premier Division.

Higgins will likely stretch his squad the over the coming days, but big games demand big sacrifices and the Derry City boss is going to enjoy a very long and demanding weekend.

“If you are playing any decent team who gets into Europe, then that’s part of it. We’ll have to use Friday and Saturday, even though we’re travelling back Friday, but we’ll have to live like real professionals on those days and do everything we can to go there as fresh as possible and win because it’s a big game.

"It’s our game in hand and it’s also a really big game that we can’t take our eye off, but we’ve always focused game by game here and that won’t change.”

Harps, who were denied a win at the Brandywell by a last-gasp Eoin Toal header back in May, are desperate for a win themselves, as they continue to struggle towards the foot of the division.

At this point, it seems certain that Ollie Horgan’s team will feature in the relegation play-off this season, as they trail Drogheda United in ninth by a massive 13 points; however, with UCD just four points behind them, automatic relegation is still a concern for everyone in Ballybofey.

“It's a big game, it’s a derby and we always look forward to them,” he said.

“It’s going to be a tough game. They are never easy against Harps. We’ll focus on Thursday and then we’ll look forward to it. We’re in a good position in the league and I think we have a lot to shoot for still. The next four games if you break it down we can put ourselves in a brilliant position, so that will be our net focus.”

The next few weeks could well determine the remainder of the season for Derry with games against Dundalk and Shamrock Rovers approaching fast. Good results against the top two in the division would leave Higgins and his players well-placed to qualify for Europe once again.

The Candystripes have just recently come out of a slump in results which cost them a title challenge this season, but McEleney knows that a strong end to the season can do a lot for the players’ confidence going forward.

“Shamrock Rovers are obviously a grade above everybody and you can see that,” he admitted. “That shouldn’t be a surprise to anybody because they are well into their process and they are serial winners.

“Our aim as a club should be to compete with them, and I think we’ve done more than that to be honest. We obviously beat them here and they beat us down there, but I think over the two games, we’ve done really well against them.

"It’s a hard one to out your fingers on, because I think we’ve done quite well in a sense, but I still think we can do better.”