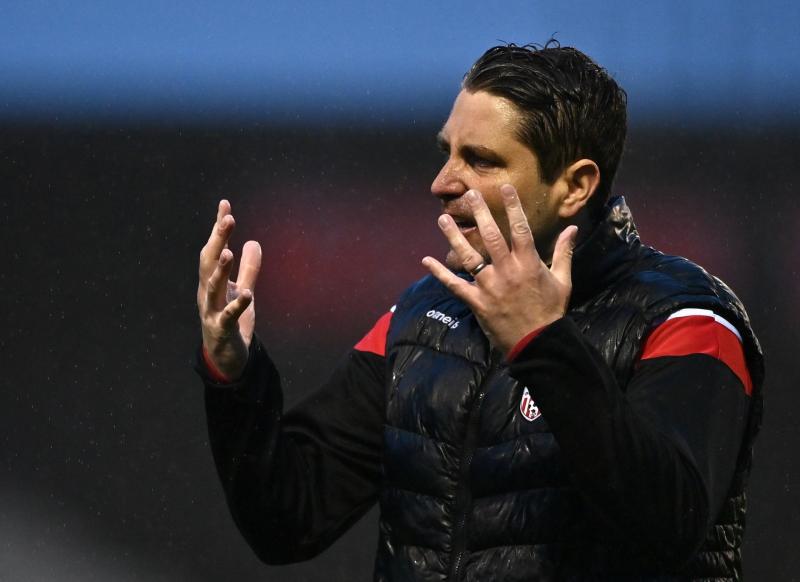 Ruaidhri Higgins fully believes his players can make history tonight by becoming the first ever League of Ireland team to overcome a 2-0 first leg deficit in Europe. Kick off 6pm.

The odds are stacked against the Candystripes after last week’s 2-0 defeat to Riga FC at the Brandywell, which leaves the Latvian side in control ahead of this evening’s Europa Conference League Qualifying tie.

But Higgins is convinced his team can produce a much better display away from home, and put themselves in the history books in the process. The closest an Irish team has come to overturning a 2-0 defeat was an Intertoto Cup tie between St. Patrick’s Athletic and Belgian side Genk back in 2002. Pat’s lost the first leg 2-0 away, before winning 3-1 at home, only to go out on away goals.

Meanwhile, City themselves have faced similar circumstances, losing 2-0 at home to Dinamo Minsk, before winning the second leg 2-1 back in 2018.

It is not beyond the realms of possibility, and Higgins agrees.

“It would be historic but it’s something I truly believe the players are capable of,” he said. “We need them all to come to the party and need them all to embrace the challenge ahead of ourselves. Let’s see if we can do something out of the ordinary.

“We have to park last week’s result, learn from it and go over there and play with freedom and express ourselves. It might suit is going out there because no-one gives us a prayer now to go through.

“It will be extremely interesting to see how they would react if we got the first goal because doubt will start creeping into their minds. It doesn’t have to be scored in the first minute, but as long as we get the first goal then it’s game on. That’s the task and I really believe that we can go and do something that no-one expects us to do.”

If City are to produce something remarkable, they will certainly need luck on their side. That luck was entirely absent last week, as the big moments in the game all went against the Candystripes, leaving them in this unenviable position.

“It was obviously disappointing,” Higgins agreed. “The scoreline was disappointing, and to concede just before half time was a blow because I didn’t think there was a lot in the first half.

"It was scrappy, the pitch was dry and sticky and it didn’t really allow for a free-flowing game. Matty (Smith) was then sent off in a moment where I felt we were growing into it and might get an equaliser and then they scored straight after which was another kick in the teeth.

“It was really, really important that we didn’t concede a third and that gives us a wee glimmer of hope.”

Higgins has pointed out his team’s very impressive away record this season, winning almost twice as many games on the road as they have at the Brandywell. The City boss also knows what it takes to win on big European occasions, having done so himself as a player with Derry and as a coach with Dundalk.

“I believe that we can go over here and produce something special,” he maintained. “I know talk is cheap, and people will say ‘Of course he will say that’, but I truly believe it. I believe in the individual players we have and I believe in the characters in the dressing room.

“We go over there and no-one is expecting us to do anything so we can take the shackles off and play with expression and freedom and see where it goes. We will try and get a hold of the ball better than we did here. The pitch over there is a really nice pitch so it will suit us and hopefully we can do the unexpected.”