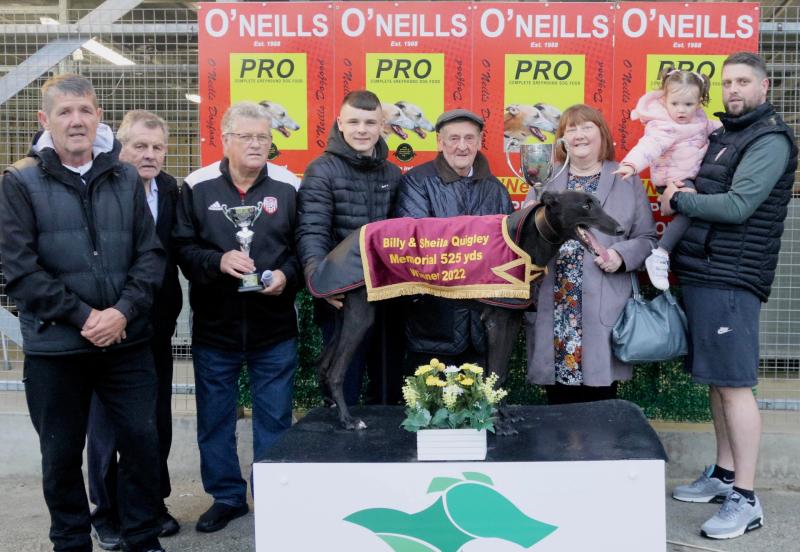 The crowds flocked to the Brandywell on Monday evening to support one of the most prestigious race meetings in the calendar.

The Track Lotto Memorial Gala Night has been an annual event at Brandywell for many years and sponsoring competitions in honour of dearly departed loved ones has been a wonderful way to remember them and their passion for the sport.

Very Mediocre (Jaytee Jet x Funny Pippa, Nov ’20) was evenly away from trap 6 for Michael McLaughlin. Millridge Ivy from trap 3 and Ginger Sonic from trap 1 were also battling for the lead on the run to the first bend however Mediocre was anything but that when she determinedly took the lead on the crown of the bend and despite getting her back legs clipped from behind she ran on strongly to win in 17.07 by 3.75 lengths from Smokey Louie with Millridge Ivy a further 0.5 lengths back in third.

This was a first career success for Very Mediocre in only her fourth career start and what a great night to lose her maiden tag. 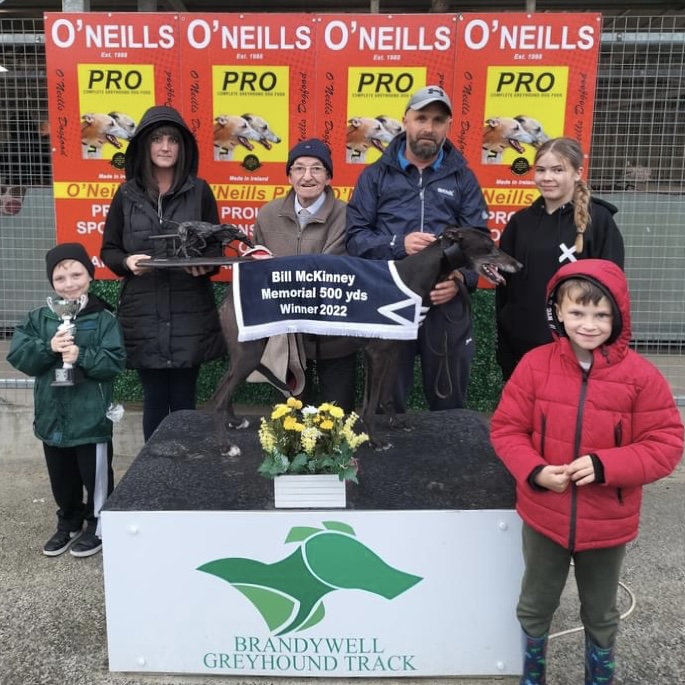 The Bill Mc Kinney Memorial 500 Final was won by PEACE in 28.02. From left, in front, Caolan McKinney, back row from left, Caoimhe McKinney, daughter of the late Bill who made the presentation to winning owner Willie Hegarty, Frank Hegarty, Ella & Josh McKinney.

It was Galsgone (Ballymac Eske x Fine Jewel, Mar ’20) from trap 3 for Kevin O’Kane that overcame crowding at several places during the race to pass the early leader, Snipe Drum, on the home straight. Galsgone recorded 28.33 when winning by 3.5 lengths from Snipe Drum with Generous Rascal taking third place, a further 3 lengths away.

This was a third consecutive win for Galsgone over the course and distance which is all the more impressive since he only had his first career success in May when he landed the Doug Shrimpton MRCVS Memorial 500.

Peace (Droopys Cain x Fridays Tess, Jun ’19) was a worthy winner of the Bill McKinney Memorial 500 Final for Willie Hegarty. This competition carried a £1,000 first prize sponsored by the McKinney family and Track Lotto. The presentation jacket was sponsored by Charles Coyle. It has taken a lot of patience and dedicated training to get this very lightly raced three year old fit and ready for the final.

It was only the fifth race of her career but as the field approached the first bend in almost a line, she was gutsy and accelerated into the lead from her wide trap 6 berth. Whilst Boherna Vic and Ten By Thursday chased her home, they were still 2.5 and 3.25 lengths respectively behind the winner who stopped the clock in 28.02. 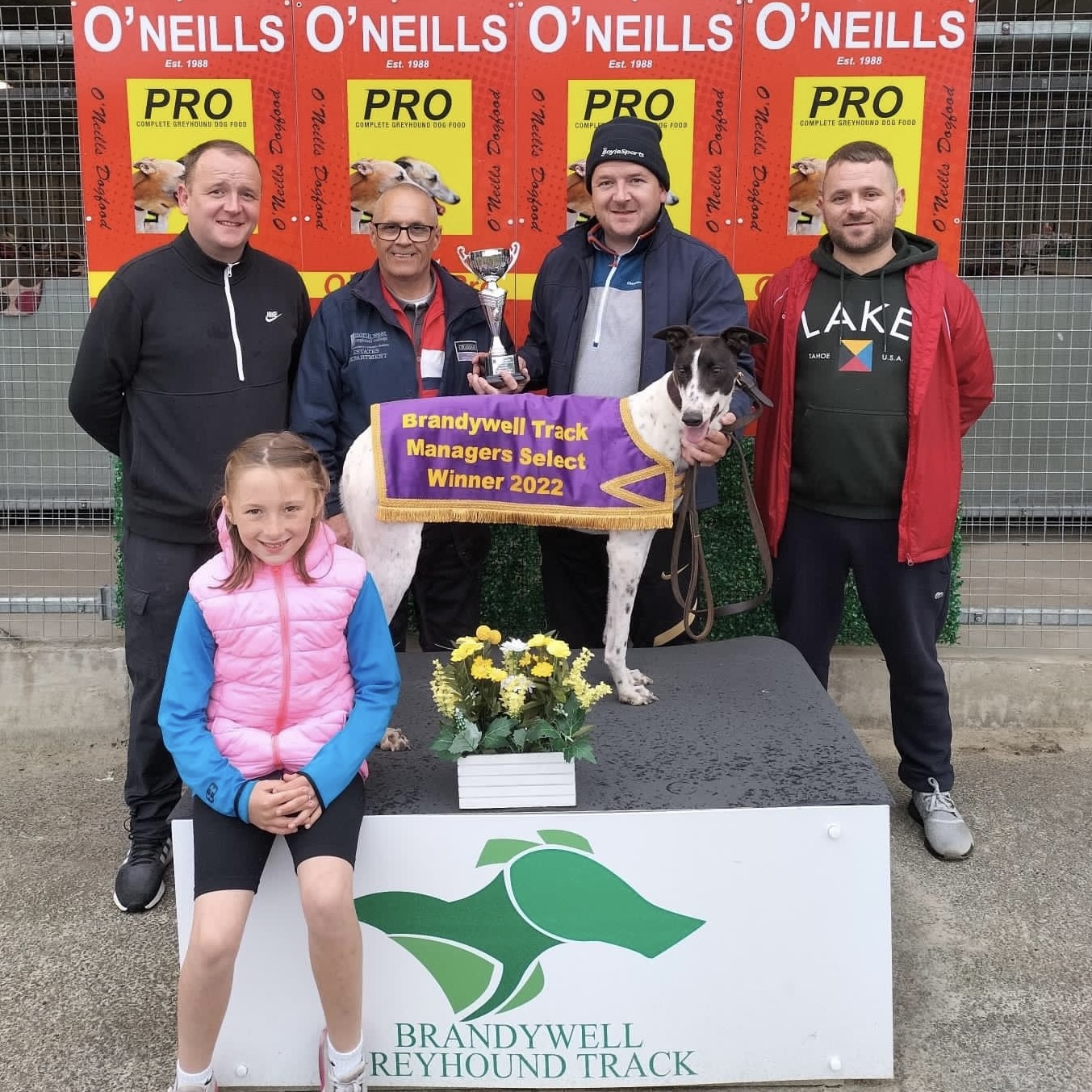 Brendan Duffy’s Brakes Are Off (Droopys Sydney x Lady Midnight, Aug ’20) has taken Brandywell by storm since he arrived to contest the Billy & Sheila Quigley Memorial 525. He has won each round of the competition and once again his early pace took him to the front going into the first bend despite being crowded slightly on the run up.

He built up a significant lead down the back straight which was just enough to hold off the strong challenge from Footfield George by a length with Gotheratlast finishing third a further 4 lengths away.

This pup has been very consistent and recorded a fast 28.92 to land the £1000 first prize sponsored by the Quigley family and Track Lotto. The presentation jacket was sponsored by Liam Farrell.

'We will enjoy it every step of the way'

The Benny Barrett Memorial Sprint was the last of the competitions to be decided on the night and it carried a £1,000 first prize sponsored by Pat Barrett and Track Lotto. The jacket was sponsored by Just Vape Strabane & Omagh.

Twentyoneten (Ballymac Best x Some Ginger, Aug ’20) was slow away from traps but showed great pace going into the first bend. Generous Daisy and Summer Swirl were the early leaders but the pair lost their advantage as they moved wide on the bend.

Twentyoneten swooped up their inside and ran on strongly up the home straight to win in 16.80 for Thomas Light.

Generous Daisy was a 1.5 lengths away in second place and Palmgrove Flyer was 0.75 lengths behind in third. It was a very pleasing success for Thomas and his friends as he is a son of their own brood Some Ginger who also won at the Brandywell over course and distance.

Open races were the feature of the remaining races on the programme and we saw some top quality performances from the canine athletes.

The Tasty Reel Restaurant Open 700 was sponsored by Matthew Nixon and carried a £400 first prize. The presentation jacket was sponsored by Aidan McAllister, Greyhound Transporter. It was a race of changing fortunes with the type of thrilling finish that make these distance events so popular amongst racing enthusiasts.

Flying Honours (Ballymac Eske x Designer, Apr ’20) a great grandson of Flying Winner certainly had the right pedigree for this event, but he went into the event as a maiden with only 7 career starts on his card. 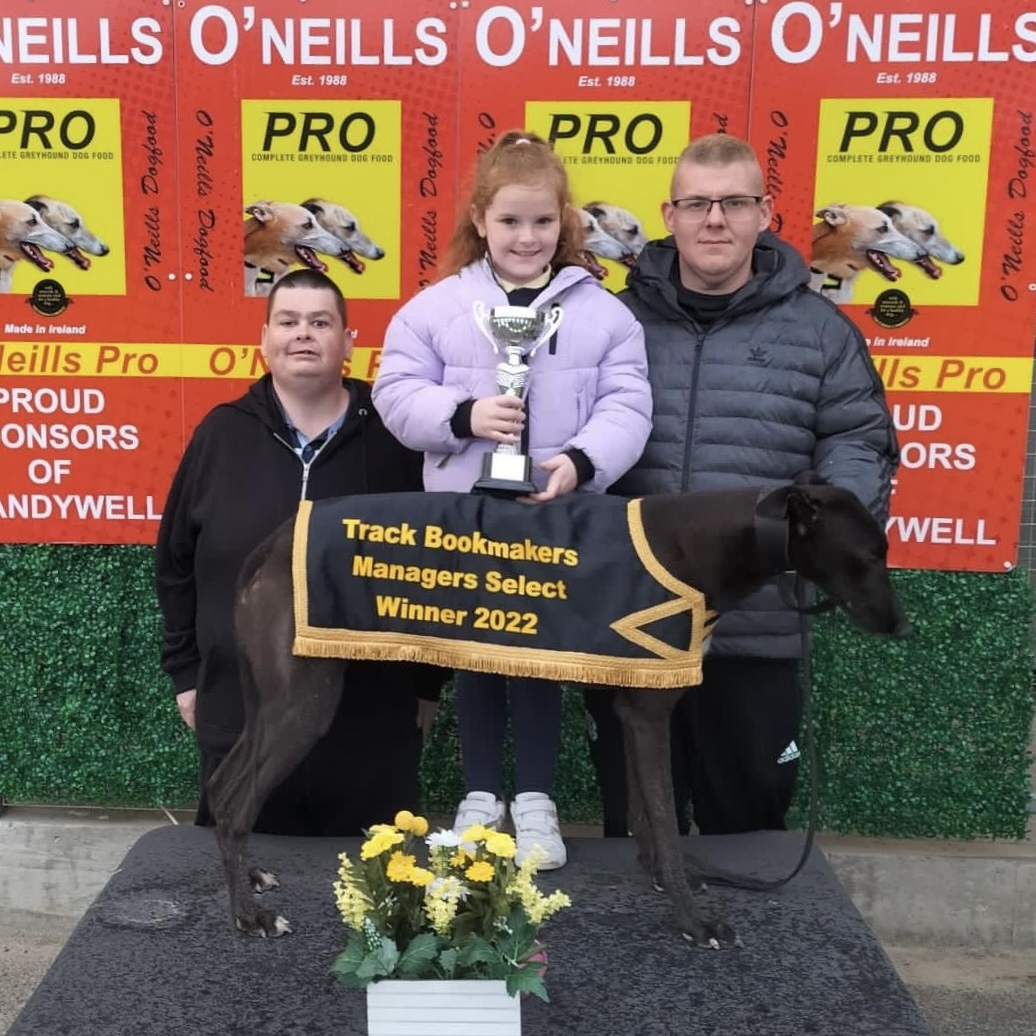 However, Flying Honours packed a turbo charged finish and he flew up the home straight to win by a neck in 39.88 for Nigel McGarry and land his first career success. Fayes The Boss was gallant in defeat and Cornamaddylegend was only 2.5 lengths behind in third. Flying Honours is a very exciting marathon dog that has emerged on the scene and since Nigel is no stranger to travelling hundreds of miles with his greyhounds, we can expect to see this lad take part in marathon events around Ireland. He is one to watch for when the Shelbourne Marathon starts in December.

Manuone (Droopys Sydney x Shirocco Star, Sep ’19) for Tony Maxwell was a most impressive winner of the Rocking Chair Bar Open 500 sponsored by Brendan Duffy with a winner’s prize of £400. The jacket was sponsored by Pius McIntyre.

Manuone made great use of his trap 6 draw to take an early lead going into the first bend. He drew 9 lengths clear on the way to a sizzling 27.40 victory ahead of Choctaw Koi with Sword Of Honour 0.75 lengths away in third. Manuone is improving with age and race experience and this was a top quality performance which brought his career tally to 5 wins from 15 races.

The Pauls Butchers Open Sprint brought racing to a close with a £400 first prize sponsored by Paul Ellis and a jacket sponsored by Just Vape Strabane & Omagh. Millridge Toby (Droopys Jet x Millridge Ozie, Sept ’19) for Mark Canning was having his first race at Brandywell after completing a hatrick of top grade sprint wins in Tralee.

He was highly impressive as his early pace took him a couple of lengths clear of the field going into the first bend and he ran on strongly to win in a very fast 16.47 by 3.25 lengths from Burrow Panther with Pennylane Syd 3.5 lengths back in third.

By all accounts it was a great night’s racing with plenty of new memories created and old memories reminisced over. Thank you to everyone who played a part in the success of this great event and special thanks to the Track Lotto Team and all the sponsors.