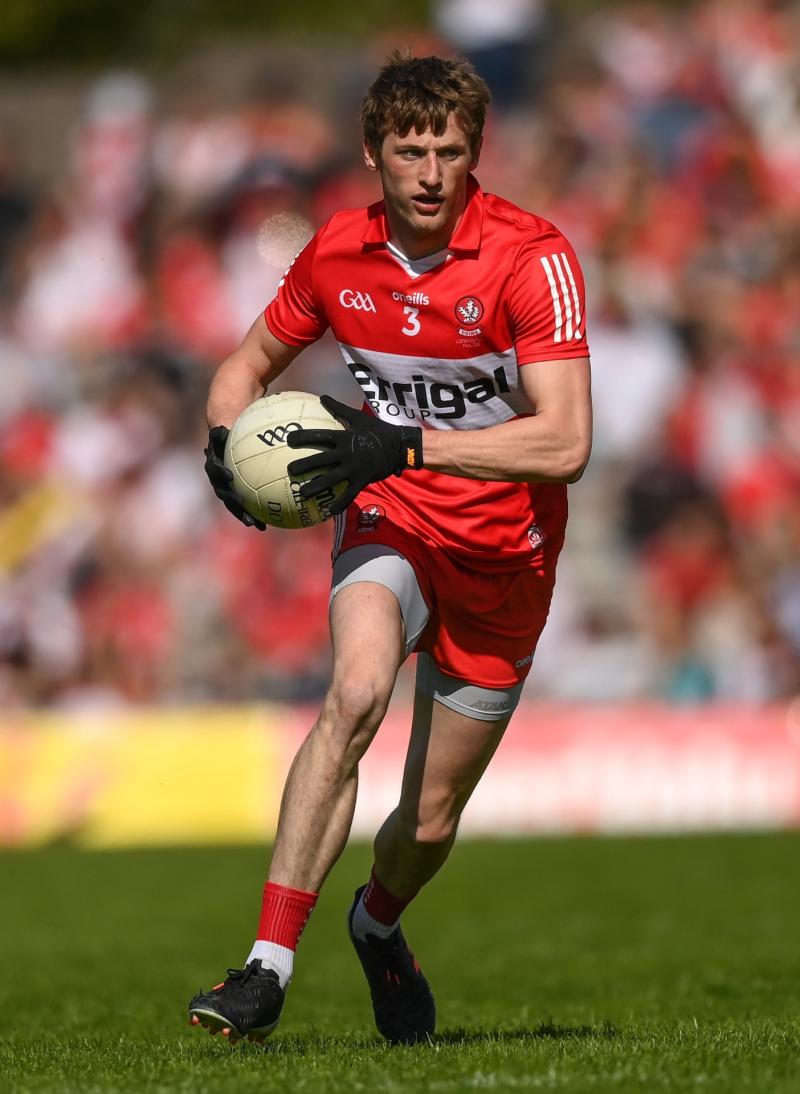 When the Derry bandwagon pulled out of Ennis back in March, Rory Gallagher’s men had eight League points from four outings.

Goals from Benny Heron and Gareth McKinless shot them to a comfortable win over Saturday’s opponents Clare.

The Oakleafers were one win away from having a foot in Division One.

Their straightforward path soon meandered into one littered with landmines and hurdles. First there was the Roscommon battle in Dr Hyde Park that ended level, with Shane McGuigan controversially sent off on a second booking before having the chance to convery what would’ve been the winning free.

His one-game ban was the beginning of a week from hell that saw Galway hammer them out the gate in the first half of the most eagerly awaited game of the year.

Looking on from the outside, Derry were at a crossroads. The fading flame of promotion was flickering out. It was a quiet squad that trudged down the Owenbeg corridor.

“That was a reflection of where were at on the day, but not an overall reflect of where we were at overall,” Rory Gallagher later stated during Derry’s Championship adventure.

To add salt to the wounds, Ciaran McFaul and Gareth McKinless were both sent off. In the five weeks before the Championship, McFaul was gone from the squad and is current embarking on a summer of football in America.

With days to go to the Tyrone game, there were unfounded chatter of McKinless planning a trip over the water.

He wasn’t and the way McKinless imposed himself on Tyrone on championship Sunday was a signal of intent on the road Derry were laying out for themselves, all the way to Clones and a first Ulster title in 24 years.

The legacy of Derry’s summer is energy, hunger and Rory Gallagher hammering the hammer.

You have men like Paudi McGrogan epitomising Derry’s steady influence on games. Paul Cassidy ploughed through the workload few ever notice. Benny Heron has rolled back the years, looking sharp and working harder than ever.

It’s a summer of Chrissy McKaigue putting key men in his pocket, of Conor Glass hunting down opposition attacks and Brendan Rogers taking his game to a whole new level.

Derry fans are daring to dream of three Croke Park outings in a summer just a mere four years after playing in Division Four.

It’s a fairy tale and the four-week break will be the perfect place for Derry’s preparations. The Anglo Celt Cup needed celebrated. A day or two of partying was expected, but by midweek the dirty diesel was ran out of the system, leaving three weeks to get their focus on the next journey.

The 400 metre runs will have ramped up the fitness and sharpened the focus.

A dozen of the Derry starting team from the win over Clare are expected to start on Saturday, a similar figure Colm Collins handed starts to in their win over Roscommon.

It was another lesson in digging deep. Keelan Sexton’s penalty was one thing, but his monster free to level matters was real pressure.

They allowed Roscommon goalkeeper Colm Lavin to poke his kick-outs short and they took their chances at stripping the ball off them. Pearse Lillis sat deep, almost as a second centre back to clog the channel in front of Enda Smith.

You’d expect Shane McGuigan to get the same treatment, but it robs Clare of another scoring option up top.

Chrissy McKaigue will almost certainly pair off on Sexton, with Aaron Griffin needing to occupy whoever Derry put on him – Conor McCluskey or Brendan Rogers.

This is where Clare have a decision to make. With Rogers’ outstanding role in the Ulster final, would it tempt Colm Collins to start David Tubridy from the off and play a conventional front six, with rotation, to occupy Derry defensively.

Jamie Mallon, Emmett McMahon and Lillis will provide the extra links around Eoin Cleary who will need marked. After blotting out Conor McKenna, Conor McManus and Michael Langan so far, Paudi McGrogan will surely be the man to pick up Cleary. McManus’ point was all he conceded from play.

Derry have the defenders to clamp down key influences and have plenty about them to ask questions of Clare’s defence.
If Derry can match ambition with caution, they are in a perfect spot to book a first semi-final berth since 2004.