'Burkey' living on through Bronagh and the twins

Local mum on living with grief after unimaginable tragedy 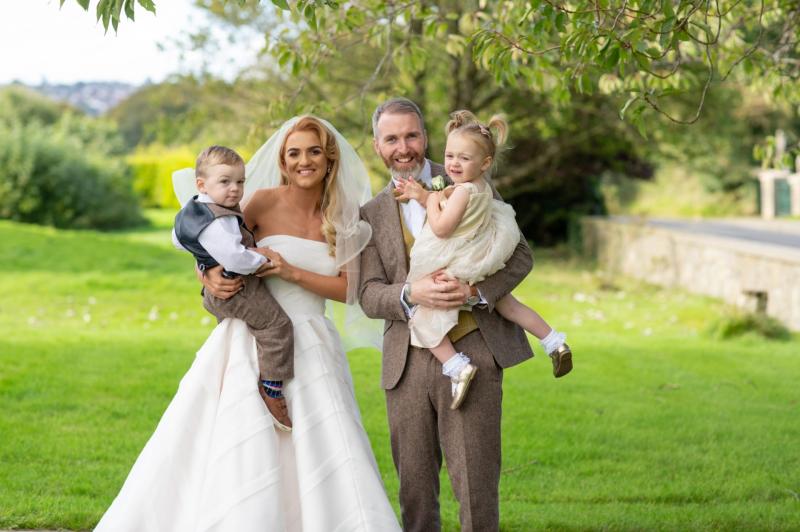 Bronagh and Thomas Burke on their wedding day with twins Adam and Aoife.

‘He’ll always be Burkey to me’.

Bronagh Burke sits in a small room in Trojans’ Oakland Park base, looking out the window as her six-year-old son Adam watches the Thomas Burke Cup quarter-final between Rosemount and Creggan Swifts. Adam’s twin sister Aoife is somewhere close by, keeping herself busy.

The tournament, now in its second year, is held in honour of their daddy, who died just over two years ago at the young age of 29, after suddenly collapsing at his home.

A former footballer with Derry City, Institute, Limavady United and Ballymena United, ‘Burkey’ was also a youth coach at Trojans, and he was held in such high regard that his sudden death on April 23, 2020 devastated everyone at the club and those who knew him throughout the community.

Married just a few years, Thomas and Bronagh had been blessed with twins, who were just three years old at the time. His death came a month into the global covid-19 pandemic and meant that when she perhaps needed it the most, Bronagh could not find the support she and her children needed. Lockdown combined with her devastating grief made it an unimaginable time for Bronagh, who was still in her twenties herself.

But as she sips on a cup of tea, staring out the window, lost in memory, she looks back on those challenges as a blessing of sorts, as they forced her to deal with that grief head on.

“The second of everything is tougher than the first,” she admits. “Last year to me was to launch the competition, just to get it out there and honour Burkey’s name, but it’s more meaningful to me this year. There’s more of a push on it this year and there’s a bigger response to it. It’s tough in ways, but at the same time it’s just amazing that he’s getting acknowledged two years on.

It is now just over two years since Thomas’ death, and Bronagh has faced every day bravely. Social media has helped her massively; be it ‘Wee Burkes­_Journey’ on Instagram, or her podcast ‘Memory of Me’ on YouTube, Bronagh has not only helped herself, but helped countless others manage their pain, brought on not just by grief but other forms of trauma such as domestic abuse, miscarriage and a marriage ending.

Her last podcast was filmed just four weeks ago, with views well into the thousands for that episode alone. It has been a surprising turn of events for Bronagh, who has come to realise that talking about her grief has helped her and so many others.

“We were at the height of the global pandemic when we lost Burkey,” she explains. “It was really, really tough and isolating and being on your own, as lonely as I am, I was a lot lonelier because of covid, because I couldn’t see my family and my friends and stuff like that. The only way I approached things was by reaching out to people on social media, and just said how I was truly feeling each day and how much I missed him.

“I think that’s where it all evolved for me – I was just so open and honest about our love. The Covid pandemic was horrendous when it was happening, but at the same time too it was kind of like a blessing to me because I had more time to think and time to process things that I would never have got the chance to do had we not been restricted.”

“It was about growth for me to be honest with you. It was part of healing to see you know that you’re not alone. You’re not alone in the thoughts and feelings that you have and in some dark moments that you have throughout grief. These are all normal and everybody in ways will be feeling what we all feel when we go through grief. That was the main purpose for me to do the podcast; yes, it was growth, but it was a huge part of healing for me, to know that you aren’t alone, that it’s normal.” 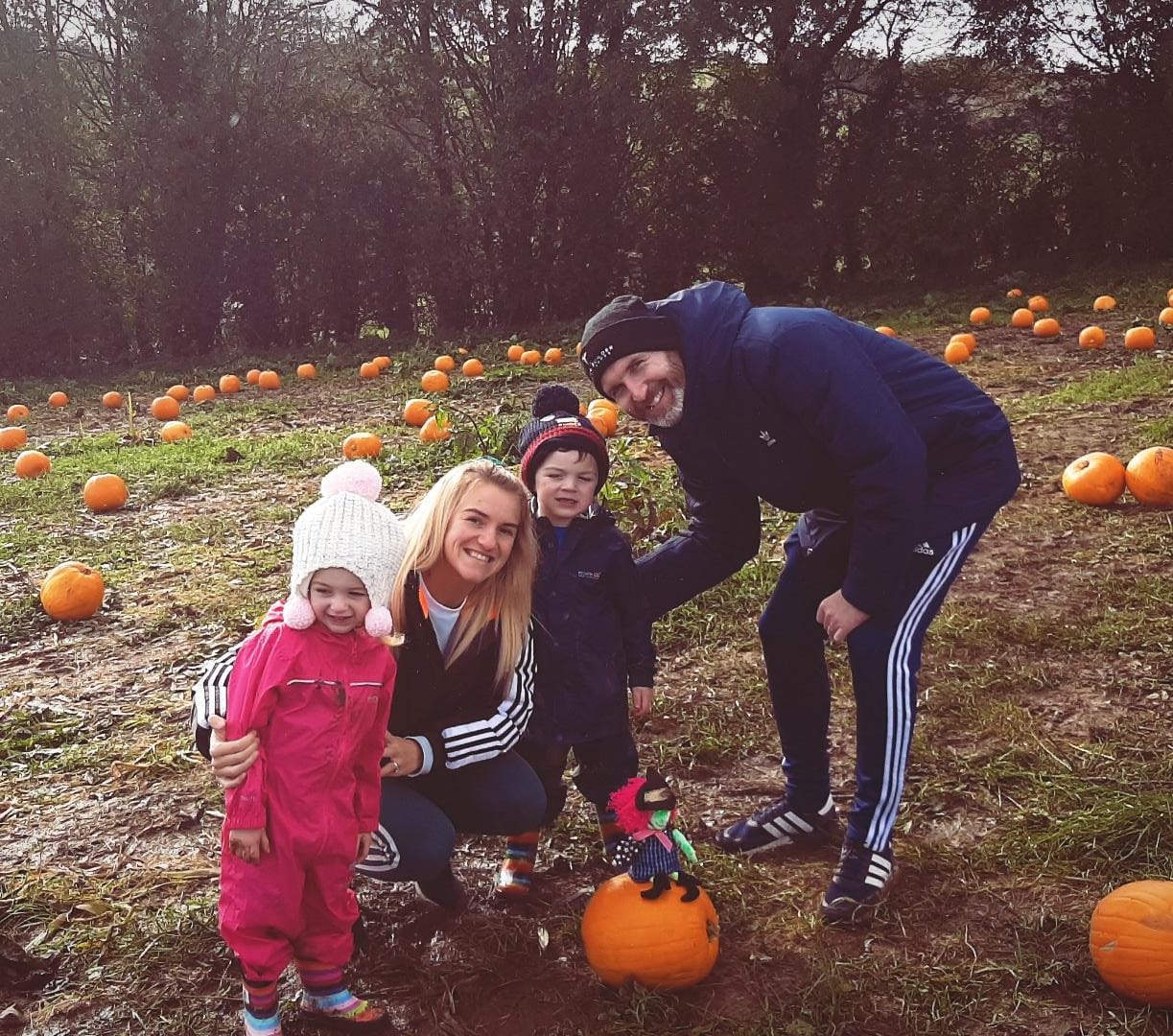 Bronagh does not shy away from talking about the love she and Thomas shared, and she laughs when asked to recall the story of how they met, back when they were star-eyed teenagers.

“We met when we were both 16. Burkey at the time was playing for Derry City and I was all lured. I thought ‘this is amazing’, and thought I was going to become this big WAG,” she smiles. “We met through a mutual friend and it really just kicked off from there and we with each other for 13 years.

“Burkey was such a soft soul. He never had this hard persona at all about him; he was just the kindest, softest soul you could ever meet and he was so, so gentle; everybody just loved and adored him; I think because he was is honest and open, what you seen was what you got from him. He was just such a caring person. He really, really was.”

Be it the Thomas Burke Perpetual Cup at Trojans or the podcast or the stories and pictures from his life, Adam and Aoife will always have their daddy close by. His legacy will live on in them Bronagh explains.

“Burkey was there for the first three and a half years of their lives,” she continues. “It was a cultural shock for both of us because they were our first children and they were twins. He was such an amazing, powerful father. It’s these moments now, I’m sitting watching Adam watching the match and it’s these moments where you feel he would love his daddy to be here right now instead of me taking him on the sidelines.

“They do remember him and he’s spoken about constantly throughout our house and my mammy’s house, and with everyone who loves and adores Burkey. Burkey left such an impact when he left and the kids will never forget him because he’s so talked about each and every day. Even small moments when I would say ‘Me and your daddy did this’ or even seeing a picture of him, but they never forget him.”

One habit Bronagh has certainly not lost is calling him ‘Burkey, never ‘Thomas’.

“Always,” she laughs. “When I was standing at the top of the aisle when we got married, that was probably the only time I called him Thomas and then I switched back right away to Burkey. I’ve not known him as anything different so I’m not going to call him anything else. The majority of my friends would just call me ‘B’, so he would just call me that, but I would always have called him Burkey.”

“We were very lucky that we met each other when we were only 16. Burkey was my first boyfriend. We did have something really, really special and it’s just heartbreaking, the most shattering end to it all. You just have to get up and get on with it every day and I just have to, for our children.” 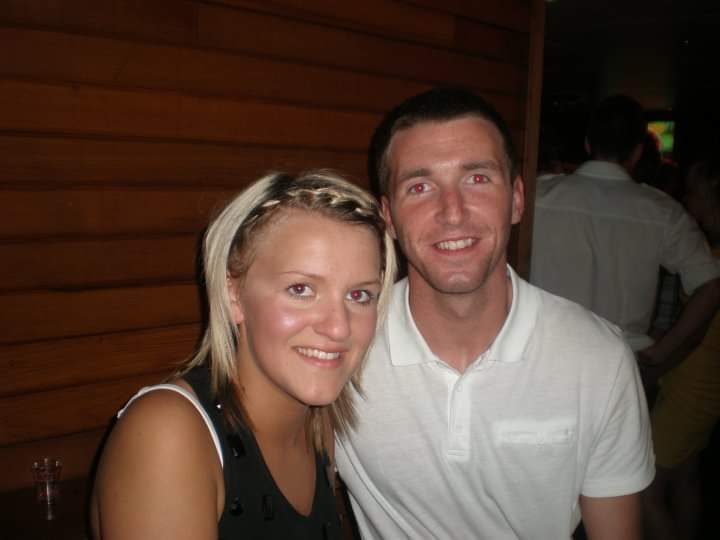 It has been a time of great trauma and change for Bronagh, who also lost her own father seven years ago. Taking the brave steps to go public with her pain has undoubtedly been a help, and in the day-to-day things of a busy mother she knows she always has the support of her own family as well as Thomas’ parents Linda and Thomas, who remain very close to her and the kids.

“It’s okay to miss him, to laugh at a joke he said, it’s okay to smile at a picture of him, all these feelings are alright,” she says.

“I lost my father seven years ago and I can hand on heart say that it was five years in where I took a moment and I just knew that he was never going to come back again. For five years it was such a blur for me. Everybody’s grief is so personal to themselves and some people grieve in all different types of ways, the good, the bad and the ugly, but you have to feel them feelings to know that it’s alright.

“We are only human at the end of the day. Missing someone is probably the hardest thing that you will ever overcome in your life. Especially in my situation; myself, Adam and Aoife. Ours was traumatic grief, on top of grief itself, which is even harder for us at times but we do get on with it. We get our strength every day from Burkey.”