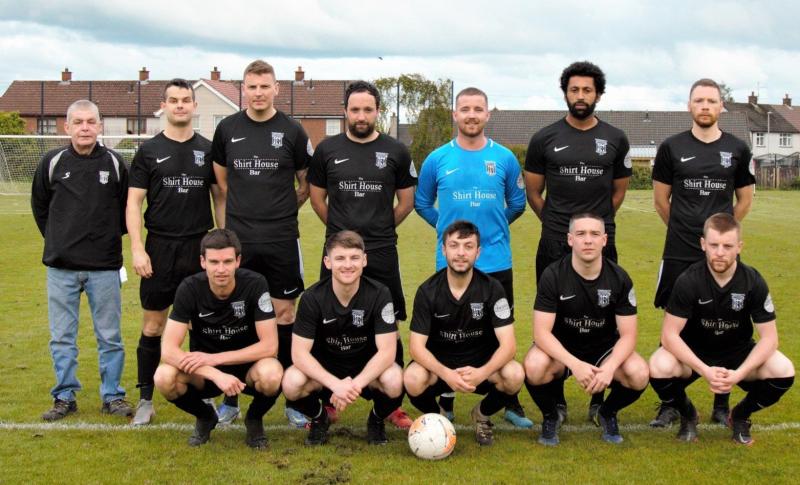 The Rosemount team which defeated Creggan Swifts to make it to the semi-finals of this year's Thomas Burke Memorial Cup. Picture courtesy of Gerry O'Donnell.

Rosemount will meet either Cockhill Celtic or Churchill in the semi-finals of this year's Thomas Burke Perpetual Cup, after another entertaining game at Oakland Park on Tuesday evening.

A strong Rosemount side, one of the favourites to win this year's competition, came from behind to beat Creggan in a game which was end to end and could have gone either way. Creggan were right in the game until two goals in the space of just a few minutes early in the second half took the game away from them.

A good crowd was there to take in what many hoped would be an entertaining game between two good sides, and they weren't disappointed.

PJ Ward set Creggan on their way early on when he converted from the penalty spot, but their lead didn't last long at all, as Aaron Rogan, becoming something of a specialist in free kicks, equalised with a brilliant effort from 20 yards. Creggan goalkeeper Chris Mulcahy got a hand to it, but couldn't keep it out and the game was level at 1-1.

The game stayed that way until half time, with both teams missing chances at either end, but events took a huge swing in Rosemount's favour with two quick-fire goals early in the second half.

The first came when Mo McElhinney sent over a cross and Rogan was there to add his second of the game with a brilliant diving header to put his team in front for the first time in the game.

With Creggan still finding their feet after that setback, Rosemount struck again to make it 3-1, this time McElhinney tapping in at the back post after a good cross from substitute Paul Simon Tracey.

Creggan did their best to get back into the game, but the game was over for them when Rosemount were awarded a penalty and Mark Healey produced a Panenka penalty right down the middle to make it 4-1. That left Creggan with too much to so, but they did get some respect back on the score line when substitute Emmett Coyle saw his shot deflected in to make it 4-2.

The competition continues tomorrow evening with hosts Trojans taking on Lisahally, hoping to make the last four of a tournament they would love to win in honour of their former player 'Burkey'.