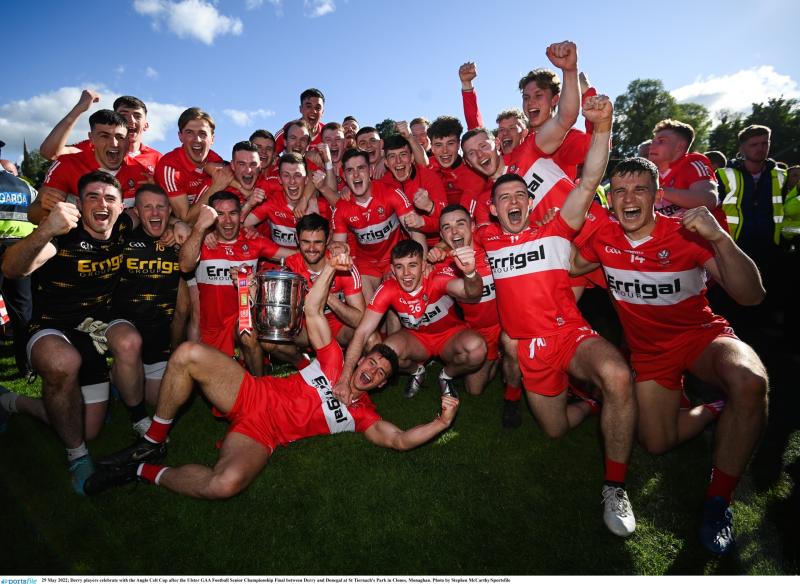 Rory Gallagher insists there is still more to come from Derry after leading his team to their first Ulster title since 1998 in dramatic circumstances at Clones today.

The Derry manager watched his team did deep to pull out a 1-16, 1-14 victory after extra time in the county's first Ulster final since 2011.

Thousands of Derry fans invade the pitch at full time to begin the celebrations and Gallagher, who has lost Ulster finals in the past, now knows what it feels like to come out the other end.

“I've lost against Monaghan, I've lost against Donegal, and those were very tough experiences,” he admitted. “They are irrelevant today but in a lot of ways you make your peace when you lose and you're part of a group. Donegal will do that; they'll not be happy with some things, we won't be happy with some things, but it's unbelievable elation when you come out the right side of a battle like that.”

Having now won Ulster, Gallagher was inevitably going to be asked just how far this Derry team can now go.

“We want to fulfil our potential, and I thought that fulfilling that potential meant that we were capable of winning an Ulster title,” he explained.

“You're playing Donegal or Tyrone and there's nothing between any of us; you've got to produce it on the day and I thought we were the better team. We want to keep improving. We're fairly new on the block with covid and one thing and another. We've really only knuckled down with this group of players for 14 or 15 months or something like that and we just want to keep going and that's what we're going to do. We'll enjoy this today and tomorrow then we'll move on.”

That sentiment was backed up by Man of the Match Brendan Rogers, whose three points helped Derry to a memorable victory.

“It's a very, very special moment,” he agreed. “You always have ambitions when you're young fella to win something with your county and in an atmosphere and a venue like Clones on Ulster final day, it makes it special when you win it. I'm just delighted to be on the end of a very, very tough game.

“It was very, very difficult and the way we set up, we try to work for each other in all aspects. A lot of the forwards had to do a lot of defending and Shane and Niall Toner caught a lot of balls at the end. I could only do my bit and try and help them on the front foot because it's not easy getting up and down the pitch like that. I was very fortunate I was on the end of a coupe, of cores, but the team performance was way and beyond everything else.”

“He's been phenomena,” he said. “There was a bit of something missing in Derry for a long time and I think Rory coming in brought us all together and got us playing as a team. It's hard to say it's just one thing but he's produced a lot of goods for Derry and tried to get us to a better place and he's done a phenomenal job so far. We always feel we have more to go and we don't want to stop here, we want to keep building and progressing as a team.”