We've done it! Derry down Donegal to lift Ulster title! 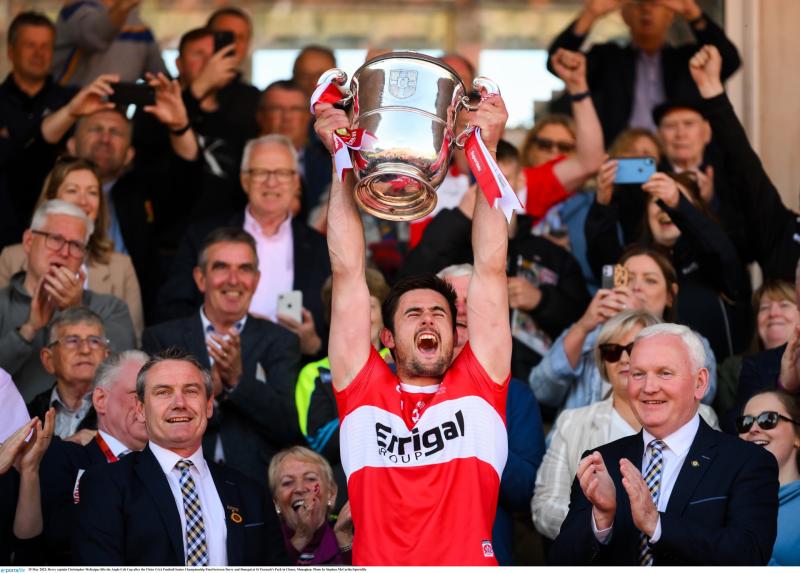 Derry won their first Ulster Championship in 24 years after a phenomenal effort against Donegal in Clones.

Man of the Match Brendan Rogers and Conor Glass scored points in the second half of extra time to give Donegal too much to do in the time remaining at the end of a nail-biting game in Clones.

It is history for Rory Gallagher who has led Derry through a remarkable campaign, and having come so far in such a short time, who knows where this journey can end.

The game exploded into life on 11 minutes when Derry found the net to get off the mark; Niall Toner was found in behind in space and he kept his cool to find Niall Loughlin, who sidestepped Shaun Patton before firing the ball into the net to the delight of the everyone in red.

The goal kicked Donegal into action and they responded with their first score from Shane O’Donnell, but Derry were straight down the other end with Paul Cassidy scoring a monster score from distance to make it 1-01, 0-1 on 13 minutes.

It just wasn’t going well for Murphy at this stage as he sent a second ’45 wide of target, making it zero points from three efforts for the Donegal captain.

Derry were building in confidence and Shea Downey exchanged passes with Benny Heron before scoring his first point of the game before Jamie Brennan sent another one wide for Donegal at the other end.

Shane McGuigan then scored from a free to send his team 1-3, 0-1 clear at the midway point of a first half which was going exactly the way the Oakleafers wanted.

Peader Mogan began to come to the fore for Donegal with two points either side of a score from Loughlin and Michael Murphy finally got off the mark with his first score to make it 1-4, 0-4 with half time slowly approaching.

But Derry responded well again and Loughlin, playing superbly, scored a free before Brendan Rogers scored the best point of the game to that point, standing up Murphy before scoring brilliantly on his trusted right foot to restore the five-point gap.

Mogan, Donegal’s best performer of the first half, added his third moments before a Niall Toner foul on Odhran McFadden Ferry gave Patrick McBrearty the chance to put a goal between the sides once again.

Right at the end of the half, there was a heart-stopping moment for Derry fans when goalkeeper Odhran Lynch spilled an effort from Caolan Ward, right into the path of Michael Langan, who lashed the ball wide of the net under pressure. It was the last action of an absorbing first half, and a real let off for Lynch and Derry.

There was a disastrous start to the second half for Derry as they conceded a goal within seconds of the restart. It was another uncomfortable moment for goalkeeper Lynch who couldn’t hold on to a shit from Langan, and McFadden Ferry was there to punish the goalkeeper, hooking the rebound into the net to level the game at 1-6 apiece.

Derry needed something and it came from another class score from Rogers, but within minutes they were chasing the game. Jason McGee levelled again at the other end and when Ryan McHugh hooked a point over, Derry fell behind for the first time this year in the Ulster Championship before Shane O’Donnell made it a two-point game as the game turned against Derry dramatically with 10 minutes not yet played in the second period.

Shane McGuigan produced a big kick to score from a free to get Derry back into it and Conor Doherty then brought Derry level after a good period of Derry pressure, a brilliant response from Rory Gallagher’s team.

A Patrick McBrearty free then put Donegal back in front on 52 minutes but Shane McGuigan produced an outstanding score for a hard-working and patient Derry to bring it level again for the third time.

A sensational long-range effort from Michael Murphy put Donegal back in front and Eoghan Ban Gallagher then set up Jason McGee to put some daylight between the sides with just 10 minutes to go.

A Shane McGuigan free followed before Donegal’s Stephen McMenamin escaped a black card, getting a yellow when bringing the Derry forward down when he was through on goal. Nevertheless, McGuigan scored the resultant free to level the game at 1-12 apiece with less than five minutes remaining.

Cassidy and the Glass in injury time both had opportunities to win it for Derry, but they both missed the target and the game went to extra time.

Aaron Doherty took the mark to score for Donegal early in extra time, but they couldn’t shrug Derry off and Emmet Bradley scored a sensational effort from 0 yards out to level yet again.

Shaun Patton produced a remarkable save to deny Benny Heron a goal in the second period of extra time, but Derry still took the lead with Shane McGuigan scoring from a free, the first time the Oakleafers led since the first half.

Brendan Rogers then stroked the ball brilliantly between the posts with just three minutes remaining to make it a two-point game but Ciaran Thompson hit back immediately, with nerves shredded everywhere.

Conor Glass then finally got his point and punched the air in delight.

Michael Murphy had Derry hearts in mouths with a late free. He went for goal but it was blocked by an assortment of Derry players, and seconds later the final whistle went to spark wild scenes of celebration for those in red.