'Why isn't anyone talking about Dundalk?' 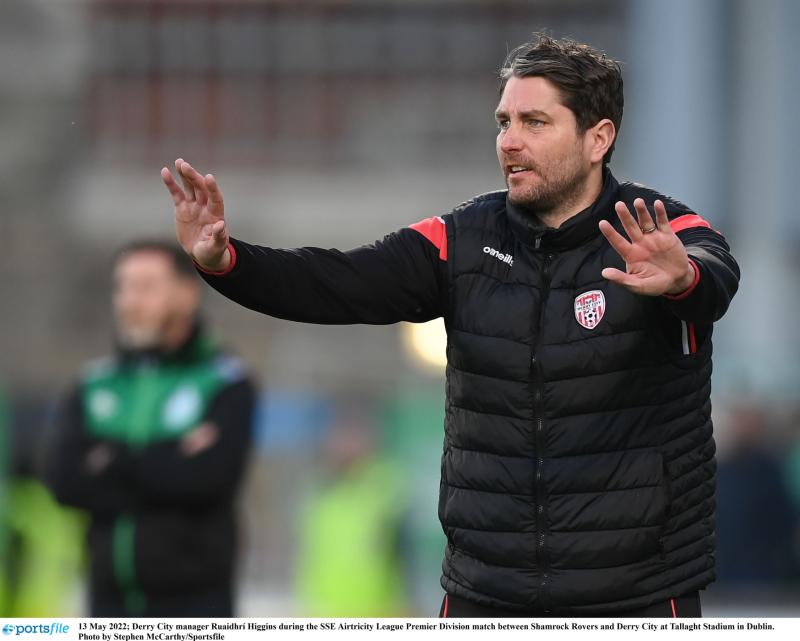 Derry City manager Ruaidhri Higgins is focusing only on Derry City only.

Ruaidhri Higgins admits he is amazed that no one is talking about Dundalk as title contenders ahead of their trip to the Brandywell this evening.

Stephen O’Donnell’s team are unbeaten in four games and come to Derry looking for a win which would take them to within four points of the Candystripes with a game in hand. Higgins, a former player and first-team coach at Oriel Park, knows the squad and the club very well and insists he always expected the to compete at the top this year.

“It amazes me how they are not even coming into people’s thinking,” he said. “They have got seven or eight league winners in their group, while Mark Connolly, their centre-back has played close to 300 games in England and Scotland, and Sam Bone won the cup with St. Pat’s last year and finished second.

“You then look at Daniel Kelly, Robbie Benson, Pat Hoban, Andy Boyle, Brian Gartland, John Mountney and Darragh Leahy. These boys have all been there and done it, over and over again. I find it strange that no-one is really talking about them competing. I said it before the first game of the season that I expected them to be there, and nothing has changed.”

Derry City go into the game hoping to rediscover the winning formula which took them top of the Premier Division for two months. The Candystripes performed well but lost 1-0 at Shamrock Rovers whose victory over UCD last night means there is now a seven-point gap at the top. Yet Higgins is not interested in ‘chasing’ anyone.

“People keep asking me about Shamrock Rovers, but I don’t care,” he stated. “I’m focused on what we’re doing and trying to win every single game we go into. Chasing Shamrock Rovers isn’t in my thinking, trying to beat Dundalk is all I’m thinking about to be honest. I’m interested in Derry City and Derry City only.

“Our performance at Rovers gives us real belief that we’re going along the right road. We’re playing really well and if we keep playing the way we have been playing over the last few games, the normally you get your reward. It wasn’t to be last Friday and that happens sometimes in football, but as long as we keep sticking to pour beliefs and keep believing that what we’re doing is right then we’ll be fine.”

Higgins meanwhile remains certain his team can find the goals that have eluded them and cost them points lately. Despite dominating against St. Patrick’s Athletic and Rovers in the last two games, City failed to find the net even once. But the manager is not worried.

“It happens to everybody,” he said. “I would be more concerned if we weren’t playing well, but the fact that we’re playing so well; the confidence is still really high in the group so I have no concerns whatsoever.

Traditionally, there are plenty of goals when Derry City and Dundalk meet with the Candystripes unbeaten in three against one of their biggest rivals of recent years.

Thomson wants City to be ruthless against Dundalk tonight

Primary Schools' Cup competitions proving as popular as ever

“They have really good attacking players,” Higgins continued. “You look at their front three of Kelly, Hoban and Stephen Bradley who is on loan from Hearts. There is David McMillan who is another league winner who is actually on the bench for them, so that shows the depth they have as well. They have really, really talented players and the way they are playing at the minute and the form that they are in, we’ll have to be at our very best to win.”

Brandon Kavanagh will face a late fitness test after picking up a leg injury at Shamrock Rovers last while Cameron McJannet (hamstring) remains a doubt. Patrick McEleney will also miss out, but should be available for selection again next week. Luck has been against Higgins this season in that regard.

“You have to get on with it,” he admitted. “It happens to everybody; I know it’s been key personnel but you have to take it on the chin and accept it. The players who are fit and who have been fit have been brilliant and that’s all I can ask for.”