Thomson wants City to be ruthless against Dundalk tonight 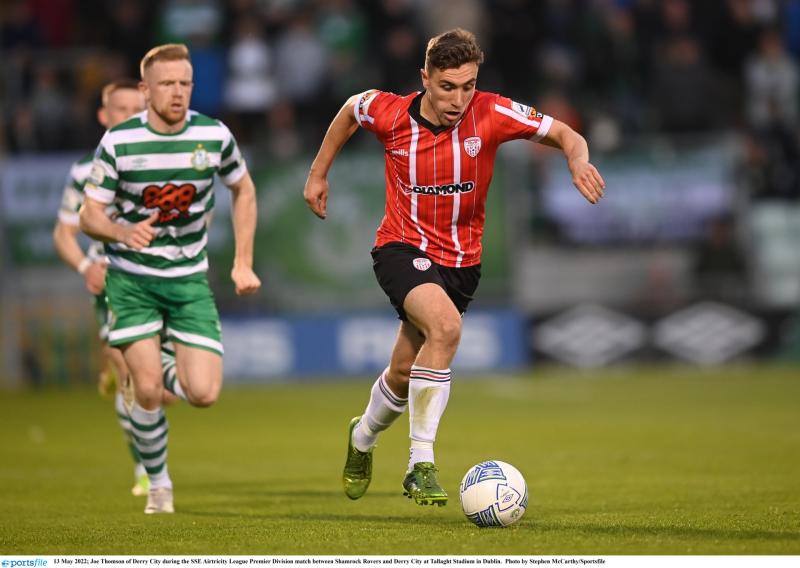 Joe Thomson scored in the 2-2 draw against Dundalk on the opening day of the season.

Joe Thomson has acknowledged that Derry City will have to become more ruthless if they hope to achieve success this season.

The Candystripes have won just twice in their last seven league games, and as a result have turned a six-point lead at the top of the Premier Division into a seven-point deficit behind Shamrock Rovers. City’s performances overall have largely been excellent, but their inability to finish off chances and put the ball in the net has cost them, particularly in recent games against Drogheda United, St. Patrick’s Athletic and Rovers.

The 1-0 defeat to Rovers was a particularly painful pill to swallow as City controlled the game at Tallaght for well over 70 minutes, only for the champions to score and take three points with their first opportunity in the game.

“It’s hard to put into words,” Thomson said. “I felt in the game we were by far the most superior team. I thought we played some lovely football and forced them to go long. Sometimes you know as a player that’s when you’re on top so it felt that we had total control. I honesty don’t remember them having a shot on target before they scored but they have got what they came for and we haven’t.”

City’s performance in front of 7,000 Rovers fans and the RTE cameras was one of composure, maturity and quality and despite the result, gives the City players evidence that they can compete with officially the best team in Ireland.

“I felt as if the in the first half hour our two centre-backs were playing on the half way line,” Thomson reflected. “I don’t think they got out in the first 20 minutes. We pinned them in at the start of the game and set the tempo. In the last 15 minutes of the second half, they came into it a wee bit, but it’s bitterly disappointing. We’ve got to be more clinical and ruthless if we want to get places. They had one chance and they have taken it and they have gone away with three points which I don’t think they deserve.”

City are now chasing Rovers by seven points. That puts more pressure on Derry to win against a team they have had great difficulty with over recent years. The tide has turned to an extent under Ruaidhri Higgins with City winning two of the last three against Dundalk, but regardless of opponent, Thomson knows that he and his team mates simply have to find a way of turning chances into goals.

“There’s not much more the management team can do if we’re not putting the ball in the back of the net,” he agreed. “In the Bohs game, we know ourselves that we weren’t at our best, even though we probably had the better chances to win the game. Then (against Pat’s and Rovers), we had total dominance but are coming away with just one point out of six. Honestly, it’s mind-boggling because we’ve played well but it’s no good if you’re not putting up points or wins. Really, over the balance of play over the two games, we should have six points, not one. We need to dust ourselves down and get ready for another big game on Friday.”

'Why isn't anyone talking about Dundalk?'

League title and League Cup for unbeaten City, but potential for more

Thomson was among the goal scorers when Derry City and Dundalk played out a 2-2 draw on the opening day of the season, a game which the midfielder rates as the toughest game he has played in this year.

“To be honest, that first game of the season, I think that’s the hardest game we’ve had,” he said. “I thought they were very good on the opening day of the season, but the games don’t get any easier. It’s a good side they’ve put together there and we know it’s not going to be easy.

“It's easy to say we have to put the ball in the back of the net. We’ve had four or five chances against Rovers and not scored, and on another night we would have scored two or three. It’s no good looking back and saying that because we haven’t scored and that’s bitterly disappointing, but more often than not, if we play like that we will come away with the three points rather than come away empty-handed.”