Oakleafers have too much for Monaghan 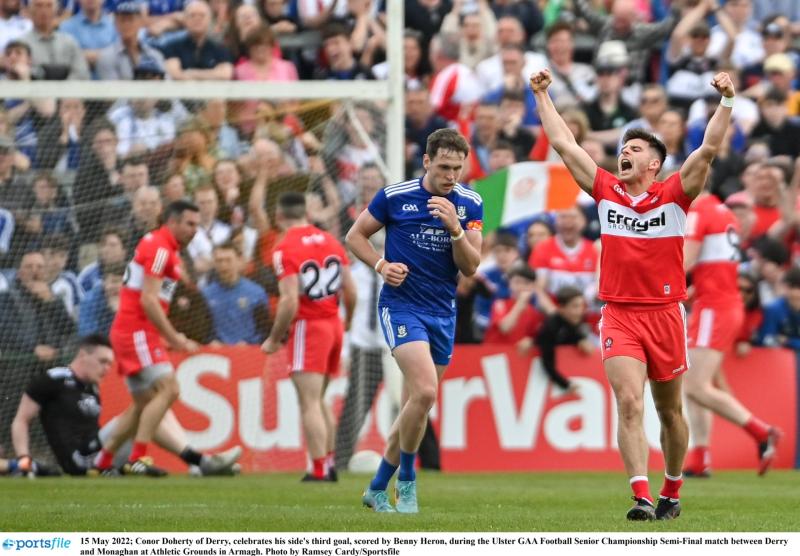 Derry are back into the Ulster SFC final for the first time since 2011 with another performance of pure heart, grit, determination and teamwork at the Athletics Grounds yesterday to knock out Monaghan.

Two goals from Benny Heron and one from Gareth McKinless were the major scores but it was so much more than that. And now, Donegal stand in the way of Derry in two weeks’ time and an Ulster title.

Derry got first blood with two minutes on the clock with a fine passing move ending with Paul Cassidy setting up Niall Toner in the corner who managed to dink it over despite shipping a heavy hit.

Derry doubled their lead on ten minutes when Padraig McGrogan popped a pass for Ethan Doherty who lofted it for Shane McGuigan to claim a mark 35 metres out and he duly converted.

The start only got better two minutes later when Shea Downey won a Derry kick-out and passed for Ethan Doherty who found Gareth McKinless off the shoulder. Breaking at pace through the heart of the Monaghan defence, the Ballinderry man skipped away from Shane Carey before sending a rocket to the roof of the net.

An off-the-ball foul on Jack McCarron earned a close-range free that he comfortably converted, and after Darren Hughes went to ground 25 metres out on the right sideline, McCarron found the posts again with the much more difficult chance.

Conor McCluskey and McKinless were both involved in the right corner before finding McGuigan who jinked into space and popped it over from 30 metres for 1-3 to 0-2 after 20 first half minutes.

It only got better for the Oakleaf on 24 minutes when Odhran Lynch was given the freedom of the left wing to play an arrowed pass into Niall Toner who put a great move on Conor Boyle to get away before executing an inch perfect fisted pass to Benny Heron to fire home to the net and extend the lead to seven.

McGuigan and Conor McManus exchanged frees and when Kieran Hughes was stripped in midfield by Conor McCluskey, Derry broke again and good work from McKinless ended with skill and composure from Niall Loughlin to add his name to the scoresheet and make it 2-5 to 0-3 after 30 minutes.

Derry were maintaining an incredible discipline in a packed defence, but Conor McCarthy managed to engineer enough space to point before a controversial moment at the other end. McCluskey found McGuigan with pass over the top of the Monaghan defence, and just as he looked it on goal, he was hauled down from behind by Dessie Ward. Referee David Gough said it was outside the square, with McGuigan dusting himself down to add the free and Ward escaping any form of punishment.

A Darren Hughes point closed the gap, but McGuigan was in the groove now for Derry as he added a fifth score with a super strike from just inside the ’45 after taking the pass from McKinless.

Conor McManus claimed the final score of the first half as managed to manoeuvre a bit of space away from Padraig McGrogan and cushioned it between the posts to put seven between them at the short whistle.

Monaghan knew they needed a big start to the half, and they got it when Gary Mohan won the throw-in and they worked it to substitute Andrew Woods who slotted between the posts after less than 30 seconds.

A Darren Hughes pass was collected by McCarron for the mark which he curled over off the left for 2-7 to 0-8.

The Oakleaf got their first score of the half on 46 minutes when Emmett Bradley went haring down the right, going clear of Conor Boyle before putting it between the sticks but McManus came back with a free.

A Woods shot ricocheted off the post into the arms of Chrrisy McKaigue after Derry had lost another of their own kick-outs but a monster of free from McManus again had his side just four points behind.

Monaghan were completely dominating the middle third now, and Dessie Ward added his name to the scoresheet for 2-8 to 0-11.

Derry claimed their own kick-out and Conor McCluskey turned off the afterburners, but saw his shot saved brilliantly by Rory Beggan, though it was pulled back for a free that McGuigan handily pointed.

McManus responded with a free after McKaigue was penalised for his foul on McCarron, but an off-the-ball foul inside gave McGuigan the chance to take his tally to 0-7 and make it 2-10 to 0-12 after 56 minutes.

The tension was high and the next man to get the scoreboard ticking was Niall Kearns with a dinked effort off the inside of the right as Conor Glass got a great block in on Dessie Ward.

A superb run from Padraig McGrogan ended with Paul Cassidy scoring off the left before Derry put one foot in the Ulster final. Conor Glass played a lofted ball in for Heron who played a one two off Ethan Doherty down the left and found the net, despite a partial diving block from Wylie.

Another Cassidy point brought a massive reaction from Rory Gallagher as Derry extended the lead to 3-12 to 0-13 but Monaghan came back again through McAnespie and a McCarron free.

Monaghan knew they needed a goal, and Seán Jones managed to get a shot away through a crowd that Odhran Lynch got fingertips to and calmly collected before another excellent tackle from Conor Glass on his own byline on Jones.

A McManus pointed edged Monaghan within five, and he got the final score of the game as Lynch tipped his free over the top but it wasn’t enough.