Derry City left frustrated as they can't beat St. Pat's at the Brandywell 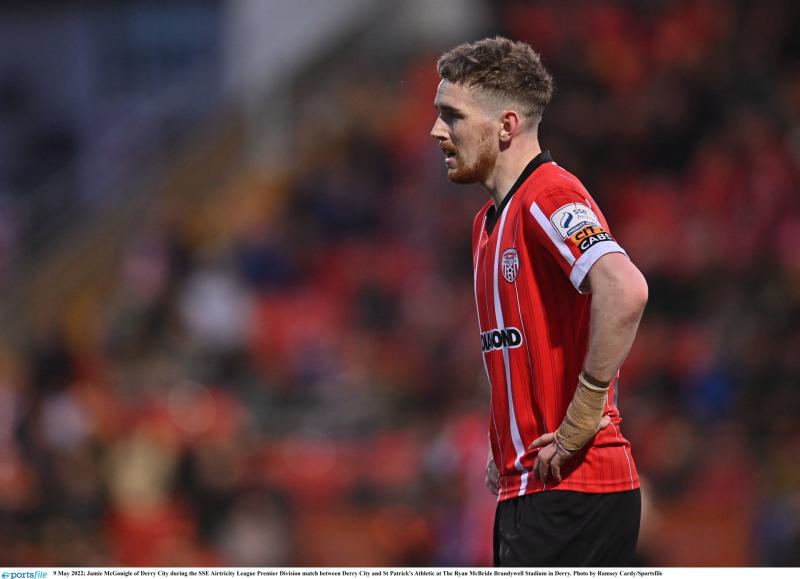 Derry City were left extraordinarily frustrated as they could not find the breakthrough despite dominating from start to finish against St. Patrick's Athletic.

While Shamrock Rovers were easily seeing off Sligo Rovers in Dublin, City dominated without scoring against a team they had beaten 4-0 just 10 days earlier, and they fell to second place in the Premier Division as a result.

Derry City began to asset themselves on the game very quickly afterwards and St. Pats’ goalkeeper Joseph Anang had to push a looping header from Lafferty over the bar as City forced three successive corners.

There was joy down both wings for Derry at this stage, with Maty Smith’s attempted pull back from the left just missing Jamie McGonigle, before Ronan Boyce came in from the right wing and found the striker, who swung at the ball and missed completely.

The Candystripes came agonisingly close to breaking the deadlock on 37 minutes when Will Patching’s corner was met by Eoin Toal, who powered a header at goal rom close range, only for it to hit Anang, who instinctively stuck his arm out to somehow keep the ball out. Derry City continued to ask all the questions in the early stages of the second, but more often than not their final ball let them down badly with Anang having nothing to concern him in the Pats’ goal.

The hour mark passed before City really threatened when Patching’s low ball across goal set up McGonigle whose shot was charged down, and amidst cries of handball from the crowd, Dummigan raced onto the loose ball and hit a fierce effort which was deflected behind for a corner.

Ruaidhri Higgins responded by ending both James Akintunde and Patrick McEleney on in a bid to find the killer touch which had eluded his team.

A piece of McEleney magic almost delivered for Derry City on 73 minutes when he controlled the ball 25 yards from goal and drove it powerfully through a sea of bodies, only for the ball to crash back off the base of the post with Anang beaten.

St. Pat’s had not been a force of any kind in the game, but they could have nicked it on 77 minutes with their first shot of any kind when Chris Forrester was picked out in space in the area, but he sent a weak shot wide of the target.

Derry City had a wonderful opportunity to win the game on 82 minutes when they broke on a three on one counter attack, but just when the final pass needed to be played, they slowed it down, with Kavanagh passing to McGonigle who could only shoot straight at Anang.