Bad day at the office for Institute

Winning run comes to an end 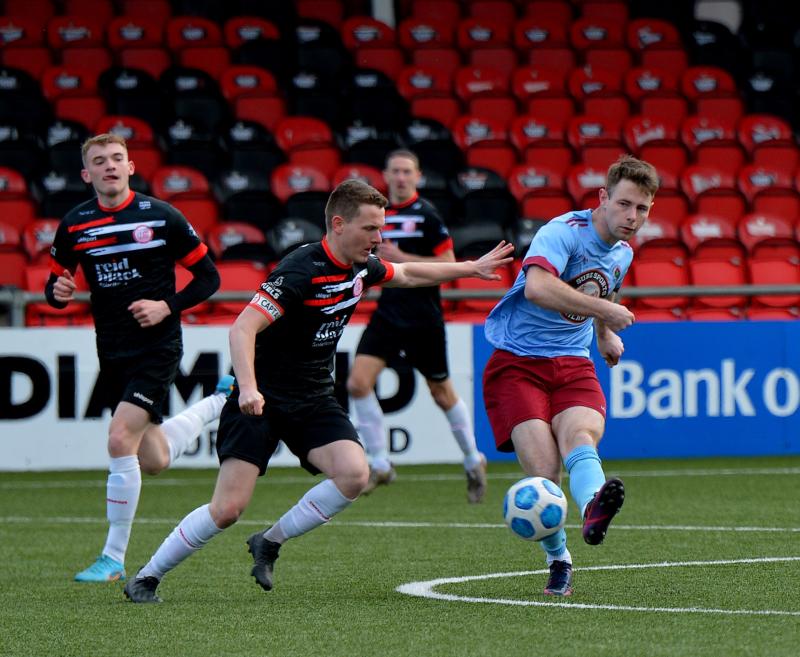 Institute fell to a heavy defeat at Dundela

Institute’s winning run came to an emphatic end as they were well beaten on the road at Dundela.

Brian Donaghey’s side had been on an incredible run of form heading into Saturday’s game and were the form team by a distance in the Lough 41 Championship having won five in a row. But it wasn’t to be on this occasion as Dundela inflicted a first defeat on ‘Stute since their lowly loss to Queen’s on March 12.

At the start of last month Dundela put four past ‘Stute in a one-sided win, but few really expected that to be the case again as the Derry side were on their best run of form of the season. But it proved to be the same again as the home side were clinical in front of goal.

The opening goal came just 16 minutes into the game when John Connolly saved Rhys Annet’s shot, but the ‘Stute goalkeeper could do nothing as the rebound fell to Eoin Kane who couldn’t miss.

‘Stute responded well and came so close t equalising through Jamie Dunne. Having scored a spectacular free kick against Queen’s recently and found the net against Ards last week, the ‘Stute midfielder was not short on confidence, but his free kick flew just wide into the side-netting.

Dundela’s lead was doubled on the half hour mark as ‘Stute were caught out from a set-piece when Tony Kane’s corner was met by a thunderous header from Kyle Owens who gave Connolly no chance to make it 2-0.

The half time break evidently did not help ‘Stute who conceded a third just two minutes into the second half when Rhys Annet was allowed to turn and place the ball past Connolly to make sure of the three points.

‘Stute did threaten to make a game of it when they pulled a goal back, the in-form Jamie Dunne finding the net to give the visitors some hope.

‘Stute kept going and tried to get another one back to make it a nervy finish for the hosts, but Dundela made sure of the win on 77 minutes when Eoin Kane grabbed his second of the game, beating Connolly to the loose ball and scoring from just outside the area to make it a very enjoyable day for the home side.

For ‘Stute, it was an unexpected scoreline given recent results, but they can still finish a difficult season strongly when they host Knockbreda at the Ryan McBride Brandywell Stadium this coming Saturday.