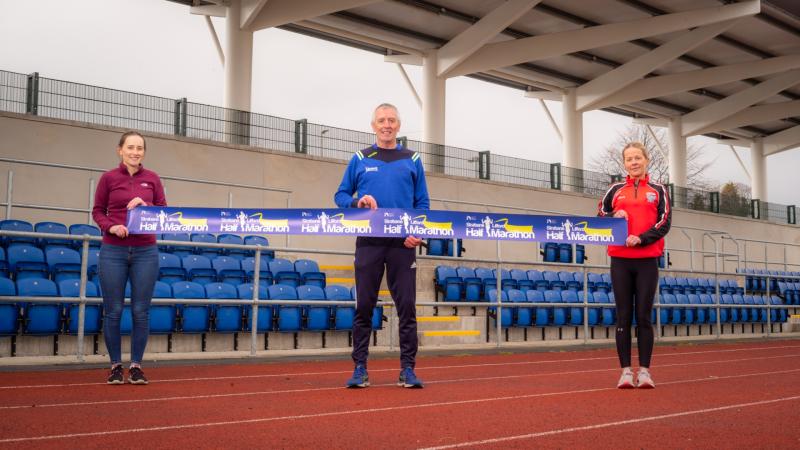 Pictured at the launch of the Strabane Lifford Half Marathon are, from left, DCSDC Events Co-ordinator Catherine Ashford, Mark Connolly and former race winner Claire McGuigan.

Excitement is building in the local running fraternity for the return of one of the North West’s most popular half marathon events on Sunday May 15th.

The Strabane Lifford Half Marathon is hosted by Derry City and Strabane District Council in partnership with Lifford Strabane Athletics club and is being held for the seventh time following a three year Covid enforced hiatus.

It is one of only two cross border Half Marathons in Ireland and is set to attract a field of 1,200 runners.

Registration for the event has now opened and Mayor of Derry City and Strabane District Council, Alderman Graham Warke, urged runners to confirm their place now to avoid disappointment.

“The Strabane Lifford Half Marathon is now firmly established on the local athletics calendar and the public have attended and taken part in their thousands every year,” he said.

“There is a huge appetite among runners to take part in major events again after being forced to run alone or in small groups during the lockdown restrictions.

“It will be a special and quite emotional moment to see over one thousand runners of all levels back at the start line again and finishing on the running track at the Melvin.

“I know registrations have been flying since they opened and the race will sell out so I’d encourage runners to grab their spot now while they can.”

All Half Marathon entrants must be 18 or over on the day of the race which starts at 9:30am on Sunday May 15th from Meeting House Street in Strabane and will finish at the Melvin Sports Complex.

Registrations for this year’s half marathon will be limited to 1,200 runners so book early to avoid disappointment – Entries are now open www.derrystrabane.com /slhm​and will close strictly on Sunday April 22nd.

All finishers will receive a specially commissioned t-shirt and medal.