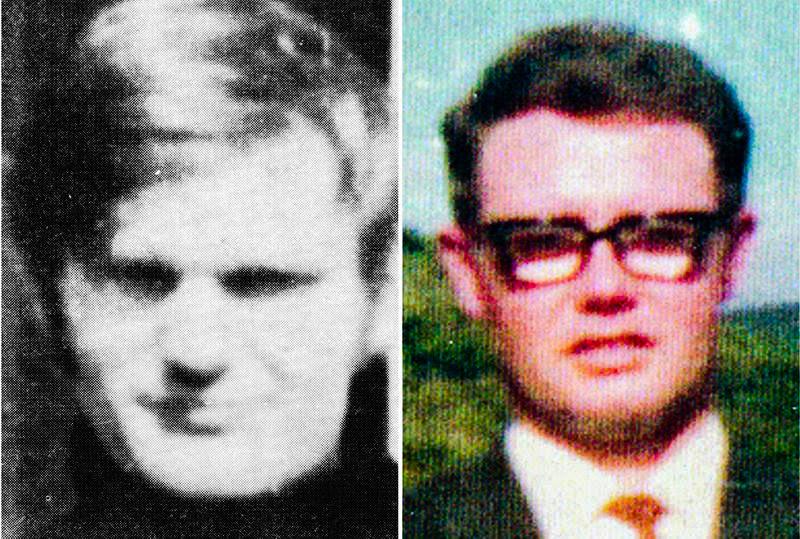 James Wray (left) and William McKinney who died on Bloody Sunday. The High Court in Belfast today quashed the PPS decision to drop the murder case against Soldier F

“A mixed day” was the reaction of Liam Wray over the High Court in Belfast's decision to quash the Public Prosecution Service's (PPS) decision to drop murder charges for Soldier F for the killing of Liam's brother James on Bloody Sunday.

A ruling from Senior judges said the Public Prosecution Service (PPS) should rethink its decision that Soldier F should not stand trial for murder regarding the deaths of James Wray and William McKinney.

Lady Chief Justice Dame Siobhan Keegan said: “This is a rare occasion where we consider the decision should be quashed and reconsidered.”

However, the court dismissed challenges to the PPS dismissing charges to other paratroopers regarding the deaths of Mr McKinney, Jackie Duddy, Michael Kelly, John Young, Michael McDaid and Bernard McGuigan.

Identifying issues surrounding the admissibility of evidence from ex-servicemen compelled to give statements at the time, Dame Siobhan held that a senior prosecutor had applied the correct legal test in those cases.

However, Liam – who was 18 when his brother James was killed on Bloody Sunday on January 30, 1972 – admitted the verdict was a bittersweet one given other relatives of those killed had their own case against the PPS rejected.

He said: “It's a victory in one sense in trying to pursue the prosecutions for those responsible for the murders and attempted murders of our relatives.

“But it's a mixed day because other families have had their cases rejected by the court.

“The decision not to prosecute last year was the wrong decision and even if we get it up and running again, valuable time has been lost.

“Fifty years on, and when we thought after the Good Friday Agreement that things would be more straightforward and expedient, we have met hurdle after hurdle and delay after delay.

“The Bloody Sunday Enquiry Report was in 2010. The police investigation didn't start until a few years later. Then the PPS in 2019 come out with the decision just to prosecute one soldier and then they dropped the case last year.

“We are disappointed for the other families (who didn't get the verdict they wanted) because we've always seen ourselves as one group because of Bloody Sunday. When one doesn't get what is their just right, the rest of us feel that too.

“I'm not sure when the next hearing will be but I will be talking to my solicitor later on today and tomorrow. At this moment in time, I'm trying to take in what is another step to correct one of the blunders on the road but that road is a long and arduous one. We're still determined to keep on as best we can.”

Although the Wray family are pleased that the PPS decision regarding James' case was quashed, there is a frustration that they've had to overcome so many legal obstacles just to get justice for him.

Liam added: “I said a few years ago, and unfortunately it's a prediction that seems to be right, we are suffering 'amnesty by attrition'.

“This has been dragged out so slowly with challenges and counter-challenges, it seemed to be a long, long drip feed until with every day, month and year that passes by, there are going to be less witnesses around and more clouded memories.

“A lot of the relatives have passed away and we heard that another one of the soldiers who murdered somebody on Bloody Sunday passed away last week. Although my information regarding Soldier F is that he is hearty and well.

“The problem here is the competence of the judicial process. A lot of people are saying, 'you just cannot get justice here', 'the PSNI are not good at their job' and 'the PPS are not on top of their job'.

“So your own confidence in the agencies is at an all-time low.

“But there's a great sense in Derry about what is right and we're going to keep going – that's just the nature of the Derry people.”

Thirteen people were killed when soldiers of the British Parachute Regiment opened fire on civil rights demonstrators in Derry on January 30, 1972. Another of those wounded died later. That day, of course, became known worldwide as Bloody Sunday.

In 2010 the Saville Inquiry into the events on Bloody Sunday established the innocence of all of those who died.

Families of the victims later brought legal challenges against decisions which meant five of the paratroopers who were on duty in Derry on Bloody Sunday would not face trial for a number of the killings that happened that day.

In July last year the PPS announced it was discontinuing charges against Soldier F for the murders of William McKinney, 26, and James Wray, 22, plus at least five counts of attempted murder.

The case against him was reviewed following the collapse of separate criminal proceedings against two other military veterans for Troubles-era offences.

Based on an assessment of the admissibility of evidence from the time, it was concluded that the test for prosecution was no longer met.

At the time of the shootings the Royal Military Police (RMP) took statements from soldiers who opened fire, with further accounts prepared for the original tribunal chaired by Lord Widgery in 1972.

"After the national insurance hike, they're taking the 1.75% rise back off us"

The case centred on a dispute about whether those statements would be ruled inadmissible in any criminal trial.

According to the families, the prosecuting authority's assessment of the evidence was legally and fundamentally flawed.

During a four-day hearing it was claimed that a decision not to charge one of the paratroopers with Mr McGuigan’s murder “bordered on the perverse”.

But counsel for the PPS insisted it had properly considered the evidential test and likely outcome of any criminal process.

He described the process as “unimpeachable” and argued that the authority would be abdicating its responsibilities by bringing to trial cases regarded as having no realistic prospect of securing convictions.

Judges were also told that the paratroopers interviewed about the events on Bloody Sunday were compelled to give statements in violation of their right to protection from self-incrimination.

Their accounts to senior ranking Royal Military Police (RMP) officers were involuntary and legally inadmissible as evidence, it was contended.

Referring to the paratrooper’s accounts to Widgery, she said: “It is unfortunately infected with the same problem as the other 1972 evidence, which is the element of compulsion coupled with the absence of individual legal protections.”

However, the court reached a different conclusion regarding the decision to discontinue criminal proceedings against Soldier F.

Prosecution had been recommended, based on a reasonable prospect that third party statements from other soldiers would be admitted at trial, Dame Siobhan pointed out.

She stated: “Overall, we do not consider that the rationale for the change of mind which we have set out above is sustainable.

“In our view it strays too far away from the original merits-based assessment of the PPS in circumstances where in fact little if anything of direct relevance to the Soldier F prosecution has changed.”

Confirming that the PPS should carry out a reassessment in the Soldier F case, the Chief Justice added: “There is a difficulty with the conclusion that the reasonable prospect of conviction previously found had dissipated so that the prosecution should be discontinued at this stage.”