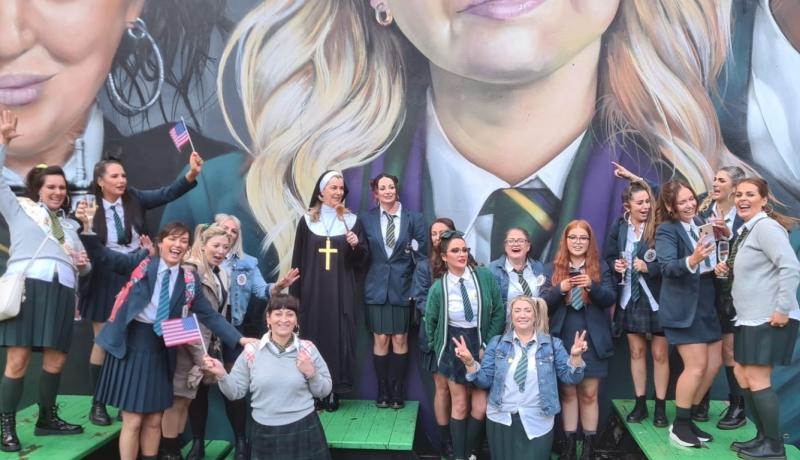 Laura and her friends dressed up as the Derry Girls cast for a birthday celebration they'll never forget!

Laura McCafferty, originally from Derry but currently living in Scotland, returned home to celebrate her 40th in style.

Laura and a group of her friends dressed up and took part in their very own Derry Girls Tour.

They visited all the Derry Girls hotspots in the city, showing off everything Derry has to offer in the most hilarious way, grabbing a cheeky drink or three as they went.

Laura's friend, Dannika, said the day was the best craic and everyone had an amazing time, "We were accompanied by six Scottish wans, two Australian wans, one American wan, two County Derry wans and a pile of Derry wans.

"The theme was Derry Girls and the day began with lunch in the Bentley, photos at the Derry Girls mural, Cream Horns in Pump Street, and retail therapy in the Ferry Clever Store.

"A visit to the outside of the Long Tower where Mary smirked and cried, running along the side of the walls to see Beechwood Street and the site of the Wee Shop before visiting Lizzy O'Farrels for refreshments.

The third and final series of the show will air later this year.

"Next we were off to the Guildhall to see where Clinton gave his speech and James admitted that he was a Derry Girl.

"The Thirsty Goat was next for a heat and more refreshments before returning to Lizzy's for round two. Waterloo Street is so good we all had to go back again."

Happy 40th Laura from all of us at Derry News!