Bust of John Hume is unveiled at Irish Embassy in London 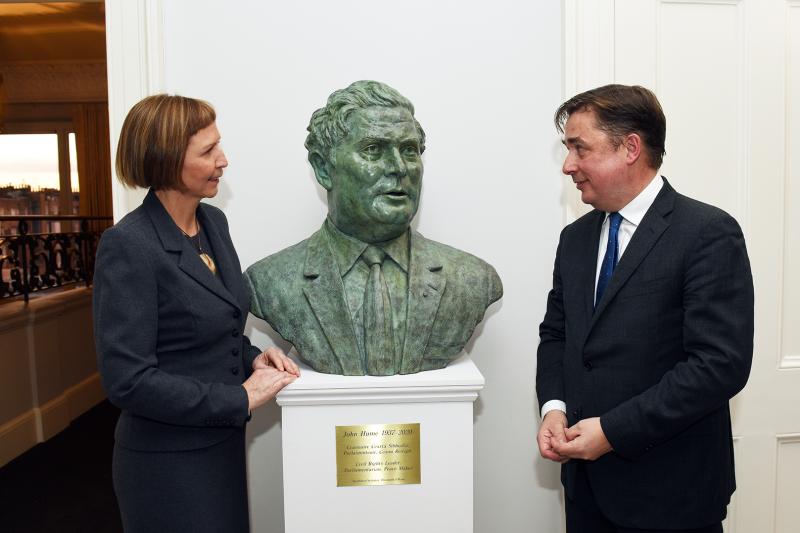 The John Hume bust sits proudly in Ireland's embassy in London. His son, John Jnr, is with the work's sculptor, Elizabeth O'Kane

Derry political giant, John Hume, was honoured this week at the Irish Embassy in London with the unveiling of a bust in his likeness.

The former SDLP leader whose formidable efforts helped to bring an end to The Troubles and broker the Good Friday Agreement, passed away back in August 2020.

To honour his legacy, Dublin-based sculptor, Elizabeth O'Kane, was commissioned to create a bronze portrait bust that was was unveiled by Hume’s son, John Hume Jr, at a small event attended by MPs, Lords, members of the Hume family and representatives from the John and Pat Hume Foundation.

The Irish Ambassador to the United Kingdom, Adrian O’Neill, said: “John Hume is rightly remembered and honoured as a key architect of the peace process. 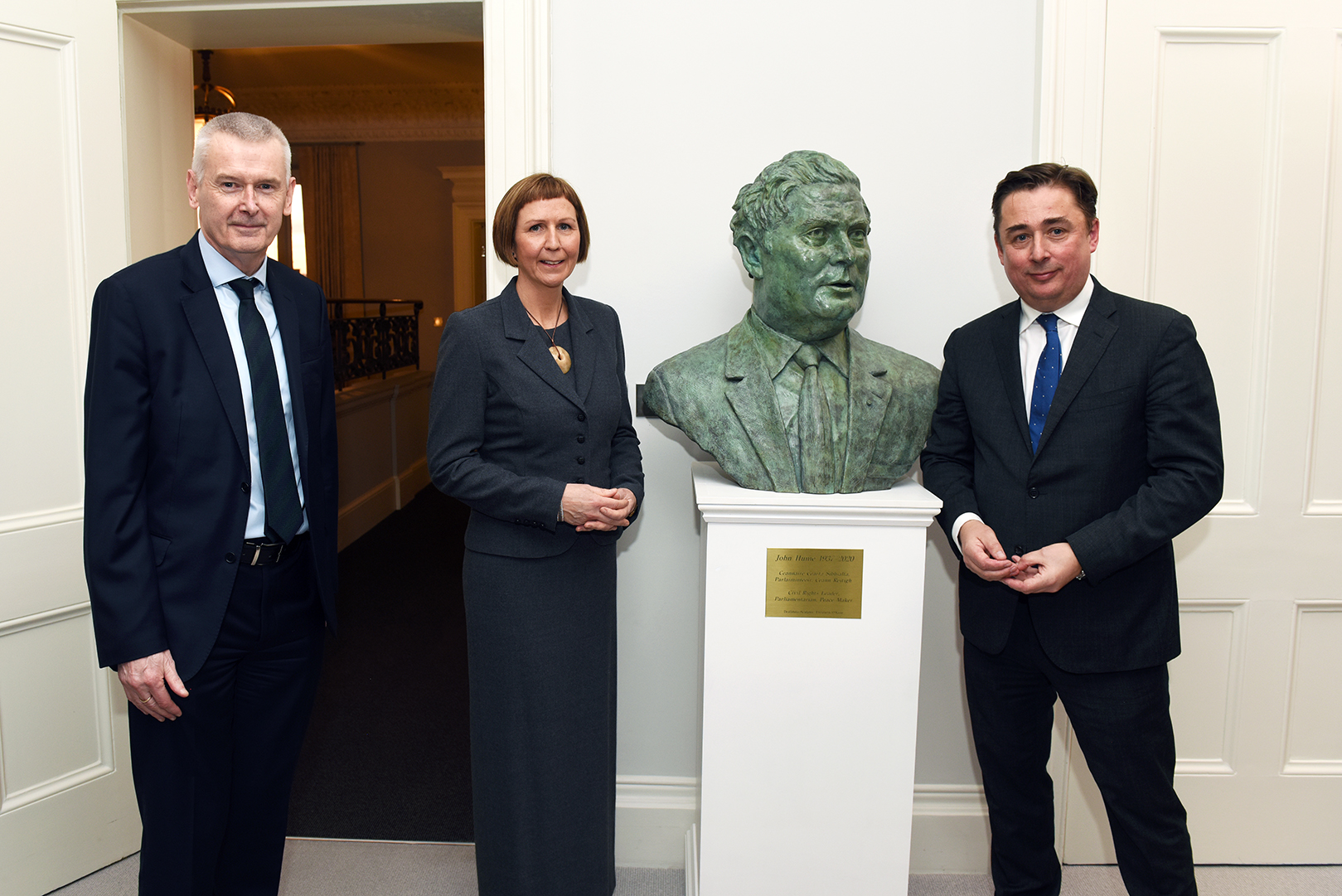 The Irish Ambassador to the United Kingdom, Adrian O'Neill, sculptor Elizabeth O'Kane and John Hume's son John Jnr with the bust commissioned in honour of the former Foyle MP and SDLP leader who was instrumental in bringing about the Good Friday Agreement.

“His achievements as a peacemaker were uniquely honoured by being the only person in history to win the Nobel peace prize, the Gandhi peace prize and the Martin Luther King award.

“In a nationwide poll in 2010, he was voted the greatest Irish person in history, a recognition of the gratitude, respect and affection for him across the island of Ireland – a feeling we rightly honour today with the installation of his bust in the Irish Embassy in London

“From John’s early work with the credit union through the civil rights and political struggles his essential message never changed – in his own words, ‘leaving the past behind us and building a new future together’.”

He added: “It's really important, in my view, that the Department of Foreign Affairs have done this. John's relationship with the Department over many, many decades was able to produce the pressure in London, Washington and Brussels to bring about what became the Good Friday Agreement.”

The bust at Ireland's embassy in the United Kingdom is currently residing in a room alongside a table once owned by another giant of Irish politics, Daniel O'Connell who successfully campaigned for Catholic emancipation back in 1829.

Elizabeth O'Kane, who sculpted the bust of Hume, has had a distinguished career with her work to be found in various public and private collections, including the National Library of Ireland, The National Concert Hall, University of Limerick, University College Dublin and Shannon Airport.

John Hume's son, John Jnr, was more than delighted with how Elizabeth portrayed his father.

He said: “I was completely taken aback by it – I have goosebumps. It's really the expression on his face – it's him. Liz O'Kane has done an amazing job. She really has captured him.

“I'm just so grateful to see it and I look forward to the rest of the family seeing it.”

Elizabeth O'Kane admitted that the bust took a year to make but she was honoured to sculpt someone who she regards as hero and that she was flattered to be commissioned the work.

She said: “I worked a lot with John Hume Jnr and he suggested sculpting his father in his early forties – around the time when he was first elected to the European Parliament. 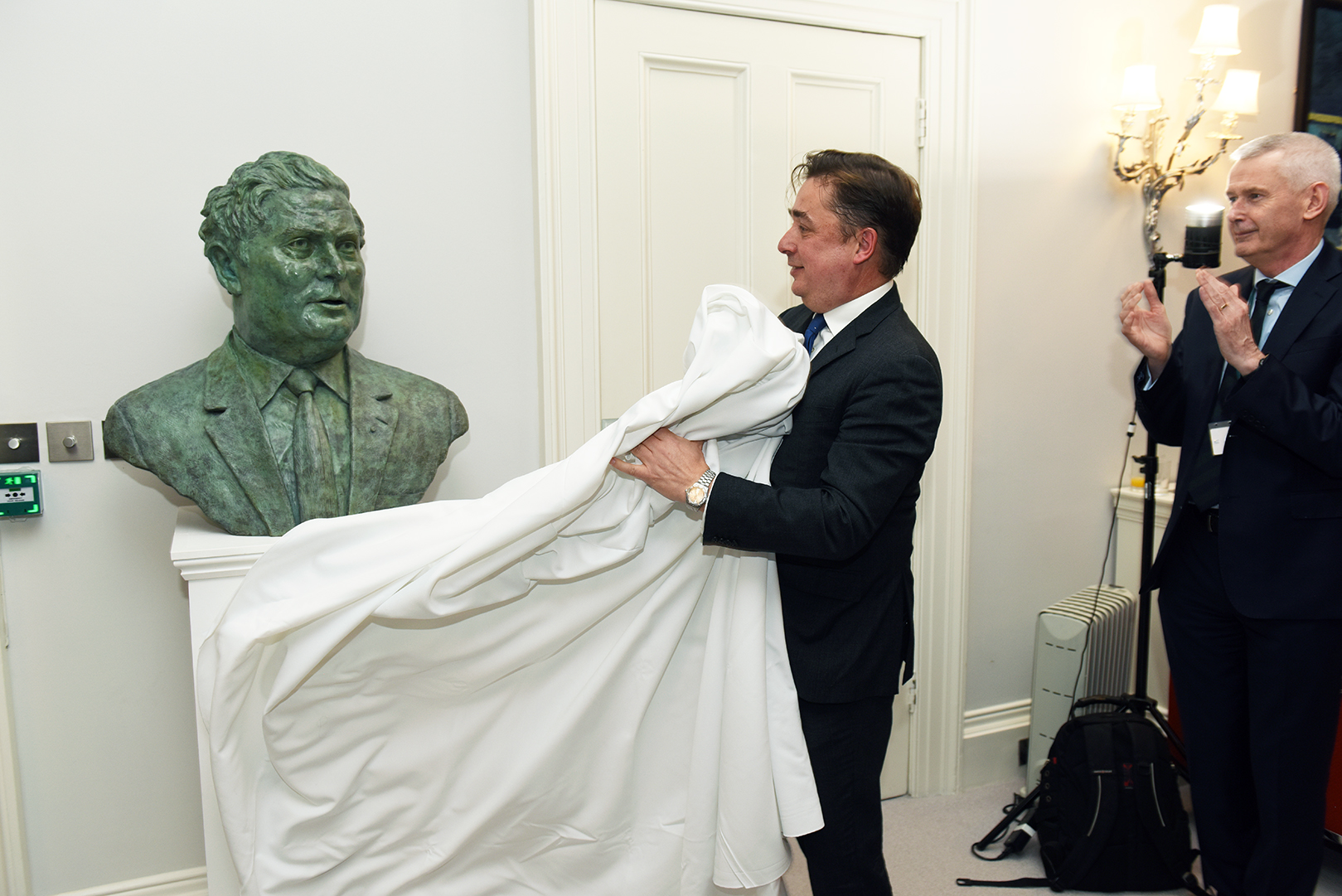 The moment when John Hume Jnr unveiled the bust of his father John Snr at the Irish Embassy in London. Ambassador Adrian O'Neill looks on.

“The late Pat Hume (John's wife) asked if his hair could be nicely-combed. The family suggested he be shown without his glasses, and wearing the pin of the Officier de Legion d’Honneur.

“Four replicas were cast, the first was unveiled in the Embassy or Ireland in London on Wednesday evening. The second has been installed at the Residence of the Irish Ambassador in Washington DC and will be unveiled in the next couple of months, Covid permitting. The third will be installed in The European Parliament and the fourth will be in Iveagh House, Dublin, the Headquarters of the Department of Foreign Affairs.

“I sculpted the original in clay, referencing photographs of John Hume. It took four or five months to sculpt John’s likeness in the clay, the sculpture is one and a half times life size.

“I then made a mould and prepared wax casts to be cast in bronze in a Dublin foundry. The foundry process takes many months again for each casting. In total it was about a year’s work.

“It was an enormous honour to be awarded this commission. Growing up in Northern Ireland during the Troubles, I have always admired John’s persistent tireless efforts for peace. He has always been a hero of mine so it was extremely flattering to be the selected artist.

“I have sculpted (former Irish Taoiseach) Dr Garret FitzGerald and many important dignitaries, but John Hume’s portrait was the most special and personal for me.

“No commission is easy, every sculpture is difficult and it is never easy to capture the likeness, I would never take this for granted. I always try to get feedback from family or colleagues as they always know the sitter best.”