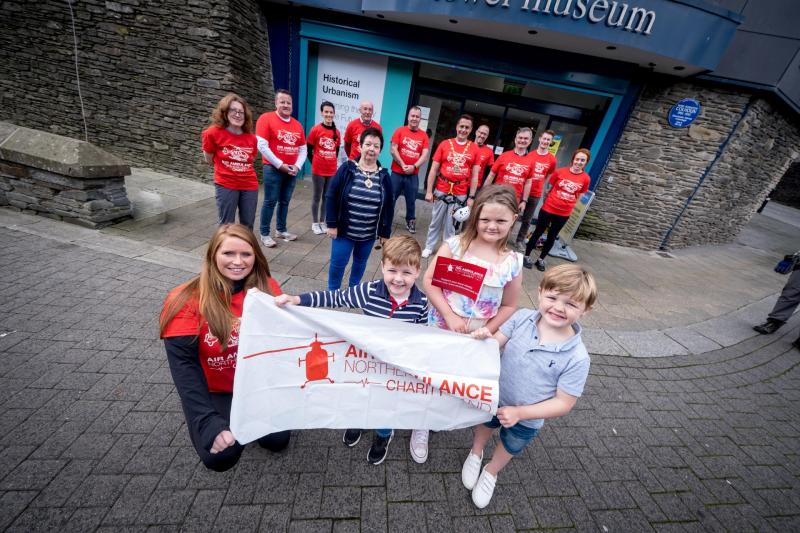 Members of The Derry Chamber of commerce swooped down on the city from a great height to raise money for a good cause.

A charity 100 metre abseil from the Tower Museum building in Derry was taken on by fearless Chamber members in support of Air Ambulance Northern Ireland.

They were joined by members of Find Insurance who will be sponsoring next month's Chamber's President's Annual Dinner. A total of 12 people made the descent.

Air Ambulance NI works in partnership with the NI Ambulance Service to provide the helicopter emergency medical service for the region.

On average, the charity is called out to help two critically ill or injured people every day and has a daily fundraising need of £5500, equating to over £2m per year.

Dawn McLaughlin, Derry Chamber President, said: “I am delighted to announce Air Ambulance NI as my charity partner as part of this year’s President’s Annual Dinner.

“As Northern Ireland’s only helicopter emergency medical service, Air Ambulance NI does incredible work for people in vulnerable and often critical situations across Northern Ireland, every day of the week, 365 days a year.

“Charitable donations and volunteers are vital to supporting their work and I am delighted that we will raise vital funds for the organisation via the popular raffle draw taking place at our dinner. I’d like to thank everyone who took part in the abseil and everyone who has donated.”

Karen McQuillan, Finance Director, of Find Insurance, added: “As the main sponsor of this year’s Derry Chamber President’s Annual Dinner, Find Insurance are thrilled to be supporting the work of Air Ambulance NI.

“The charity is one of Northern Ireland’s most recognisable organisations and they do stellar work for everyone in our community, often in the most difficult of circumstances.”

Air Ambulance Northern Ireland added their gratitude for the money and awareness raised by the Chamber and highlighted how crucial such events are in helping them function.

“Fundraising, charitable donations, and partnerships like these are crucial to our work and help us provide this essential service for the people of Northern Ireland.

“We are grateful to everyone who took part in the abseil and to Dawn and the Chamber for partnering with us.”