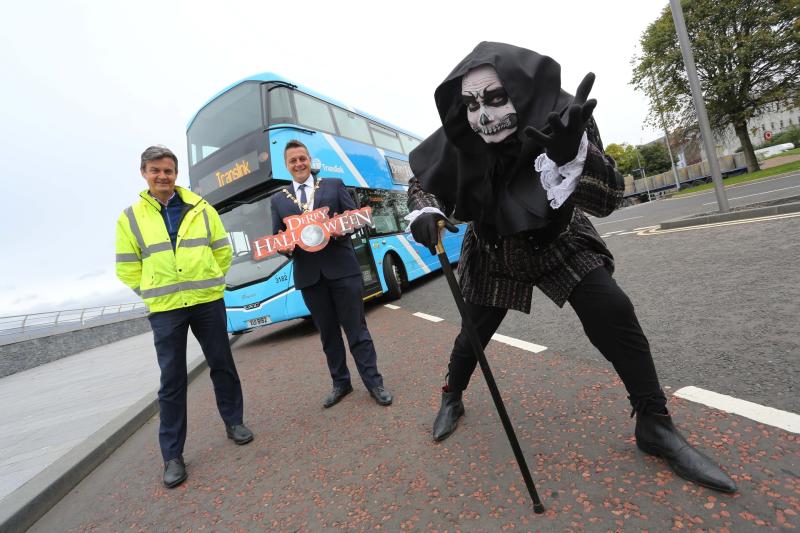 With just weeks to go until Derry's internationally acclaimed Halloween festivities, Translink has announced it is partnering with Derry City and Strabane District Council to operate a special shuttle bus service throughout the celebrations.

The service will transport passengers over the three nights of festivities planned for the City from October 29 to October 31.

Locations for this year’s Halloween celebrations-themed “Awakening the Walled City”-include the city's Quayside, the Guildhall Square, Ebrington Square, St Columb's Park. There will also be festivities in Strabane and Buncrana, crossing the border for the first time this year.

Mayor of Derry City and Strabane District, Alderman Graham Warke, was on board a bus today to welcome the announcement of the Translink shuttle service.

Mayor Warke said: "The excitement is already growing here in the city for the return of our world-famous Halloween programme.

"I am delighted that Translink have announced their support for this year's celebration with this fantastic shuttle service which will make our outdoor programme an even better experience for families.

"Much thought has gone into creating a safe and socially distanced programme this year, which has meant spreading the activities and installations out over a wider area taking in a number of exciting new locations.

“The Translink service will fast track families if they have younger children who may not want to cover the full trail, and ensure everyone can enjoy the full experience on offer.

"I want to extend my thanks to Translink and all our partners for their support in bringing the magic back to the streets of Derry this Halloween."

The shuttle bus service will operate between the NW Transport Hub and Foyle Street, between 5pm and 10pm on October 29 to October 31, transporting passengers between Waterside and Cityside.

The NW Transport Hub will also play a key role in transporting visitors to and from the City, with visitor numbers expected to be high this year after the cancellation of last year's celebration.

Tony McDaid, Translink Service Delivery Manager said: "Halloween is such an important date in the calendar for this city and we're very much looking forward to playing a key role in connecting people and communities once again throughout the event.

“We wish everyone a safe and fun Halloween and encourage passengers to remember to wear face masks and use hand sanitiser when travelling."

You can find out more about the full programme on derryhalloween.com