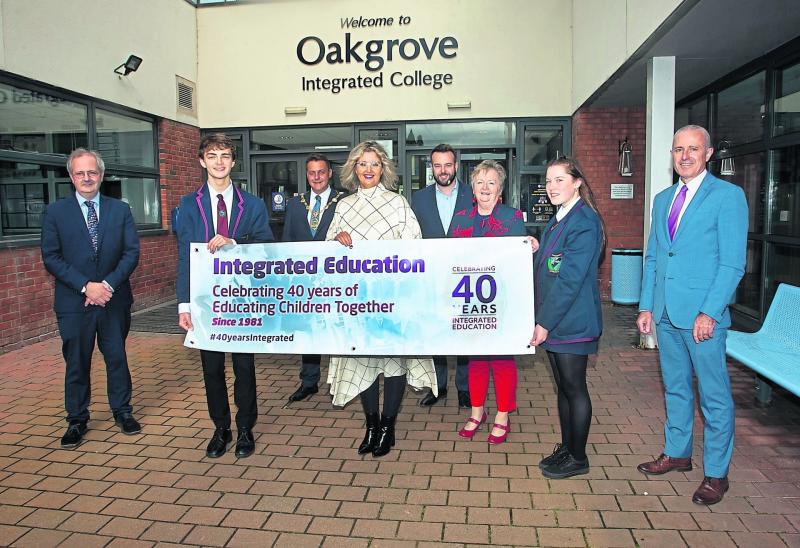 Forty years ago this month the first ‘integrated school’ in Northern Ireland opened in Belfast. It started with 28 pupils in a scout centre.

In this article the Principal of Oakgrove Integrated College, Katrina Crilly, explains why she is so passionate about her school and about its founding principles that, she says, are all about teaching pupils respect for the diversity that’s out there...

As many of you probably know, integrated education here has been around for a long time.

This year it’s celebrating its ruby anniversary - it’s 40 years since Lagan College was established in Belfast. Last week we celebrated this by inviting the Mayor and MP for Foyle to unveil our banner.

Surprisingly, despite recent media coverage about the founding of Lagan, it would seem that integration is still largely misunderstood.

Here in Northern Ireland/ North of Ireland, it’s taken to mean a school where Catholic and Protestant children are educated together. It’s much, much more than that.

Here at our school, Oakgrove College, we prepare our students to meet and deal with that diversity by providing a learning environment where children and young people from all faiths and none can learn with, about and most importantly from each other.

Acceptance and respect for all are key concepts in everything we do.

Our desire for every child who joins the Oakgrove family is the promotion of equality, and that must include the forging good relations with everyone in the school and their families regardless of their religious, cultural, social or other background.
Integrated education is, at its core, value-driven and child centred. It is delivered through a holistic approach.

Our world, as I have pointed out, is full of diversity; that’s the natural law, and so children deserve the opportunity to flourish in that diverse environment both at school and in wider society.

How else are children supposed to learn about other cultures and backgrounds enough that they understand and accept difference as a natural part of life?

We are about preparing children for life and work, providing children with a very real experience of living and working successfully alongside people from different backgrounds and beliefs.

Many believe that all schools are integrated, but what they actually mean is that they are “mixed”. The two are very different.

Many schools accept children from different faiths and backgrounds and, yes, they are educated alongside each other and under one roof.

However, the school does not change its ethos or identity for that child, there is an understanding that the child can attend however the school’s religious ethos remains the same and the child “fits in”.

In some respects, the child sacrifices their identity to attend the school.

In an integrated school, no child has to sacrifice their identity to attend, as all backgrounds and faiths, and all our differences are celebrated and nurtured.

At an integrated school no child has to deny his/her culture, background or religion.

Imagine a place where you can honestly be yourself, where your difference is celebrated as the norm, and where you grow in the knowledge and understanding that we are all equal.

This is on top of achieving high academic outcomes and successful career paths. That place doesn’t have to be imagined: it is here – in an integrated school.

It is certainly true that all schools provide the NI curriculum and will provide broadly the same extra-curricular activities, but an integrated school will give this and more.

Only in an integrated school will children see what is familiar from their background but also learn what is unfamiliar to them, but “the norm” for others in the class.

It’s a fact that this is the only place in the world where parents set up their own schools.

They did so because of a passionate belief that, after years of conflict, we could only help to solve the communal divides in this society by bringing people together.

In September, 1981 Lagan College opened its doors. 40 years on can we say we are truly the mixed society they wanted us to be? We have, I would suggest, still some road to travel!

But the journey is worth the effort. And as Principal of Oakgrove Integrated College, I can say we are committed to making our contribution.