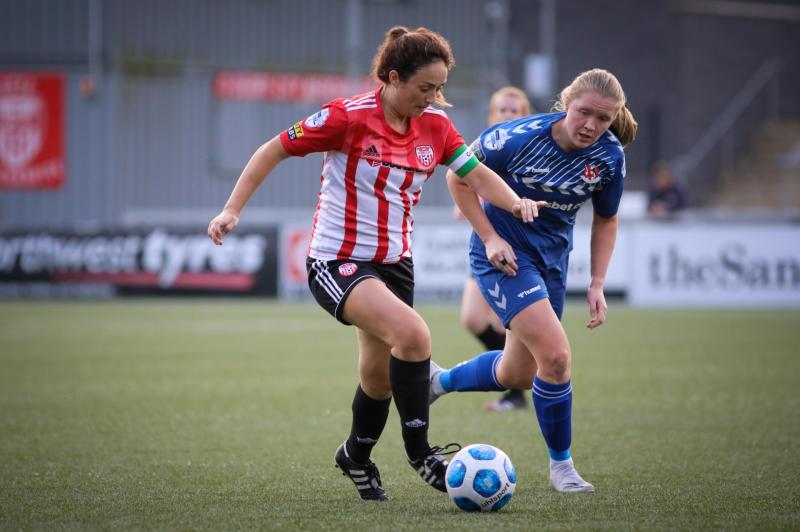 Derry City Women finished their 2021 home campaign with a well-earned, if hard fought, victory over Crusaders Strikers at the Brandywell last night.

Goals from Caroline Gallagher and Cathleen Kelly either side of half time were enough to nullify a late Crusaders fightback.

With twenty minutes gone in the contest, it looked as if it was only a matter of time before Crusaders would take the lead.

From the first minute, Emily Wilson took every opportunity to put the Derry defence under pressure.

Only a combination of poor finishing and near misses kept the scores level, as Wilson, time and again, supplied balls from the right.

Derry managed to steady the defence and registered their first attempt on goal on 18 minutes, as Kathryn Canavan shot high and wide.

The contest was more even by the half hour mark, as Derry struggled to clear a succession of corners.

On 34 minutes, Tara O’Connor had a great chance of putting Derry in front. Set free by a superb Paula McGrory through ball, O’Connor’s attempted lob of Harvey Clifford in the Crues goal, ultimately ended up in the keeper’s hands.

Caroline Gallagher opened the scoring in 42 minutes, once again after an excellent assist by McGrory. Gallagher finished with power and precision and in all reality, it came as no surprise.

The Crues keeper had to be alert two minutes later as McGrory unleashed a shot that the keeper did well to tip over.

The second half started in a similar manner to the first but as much as Mairead McCann attempted to influence proceedings for the away side, Paula McGrory was a match to every intent.

Emily Wilson squandered a chance on 62 minutes to level the contest and a minute later, was unlucky as she hit the post. Paula McGrory retaliated a minute later by smashing the Crues bar.

On 67 minutes Derry were in dream land, as Cathleen Kelly didn’t waste a loose ball and a lost keeper outside her penalty box.

The joy was short lived though, as almost immediately, Catilyn Hamilton, superbly pulled one back for the visitors.

With twenty minutes to go, Emily Wilson continued to probe. Her 76th minute strike was well saved by Claire Friel in the Derry Goal.

The resulting goal kick left the attendance of fifty in no doubt as to what the away bench thought of the decision.

For all their late pressure, Crusaders could not break down a resolute Derry Defence. Derry even dared to seek a third and safely seen the game out, much to the delight of manager Kevin McLaughlin and players.