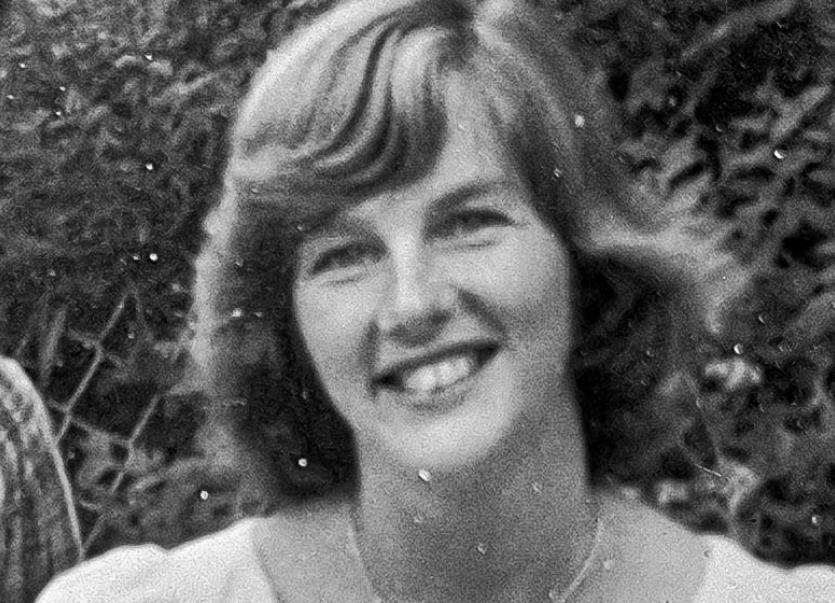 Mother of one Joanne Mathers was murdered on April 7, 1981.

Forty years on from one of the most ‘heinous’ IRA murders of the Troubles, the PSNI says the investigation remains open.

On April 7, 1981, mother-of-one Joanne Mathers was shot dead by an IRA gunman as she helped a resident to fill in a census form at a house in Anderson Crescent.

The honours graduate had given up her work in town planning to raise her son who was two-years-old at the time.

She took on a part-time census job to earn some money.

While standing at a doorway in the Gobnascale area, a masked man ran up to her, snatched the clipboard she was holding with one hand, put a gun to her head with the other and fired.

The victim cried out and ran past the homeowner into the property.

As the householder tried to slam the door shut, the killer rammed through waving his gun and grabbed the census forms before making off.

The killing took place as republicans, against a background of the H-Block hunger strike, boycotted the 1981 census.

It was claimed that forms were being used as intelligence gathering material by state agencies.

Collectors were robbed at gunpoint in places including Derry, Strabane, Cookstown and Omagh.

The IRA and INLA both denied responsibility for the murder of Joanne Mathers, saying it was an attempt to discredit the election of hunger striker Bobby Sands.

The RUC said the same gun used to carry out the murder was used by the IRA in two punishment shootings.

Over the years Joanne’s husband Lowry and son Shane (pictured with his mother below) have called for the perpetrators to be brought to justice. 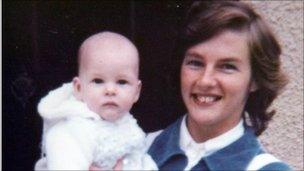 The family did not wish to make any further comment at this time.

The Derry News asked the police for an update on its investigation and questioned why nobody has ever been prosecuted for the murder.

In response, a PSNI spokesperson said: “The case is open and remains within the caseload of Legacy Investigation Branch for future review.”

The Legacy Investigation Branch (LIB) was formed in January 2015 as a component part of the Chief Constable’s response to his statutory responsibilities regarding the past.

LIB’s role is primarily to investigate homicide and security forces related deaths arising from the ‘Troubles’ between 1969 and 2004.

Those who knew Joanne Mathers described her as ‘unassuming’ and ‘one of the most decent people you could meet, who saw the good in everyone’.

Maureen Hetherington, Director of The Junction in Derry, has devoted herself to peace-building and reconciliation between divided communities in the North.

Recalling the ‘senseless’ murder of Joanne Mathers, she said: “Joanne Mathers was sentenced to death for collecting census papers and all the words of condemnation of the killers, or justification of her death by the killers, won't bring her back to her husband and son, family and friends.

“There will always be an empty chair at the table, a missing presence of love at every celebration, every birthday, every holiday, every Christmas, every day... such are the devastating consequences of a senseless and violent act against a young, vulnerable, defenceless woman.”

DUP MP Gregory Campbell, who previously backed calls for a fresh investigation into the murder, said the victim’s family were given a life sentence while the killers roamed free.

“Joanne Mathers was carrying out this task and was singled out as an innocent victim and brutally gunned down in cold blood.

“The Provisional IRA were responsible for the attack but no one has ever been convicted of her murder.

“The added irony now is that last month people all across Northern Ireland were asked to complete their census forms safely and many will have done so online, 40 years ago in 1981 it was done door to door and a young innocent woman was gunned down while carrying out the task.

“A close relative of Joanne's told me recently that the guilty people haven't served any of the life sentence they deserve, but the family were still serving theirs.”

He continued: “Like numerous other vicious killings no one has been made amenable for her murder, on a number of occasions I questioned the late Martin McGuinness about his time as the 2IC of the Provisional IRA in Londonderry regarding murders carried out by that unit during his time in charge, this included the murder of Joanne Mathers.

“On every single occasion I confronted him about what part he played in or what knowledge he had of any of these atrocities, his answer was always the same, he knew nothing and approved nothing.

“Most people could see through the brazen denials for what they were.

“As we try and build a better future for all our people, we cannot and must not forget the past, lest there be those who would take refuge in trying to repeat it."

Sinn Féin was given the opportunity to respond to allegations made against Martin McGuinness.

Meanwhile, SDLP leader Colum Eastwood offered his support to the Mathers family in their quest for justice.

He commented: “This was a heinous act that came to epitomise the futility of the Provisional IRA's actions when innocent people doing their jobs were considered legitimate targets’.

“Joanne was a young mother carrying out her role as a census worker and was murdered by someone who has evaded justice for 40 years.

“It's crucial that Joanne's family can finally get justice.

“The SDLP will support all efforts to help Joanne's family get the answers and justice they deserve.”