‘How many people in that grave have the right names?’ 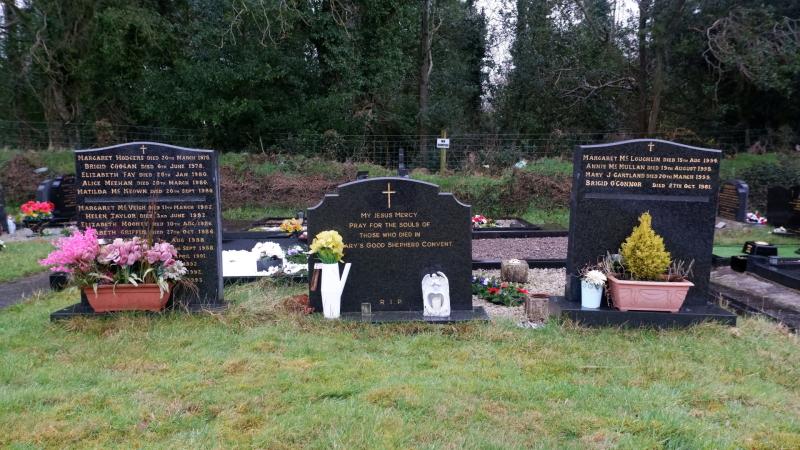 Bridget O’Connor was the sixth of nineteen laundry women to be buried in a communal grave at Ardmore Cemetery.

More importantly, she was a mother to four children.

But because she was not married those children were taken away from her.

As penance she worked ‘slavishly’ in Derry’s Good Shepherd Home and Laundry for the next 25 years, according to her son Robert.

He sought answers in the 1970s but the nuns who brought him up dismissed those approaches telling him ‘you don’t need to know anything’.

As a young boy those same nuns branded his mother a ‘mortal sinner’ while ordering him to clean toilets at St Joseph’s Home – better known as Termonbacca.

He learned nothing more of her whereabouts.

Out of the blue, Mr O’Connor received a phone call in October 1981 informing him that Bridget had died.

A short time later he located a communal grave at Ardmore but his mother’s name did not appear on the headstone.

After 25 years of service in the convent, the Catholic Church had organised her burial but somehow the wrong surname, Conway, was etched on the gravestone.

This week, at Ardmore Cemetery with an umbrella in hand to shield him from the elements, Mr O’Connor walks to Bridget’s graveside.

“My mother was buried under a false name so it makes me wonder are any of these names correct?” he ponders, “or has the Catholic Church intentionally been putting the wrong names on these headstones so that family members can’t find these women?”

When asked to correct the error the Catholic diocese refused saying it would be ‘too expensive’.

Holding letters from the Church, he adds: “I found them very defensive, they didn’t want to know really.

“They failed my mother in death as they failed her in life.”

After legal proceedings were initiated the Church decided to act.

He points to the gravestone (below) where the wrong name was crudely removed. 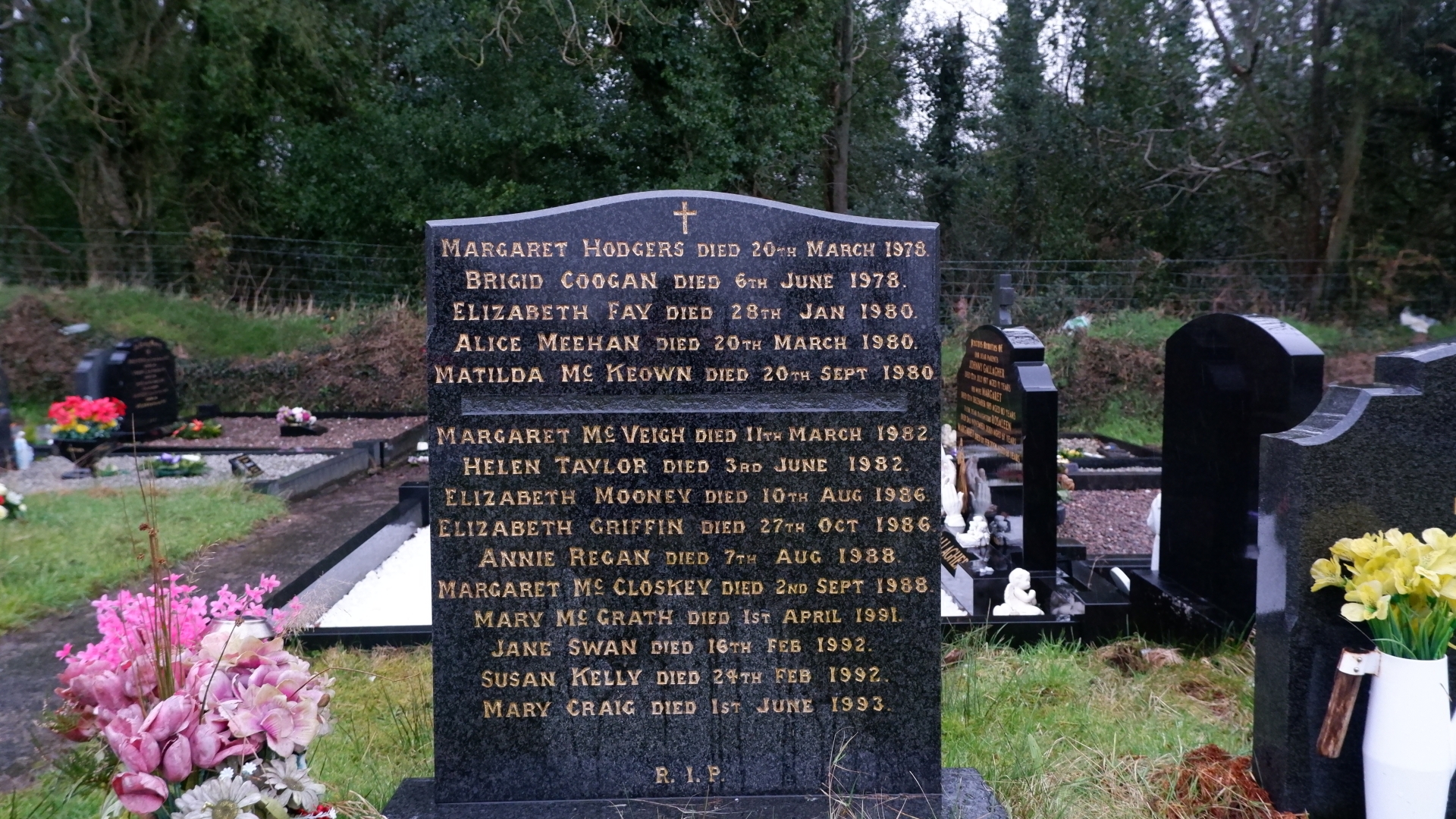 The correct name was then added to the bottom of an adjacent headstone, upsetting the chronology of the women’s deaths in the process. 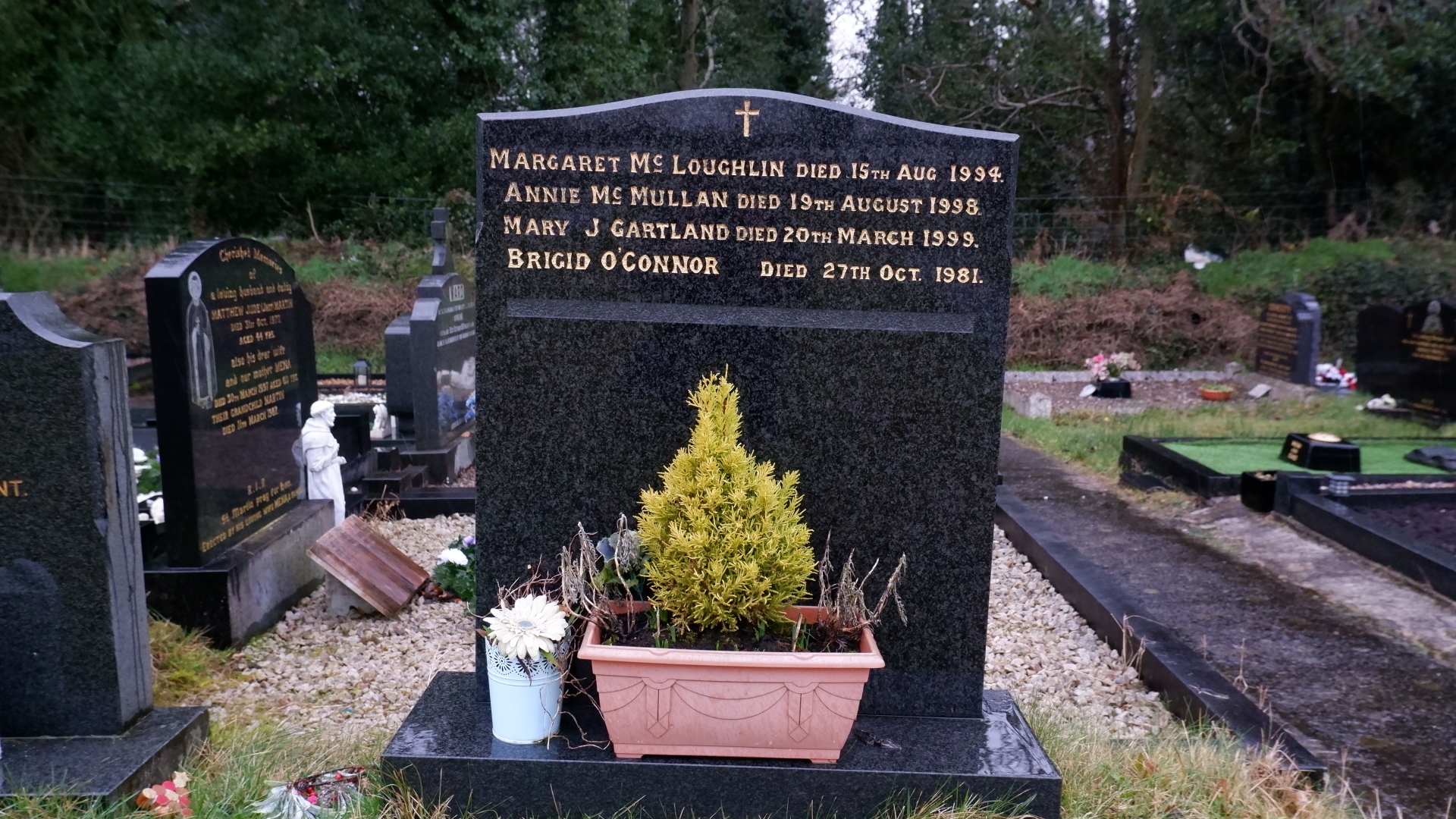 However, confusion remains over the spelling of her first name.  On the headstone it is ‘Brigid’ but in correspondence from the Good Shepherd Sisters it was spelled Bridget.

It demonstrates how little information the family were given but Mr O’Connor believes the accurate spelling is Bridget.

In contrast to the modest grave containing the 19 residents, more opulent headstones were erected in the cemetery to remember nuns who ran the Good Shepherd laundry.

Mr O’Connor was the youngest of Bridget’s children and she became resident within the walls of the St Mary’s home following his birth.

Along with his siblings, he was raised in a children’s home and feels that his status as the child of a Good Shepherd laundry woman led to his poor treatment in the home. 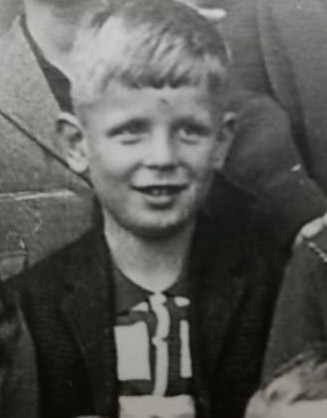 was assigned in the home.

Furthermore, during his childhood he was not informed that he had two brothers and a sister.

In 1977, as a young adult arranging his marriage, he applied for his birth certificate and began to ask questions about his mother.

His inquiries were disregarded by the nuns.

At the time Robert and his wife Kathleen assumed his mother was dead but she didn't pass away until four years later.

With sadness and regret, Mrs O’Connor says: “She could've been at the wedding, she could have met her first grandchild before she passed away.”

She points out that in death they were treated with the same contempt.

“These women were made to wash the priest’s garments because that's what they thought of these women, that they were dirt, the fallen women who were only good for doing their laundry.”

Mr O’Connor adds: “My mother worked in a laundry from the day I was born to the day she died.  That’s what’s so annoying about it.  She could have been helped, she needed help and they didn’t help her.

“The only people who seemed to be benefitting was the nuns through the labour of the women, rather than helping them to get on their feet.

“I don’t know how you explain it, whether Social Services could’ve established them in the community and get them more confidence to run their own lives.”

Once again Mr O’Connor wrote to the Good Shepherd Nuns to request information.

He was told that she may have been referred to St. Mary’s Good Shepherd by Limavady Hospital in September 1956 but that there was ‘no solid information in relation to this’.

None of the Sisters who were in St. Mary’s when she was referred are now alive, it added.

The solicitor acting on behalf of the Good Shepherd Sisters went on to say that the home was run for ‘older girls and women who had fallen into difficulties and often had nowhere else to go’.

“They said she could leave any time she wanted, but how could she with four children taken from her and no home of her own,” he said in response.

The Mother and Baby Homes research report published last week pointed out that the Good Shepherd Sisters closely guard the secrets and privacy of the women who passed through their mother and baby homes and laundries.

In some respects this is commendable and it is clear that this is the wish of most women involved, the report said, but it is also the cause of distress to their families.

In this case, as a result of the inadequate levels of communication about his mother, Mr O’Connor has been left to speculate about her life and how she came to enter the laundry.

He is convinced the nuns did not want the family to find Bridget.

“I’m just assuming that we weren’t allowed to be adopted, because she would not sign, and that’s why she was kept in there.

“I can’t say that for a fact but that’s what I truly believe.”

In reply nuns informed him that his mother was a ‘very happy and pleasant lady’ who made St. Mary’s her home and ‘at no point ever expressed a desire to leave’.

They added that she was not there on foot of a court order.

He found that difficult to comprehend as it made him feel like ‘she didn’t want me, and she was happy to be in there’.

However, he is distrustful of this information and unwilling to accept it at face value.

Moreover, a barrister told him that his mother might have thought it was necessary to work in the laundry to pay for the upkeep of her children in their Catholic residential homes.

Mr O’Connor reflected on the impact his mother’s disappearance on his life and how the lack of communication from the Good Shepherd Sisters compounded his trauma.

Many questions remain unanswered for him: “Why she was in there so long? What did they do to help her? Was it just for the benefit of the nuns to get free work…”