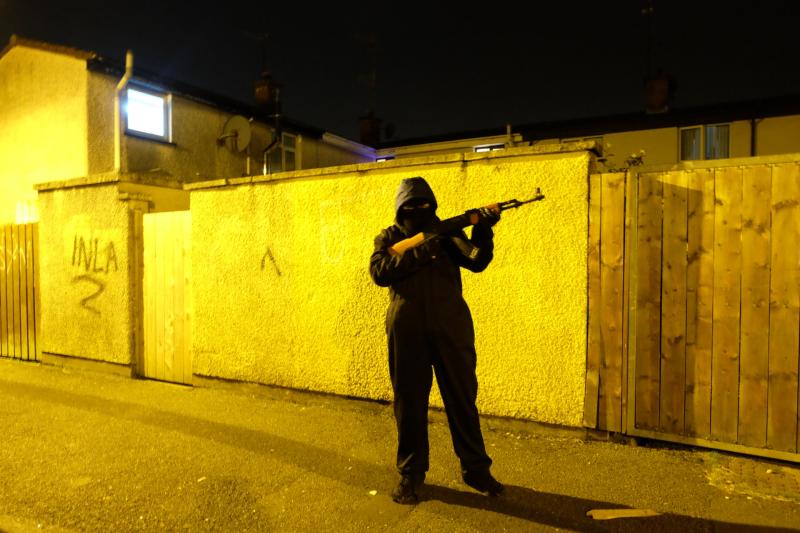 Police in Derry have launched an investigation after an image emerged of a masked gunman in the Bogside.

The individual is seen brandishing a high-powered assault weapon in an alleyway off Drumcliff Avenue.

It was captured around midnight on August 15 in the aftermath of the Meenan Square bonfire.

There have been unconfirmed reports that a volley of shots was fired on the night.

A couple visiting from Belfast said they were convinced they heard shots.

The pair, who are originally from Derry, were staying in a city centre hotel and watched the bonfire from the City Walls.

The man who did not wish to be named said: "Growing up as a teenager in Derry I got to know what gunfire sounds like.  There were definitely gun shots.  They were definitely not fireworks."

Video footage has since circulated online in which a series of loud bangs can be heard,  appearing to corroborate that account.

Mr Holstein told the Derry News that he arrived in Ireland over a week ago with plans to attend anti-internment bonfires in Belfast before travelling to Derry for the annual Meenan Square pyre.

“The majority of people want to move forward for a better future for all our children but will we ever with masked men still in the shadows,” he added.

need to be clear about what action they are taking.

He said: “These disgusting displays have no place in our society.”

Dissident republican party Saoradh said it had no response regarding images or reports of a suspected armed man in the Bogside.

They were however critical of the PSNI for arresting party members on Tuesday.

Meanwhile, Detective Chief Inspector Dunny McCubbin stated: “Police are aware of a video posted on social media and we are making enquiries.

“We are also aware of an image published in the media earlier this week showing a masked individual holding a suspected firearm. The image was reportedly taken in Derry over the last week.

“We would appeal to anyone who has information about this to call detectives at Strand Road on 101.

“You can also submit a report online using our non-emergency reporting form via http://www.psni.police.uk/makeareport/.

“You can also contact Crimestoppers anonymously on 0800 555 111 or online at http://crimestoppers-uk.org/”