'It’s a 50/50 question, more so this year with the Coronavirus about whether we will survive' 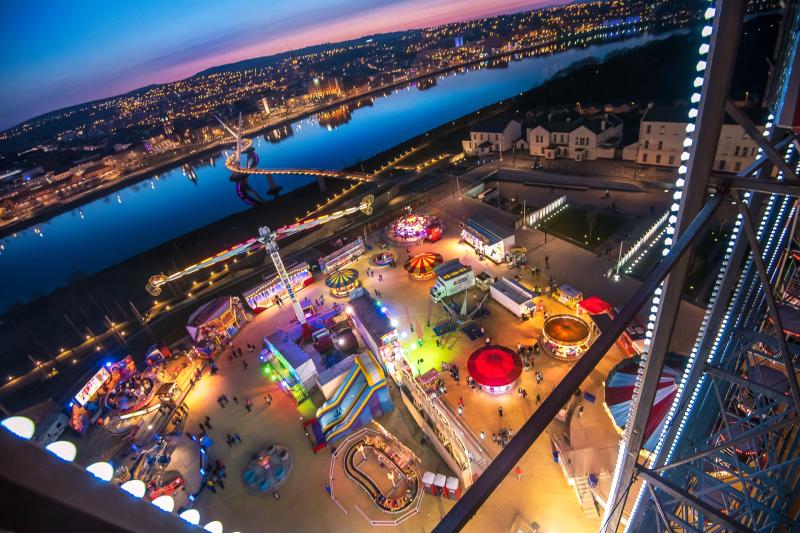 The financial impact of the Coronvirus pandemic has put at risk the survival of a 160-year-old family run business.

No business has been immune to the adverse effects of the coronavirus and subsequent lockdown, but the very existence of travelling funfairs and circuses are believed to be under threat in Ireland.

Unlike most businesses who can lift the shutters once permission is granted, for Cullens Funfair it takes months of planning and site meetings with health and safety officers to obtain a council site.

Some councils have safety advisory groups which they must meet weeks ahead of a planned event.

Cullens Funfair is a well-established business which dates back to 1860 or before.

It has passed through seven generations of the family.

Their journey is one from humble beginnings when it consisted of manually operated rides such as swing boats, along with a few stalls and a dodgem track.

These were transported around the country with the use of horses.

The business has grown to become the largest travelling fair in Ireland and large modern vehicles are used nowadays to haul over 1,200 tonnes of equipment.

Cullens has been based in Derry since 1945 and is currently situated on the Limavady Road.

Joe Cullen, one of four brothers who are partners in the business, said a typical season starts in March when they go to Newry for St. Patrick’s week festival then back to Derry for Easter at Ebrington.

Approximately 70% of events are held in the North and the remainder in the Republic of Ireland.

They then move on to, amongst other destinations, Enniskillen, Lisburn for the Balmoral Show, Ballyclare and Carrickfergus Classic Sail.

In the second half of the year they’d travel to Ballycastle for the Auld Lammas Fair, could have equipment at the National Ploughing Championships in September and Ballinasloe Horse Fair in Galway in October.

However, due to Coronavirus all of these events have been officially cancelled this year.

Money has already been spent on machinery, public liability insurance and engineers who test the equipment.

Cullens can’t cancel those insurance contracts for fear that they wouldn’t be approved next year as a limited number of companies offer that type of cover.

A risk assessment has also been carried out so that measures can be implemented in the event the business is allowed to reopen later this year.

The funfair was given the go-ahead to set-up in Newry prior to St Patrick’s Day.

Rides were built, licenses issued by the council and customers queued outside when the plug was pulled at the last minute.

Joe explained: “We had the expense of travelling the whole way to Newry with over 30 vehicles, staff, living accommodation, equipment, putting it up and getting the last of our test certificates completed with the equipment up.

“We were ready to open and had to take it down and bring it back home.”

There are no events left this year other than ‘private business’ where they book a site and advertise it rather than working in conjunction with a council.  It leaves little room for profit.

Cullens has received £10,000 worth of support from the government and rates relief but it is nowhere near enough to cover their costs.

“That money wouldn’t last a month and there’s nothing else in the kitty,” Joe said.

When asked if he is hopeful about the future of the business Joe referred to a BBC documentary made about the family last year which looked at their unique way of life and explored whether it’s in danger of becoming extinct or if the next generation of Cullens can keep the family tradition alive.

He added: “It’s a 50/50 question, more so this year with the Coronavirus about whether we will survive.

“Not only us, but our business in general, we are one of the bigger operators but some of the smaller men can’t afford to do it.

“I know two or three already who have thrown in the towel, they just can’t pay the insurance and expenses and they’re selling equipment.

“That’s because of the coronavirus, if they’d been out earning and covering expenses, and putting money aside for the winter they’d be fine.

“And the circuses are in the same boat.”

He does remain hopeful that the next generation will carry on the legacy and said ‘your heart and soul has to be in the funfair business’.

The next generation were committed to its future pre-Coronavirus but Joe said it’s a question that will have to be asked again at the end of the summer.

“I would surmise so, some of the younger generation are very dedicated and they would still be in the sheds right now working on the machines doing painting and cosmetics,” he added.

When the green light will be granted to get back on the road is ‘the million-dollar question’, Joe said.

It will not be until phase 5 in the governments’ roadmap/steps to recovery both North and South.

In the Republic of Ireland that is anticipated to be on August 10 but no date has been published in Northern Ireland.

Cullens are therefore eyeing a return in mid-August but it would only be private business events at this stage.  Their sights are already set on rebuilding next year.

Joe said numbers attending can be managed and social distancing controlled on all rides bar one which would stay closed.

Seats and bars would be cleaned after each ride and hand sanitisers provided for customers.

Joe concluded: “If the South opens earlier than the North or vice versa, that is where we will aim to set-up.”