Good Samaritan also attacked when he came to the victim's aid 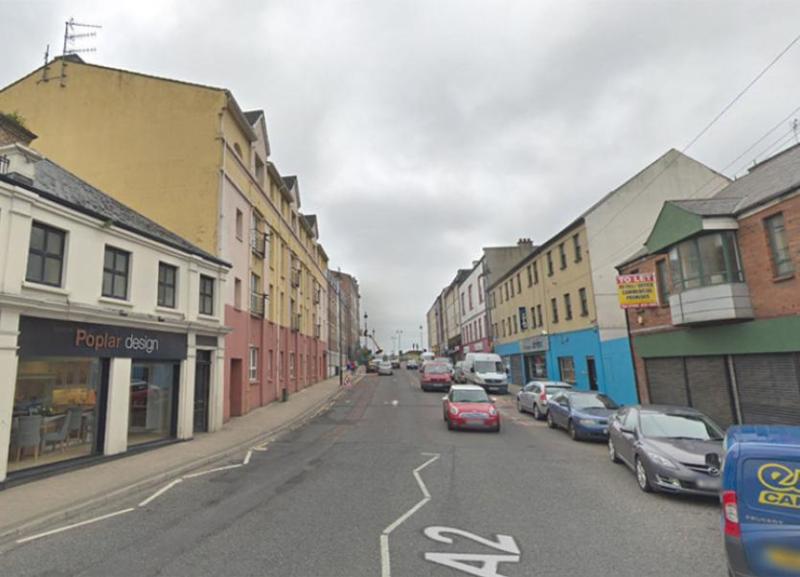 The attack took place at John Street on Wednesday morning.

A man described as 'a violent thug' has been remanded in custody charged with robbery and assault on a man and a Good Samaritan who came to his assistance.
Damian McMahon, 30, of Moore Street in the city, appeared at Derry Magistrates Court charged with robbing a man of a rucksack including a mobile phone and a wallet, inflicting grievous bodily harm with intent on the victim, possessing drugs and fraud by false representation bu use of a credit card.
McMahon was also charged with assaulting another man, all of which were said to have occurred on Wednesday morning.
He was also charged with entering two premises in the Antrim Road in Belfast with intent to steal on dates between January 5 and January 8, 2019.
A police officer connected McMahon to the charges and opposed bail.
He told the court that police were called to John Street over a suspected robbery and found a man with injuries who was bleeding heavily.
The alleged victim had left a local bar and walked towards nearby apartments and McMahon was said to have blocked his way and proceeded to assault the man.
A member of the public, Michael Pettifer, came to the man's assistance and was also assaulted.
The alleged victim was kicked in the head and left unconscious on the ground and his rucksack was taken.
The officer told the court the incident was captured on CCTV and showed the man being kicked again on the head.
The injured man was taken to Altnagelvin Hospital and found to have two fractures to the jaw, a broken eye socket, a suspected broken nose and he had lost two teeth.
The defendant was then seen in William Street and was tracked by CCTV and seen using a stolen card to buy cigarettes.
When police stopped him, McMahon was said to have found the injured man's phone on him.
During the first two interviews, McMahon made no comment but at the third interview after being shown CCTV he made full admissions.
He told police he was 'blocked' and didn't know what he was doing and was 'disgusted' by his behaviour.
The officer also referred to the two charges of burglary from Belfast and said blood and fingerprints had been found at the scenes in a beauty salon and a dentist on the Antrim Road.
Police opposed bail stating that McMahon had no suitable address and had 36 previous convictions 12 of which were for burglary, five for assault and one for a serious assault.
The officer said McMahon had 'a propensity for violence'.
He added that police had reports that three masked men had called at the Moore Street address last night
Defence solicitor, Paddy MacDermott, said the proposed address was his mother's and the issue of the masked men had been resolved.
He said McMahon had made full admissions so there was no question of interfering with witnesses.
The solicitor said everything had been caught on CCTV and McMahon showed 'remorse for his involvement'.
District Judge Barney McElholm said 'anyone inflicting this sort of damage on someone should not be breathing the same air as the rest of us.'
He said McMahon was 'a violent thug' and totally unsuitable for bail.
He remanded him in custody to appear again on February 13.
Immediately after McMahon's appearance the Good Samaritan in that case, Michael Pettifer, appeared charged with assaulting a member of staff at the Methodist Mission in Crawford Square some hours after the original incident.
Pettifer, 31, of no fixed abode admitted a charge of assault on Wednesday.
The court was told that police were called to the Methodist Mission at 4am to reports of an incident involving Pettifer and another man causing a disturbance.
The other man was being aggressive towards staff and Pettifer said 'you have upset my friend I will go over that hatch and kill you.'
Defence solicitor Seamus Quigley said that after the earlier incident Pettifer 'had let himself down badly.'
Judge McElholm said he would take account of the earlier incident and fined the defendant £150.