“I would urge parents in the area to talk to their children to say that this is wrong, this is dangerous and that they are dicing with death.” Sinn Fein councillor for the Creggan area, Tina Burke, warning of the dangers of young people climbing onto the roofs of buildings in the area. 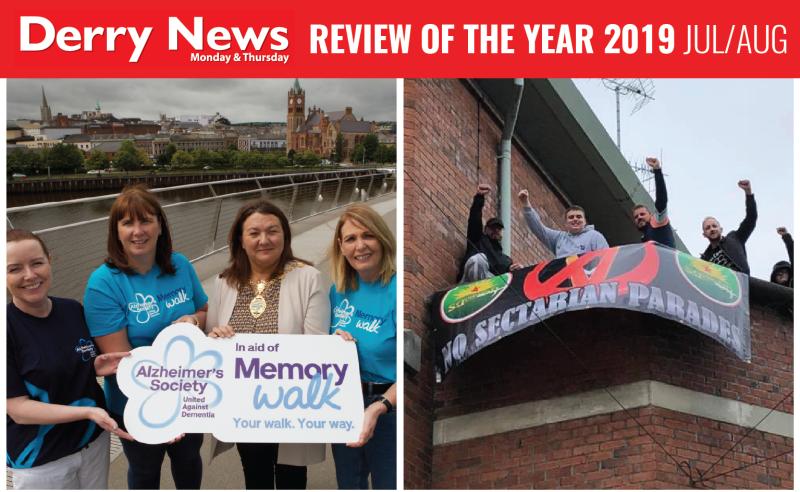 Quick-thinking mum saves life of three-year-old
A quick-thinking Derry mother described the moment she save her three-year-old daughter's life when she began choking on a lollipop.
Fianait Gallagher's daughter, Clodagh, started to foam at the mouth and turn grey after the sweet broke off the stick and lodged in her throat.
The little girl was highly distressed and struggling to breath but luckily Fianait, who trained in paediatric first aid, knew how to remove the obstacle.
“I was standing doing the dishes after dinner and heard this weird noise behind me. I turned around and Clodagh was holding her throat and starting to panic.
“Thank God I had done my paediatric first aid and straight away I started slapping between her should blades but nothing happened. I looked in her mouth and she was starting to foam and go grey.
“It took the Heimlich manoeuvre at least three times and loads of vomit to clear it.”

Devenny family speak of RUC assault 50 years on
The family of the Derry man widely regarded to be one of the fist victims of the Troubles marked the 50th anniversary of his death with a special anniversary Mass in St Eugene's Cathedral.
Sammy Devenny died on 17 July, 1969, three months after a squad of RUC men burst through the front door of their William Street home and severely assaulted him, a number of his children and others present in the house.
Daughter Christine was just nine-years-old when the attack took place. Speaking on the 60th anniversary of her father's death, she said: “Over the years, obviously what happened affected ys greatly. There are nine of us and all of us have different views about it.
“The older ones in the family witnessed the whole thing.”

Mass times reviewed due to 'priest shorage'
A Derry parish launched an extensive online survey due to what was described as “the current shortage of priests it may have to review the frequency and times of Mases.”
Parishioners in the Waterside and Strathfoyle parish, which takes in St Columb's Church, St Mary's Oratory, St Oliver Plunkett Church and the Church of the Immaculate Conception, were asked to complete a questionnaire on the parish website.
It stated there were 13 Masses between 6.00pm on a Saturday to 12.30pm on a Sunday within a three-and-a-half mile radius of St Columb's Church on Chapel Road.
The survey was aimed at finding out what community support the parish should priorities such as home visits, sacramental preparation and addictions.

UUP councillor suspended
An Ulster Unionist councillor on Derry City and Strabane District Council was suspended from the local authority following three convictions for driving under the influence of alcohol.
The Local Government Commissioner for Standards deemed that the 15th-month suspension of Alderman Derek Hussey would take effect from 16 July.
Acting Commissioner, Ian Gordon, adjudicated the UUP representative – who had ignored calls to resign – had breached Paragraph 4.2 of the Local Government Code of Conduct for Councillors.
The investigation into Alderman Hussey's conduct was launched after the Commission received two complaints that he had breached the local authority code of conduct

Residents 'up in arms' over proposed housing development
A group of residents in the Waterside received assurances from Derry City and Strabane District Council that their opinions would be heard over objections they had made about a proposed construction project ontheir doorsteps.
Residents of Waterfoot Park took the Council to task on several points over plans to erect four semi-detached houses, two detached houses and six apartments.
The objectors told the Derry News that should the development proceed, they would lose privacy due to the "overbearing dominance" of the new dwellings.

Children 'dicing with death'
Parents in the Creggan area of Derry were called on to warn their children of the dangers of climbing on to roof buildings.
The appeal came from Sinn Fein councillor for the area, Tina Burke, who was speaking after several young people were spotted climbing onto the roof ot he Old Library Trust building on Central Drive.
Cllr Burke said she had been contacted by a number of concerned residents after they were shocked to see young people climbing onto the roof the building.
She said: “It is a very dangerous act these young people are involved in and that's why I would urge parents in the area to talk to their children to say that this is wrong, this is dangerous and that they are dicing with death.”

Historic 'Kennedy flag' donated to Foyle College
An American flag last flown at the former American naval base in Derry on the day US President John F Kennedy was assassinated was donated to Foyle College as part of a new memorial to former base.
The new college was built on the site of the former naval communications station on Limavady Road in the Waterside area of the city.
The original flag pole from the base had been restored and re-erected to commemroate all the US Navy sailors who served there.
A plaque detailing the novalhistory of the site was unveiled at a special ceremony attended by US Consul General, Elizabeth Kennedy Trudeau, local Mayor Councillor Michaela Boyle and members of the “United States Naval Communications Station Londonderry Northern Ireland Alumni Association” which raised over £10,000 for the restoration of the flag pole and the erection of the plaque, marking 35 years of the base in the city.

Springtown Camp monument unveiled
A monument commemorating Derry's Springtown Camp was unveiled at a special ceremony.
Several hundred people, including former camp residents, attended the unveiling which took place next to the North West Regional College Training Centre at the entrance to Springtown Industrial Estate which stands on the site of the camp.
The unveiling was followed by a civic reception in the Guildhall.
The art installation is in the form of a Nissan hut in which the inhabitants of the camp were house in deplorable conditions because of the policy of housing discrimination in operation at the time against the Catholic community. 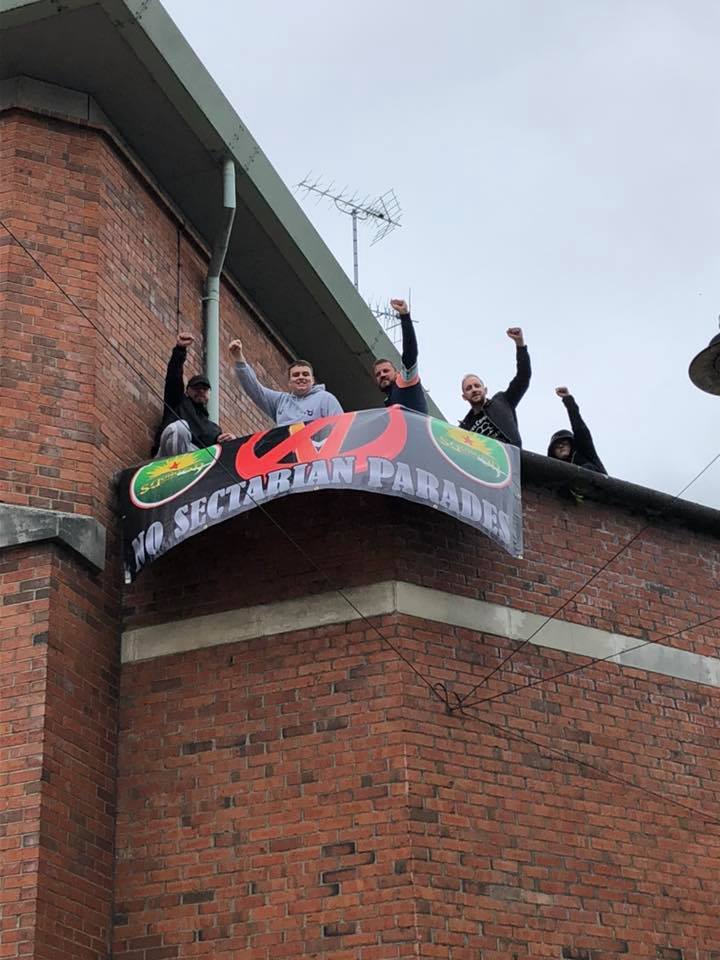 Anger at loyalist band support for 'Soldier F'
Bloody Sunday families sought a meeting with the Apprentice Boys of Derry after a band wore uniforms in support of the British soldier facing prosecution over the 1972 atrocity.
Members of the Clydvalley Flute Band, from Larne, wore a Parachute Regiment symbol with the letter “F” on their shirts during the annuall Apprentice Boys parade in the city.
East Derry Westminsiter MP Gregory Campbell and his DUP colleagues in the city also faced criticism after they were pictured standing under a Parachute Regiment banner in the Fountain Estate prior to the parade taking place.
Following the parade, several days of disorder followed in the Bogside with petrol bombs being thrown at the Apprentice Boys Memorial Hall close to the city's historic walls.
“Soldier F,” a former lance corporal in the Parachute Regiment, is being prosecuted for the alleged murder to two of those shot dead on Bloody Sunday, James Wray and William Nash.
He is also facing prosecution with the attempted murders of Joseph Friel, Michael Quinn, Joe Mahon and Patrick O'Donnell who were wounded on the day.