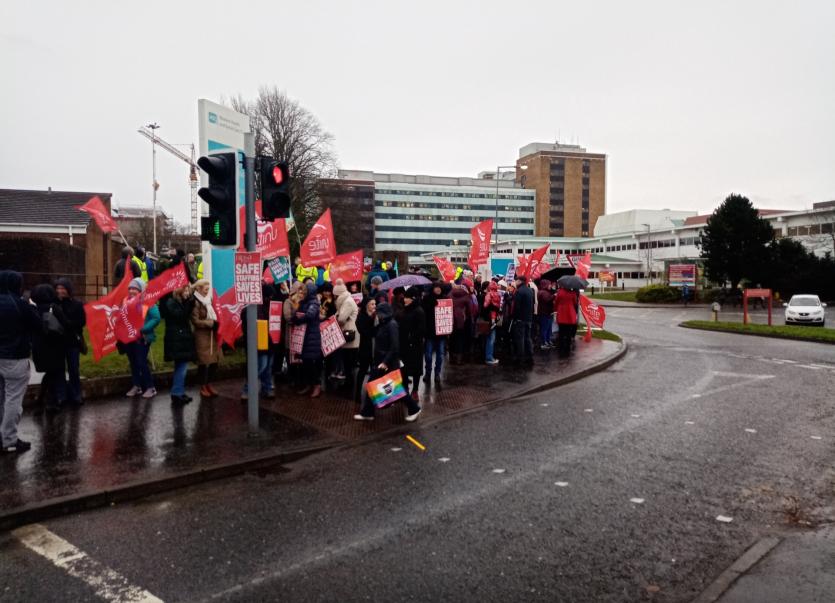 Picket lines were in place across Derry yesterday as Health and Social Care workers demanded safe staffing levels and pay parity with the rest of the UK.
Strike action proceeded as planned after last-minute talks between NI’s five main parties failed to provide a solution as their calls for Secretary of State Julian Smith to intervene and restore pay parity went unanswered. The Northern Ireland Office has insisted it is a devolved matter.
Yesterday, outside Altnagelvin, members of the Royal College of Nursing (RCN), UNISON, UNITE and NIPSA could all be seen holding flags and placards.
There were also pickets in place at Gransha Hospital, Shantallow Health Centre, Riverview House and elsewhere.
The constant honking of horns from passing vehicles at Altnagelvin highlighted the depth of public feeling for health workers from within the local community.
Workers throughout the Derry hospital took action including nursing staff, support services and paramedics.
It is the first time in 103 years that RCN members have decided to take strike action.
Speaking at a cold picket line yesterday morning, RCN Board Member and local nurse, Andrew Doherty, said it is a decision that “wasn’t taken lightly”.
New data has shown that Northern Ireland is the only country in the UK to lose nurses between April and September of this year.
Mr Doherty said that across the province there is a shortage of around 2,500 nurses. And brand new band 5 nurses here are paid about £2,000 less than their counterparts in the rest of the UK, he added.
“That’s why we have difficulty retaining staff, they just leave and move elsewhere. The staff we do have feel undervalued and underpaid, and we’re at the point where we’re in crisis and the decision had to be taken.”
At the time of writing, in the Western Trust area 582 outpatient appointments were postponed and 34 planned inpatient and day case procedures were cancelled from Tuesday until today, December 19. “On this day our services will be focused on providing emergency services for patients in our hospitals and those at highest risk within our communities,” a spokesperson said.
Lots of other services were stood down entirely such as non-emergency children’s services, community services and 7 family centres.
Mr Doherty insisted however that patient safety has been maintained throughout strike action. “Services are at a minimum, but a safe minimum, wards are down to a Christmas day type rota.”
The situation was monitored during the day, and immediately after speaking to the Derry News, he walked around the wards to ensure staff levels were safe.
“We have been warning the Department of Health for years that this perfect storm was coming, that they weren’t recruiting enough staff and patients are getting more and more unwell, with complex needs,” he continued.
“All we’re asking for is the same pay as England, Scotland and Wales, it’s not a massive deal, it’s only what we’re entitled to and we’re disappointed there has been progress in these talks with the Secretary of State.”
It emerged on Tuesday night that Secretary of State Julian Smith failed to meet parties despite an arrangement being in place. “For nurses on the picket line this morning it is just another smack in the face, we already are undervalued and underpaid and now it seems like the SoS doesn’t value us either.”
Ciaran McDermott, Control Room Officer with the Ambulance Service, said staff are under “stress” and are waiting for politicians to give them an answer. “We’re all disappointed for sure,” he added.

Meanwhile, Liam Gallagher of UNITE also stood with workers at Altnagelvin yesterday. The trade union represents technicians, catering staff, some paramedics, lab technicians and cleaners.
“Thousands of NHS staff in NI are out today. They have pretty rationally argued since 2008 for pay parity with their colleagues in England. They’re not looking for the moon, they’re looking for something that is reasonable and they have been constantly told there will be a 1% cap on anyone who is receiving incremental pay.”
He said that while the withdrawal of labour, skills and expertise during yesterday’s strike would impact on patients, that throughout the year lives are being put at “serious risk”.
“For example there is a six year waiting list for hip replacements, a lengthy waiting list for cataract surgery, people are dying on waiting lists.
“The health service in Northern Ireland at present is on life support.”
Political representatives are involved in a “blame game” over the issue of pay parity, he said, but the message has been delivered that they need to “get back to work” to sort out the “health service and education system”. Mr Gallagher believes parties will be punished in any forthcoming election if they don’t find a resolution.
The Bengoa Report, which is a blueprint for improving the NI Health Service, will have to be implemented in order to reform health and social care.

Derry Trades Union Council Chairman, Niall McCarroll, said DTUC stands in unity and solidarity with all workers across Derry as they take “radical action” which has mobilised the entire trade union movement.
“It will only be through workers agitating and mobilising that anything will be achieved, history has told us that. History also tells us that the political classes have done nothing for workers unless militant force and radical action is used.
“Politicians continue to prop up the establishment and continually regard workers and working class communities with contempt, not worthy. The trade union movement will always be the voice of the worker and the guardians of working class communities.”
Further strike action is planned for January, February and March.