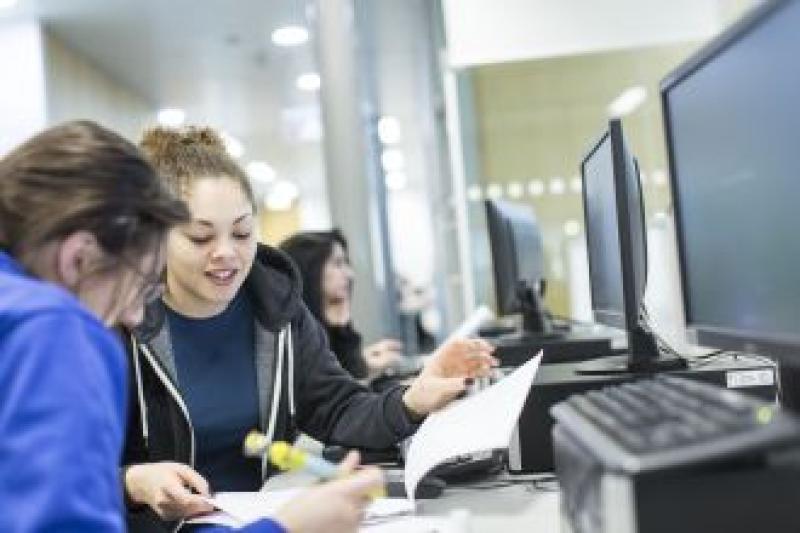 Students making use of computer facilities at Magee

Students at Ulster University’s Coleraine and Belfast campuses have over 8 times as many 24-hour computers available to them in comparison to those studying at Magee.

The Derry News last week reported that the number of 24-hour computers at the Magee Campus in Derry has been reduced from 100 to 20 for the 2019/20 academic year.

Records reveal there are 171 workstations available at Coleraine on a 24-hour basis in its library.

Meanwhile, UU’s Belfast campus has 174 computers and Jordanstown has 105 24-hour computers with an additional 412 on offer until 10pm in its library.

The 80% reduction in computers at Magee has been problematic for students with no computer or internet access at home and those in employment who must find time in the evenings and later at night to work on assignments.

Ulster University says a decision was taken to reduce the number of 24-hour computers at Magee based on analysis of out-of-hours usage.

However, a number of students studying at the Derry Campus have complained that every time they go to use one of the 24-hour computers none are available.

Vice President of the Students’ Union at Magee, Collette Cassidy, confirmed that she had been made aware of the issue by students and has relayed these concerns to relevant staff at the university with a view to finding a solution.

People Before Profit Cllr Shaun Harkin has called on Ulster University to reverse its decision on Magee computer provision.

"Students at Magee have contacted People Before Profit about the reduction of 24-hour computer facilities at Magee. They have been cut from 100 to 20. This means students can't access computers when they need one and the situation will become much worse during exams.

“No such cut has taken place in Coleraine or Belfast. The Coleraine campus has over 170 24-hour computer facilities. As does Belfast.

“We've just had presentations to Derry and Strabane Council from top Ulster University officials claiming they have a full commitment to expanding Magee. Many people are alarmed Ulster University is set to suck up the bulk of promised City Deal funding.

He added: “What sort of message does cutting computer access send to Magee students and people in the North West? It looks like a continuation of the treatment Ulster University and Stormont has dished out to Magee for the last sixty years.

“We shouldn't stand for it. We are working with Magee students to demand this decision be reversed immediately.

“This also means we have to once again question our trust in Ulster University's commitment to Derry and the broader region.

“This is why Derry and Strabane Council has agreed to explore all available options when it comes to the development of the type of University we deserve here. This must be followed through on."

The Derry University Group added that this confirms everything they have said about Magee being the fourth priority campus of Belfast’s second university.

A spokesperson for Ulster University commented: “Computer provision on each campus is reviewed and adapted based on student feedback and demand.”