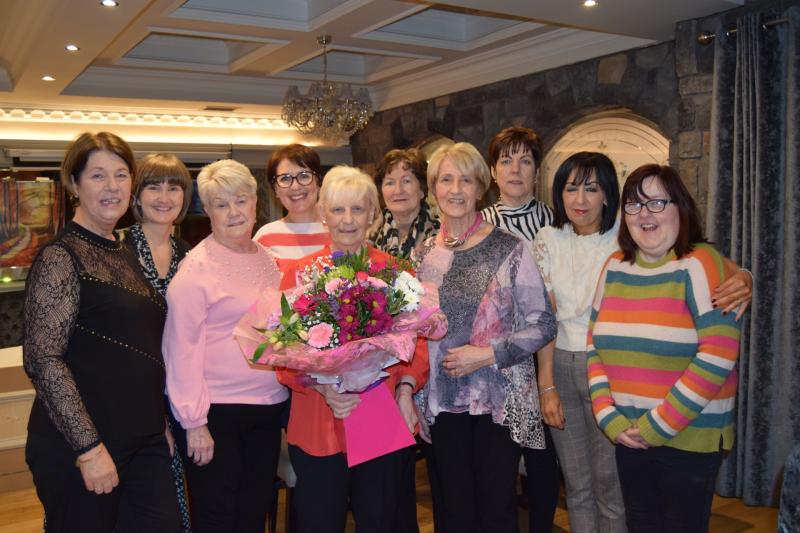 Kate with members of the Maghera Local Cancer Research Committee at a celebration morning held in her honour last week.

Kate joined the group over two decades ago and has been an active member of the committee ever since.

Nothing was ever too much for her and she always strived to raise as much money as she could to help in the fight against this devastating disease.

Kate’s support in the local committee is much appreciated by Cancer Research UK.

Praising the former councillor's help and support over the years, local fundraising manager Danielle Sheridan said: "Cancer Research UK are proud of the network of supporters they have across the country and are grateful for the selfless time and effort they give to the charity.

"Without our supporters we could not carry out the life saving work we do.

"They are the lifeline of our charity in their communities constantly spreading awareness as well as raising much needed funds."

Kate thanked the committee for their friendship and support during her time on the committee and hoped that she could still avail of that as she continues to assist them in their fundraising efforts.

Kate was one of the driving forces behind launching the Big Breakfast campaign in Maghera 19 years ago.

Alongside Violet Phillips, she organised the first ever Maghera Big Breakfast which took place in 2002 and today it is seen as the largest Big Breakfast in the UK, a fact Kate and the Maghera Local Committee are extremely proud of.

The 19th Big Breakfast will take place in Walsh’s Hotel in Maghera on Friday, March 6 from 7am to 2pm.

The Maghera Local Committee are grateful for the support of the local community, businesses and schools who come along and attend their Big Breakfast every year making their event so successful.

They are also grateful for the donations of products they receive from all the businesses both locally and further afield.

Without these donated products it wouldn’t be possible to make so much money available to Cancer Research UK.

Finally a huge thanks must go to Walsh’s Hotel as without their premises and support the Big Breakfast would not be possible.