'I think we could beat the world record again next year' 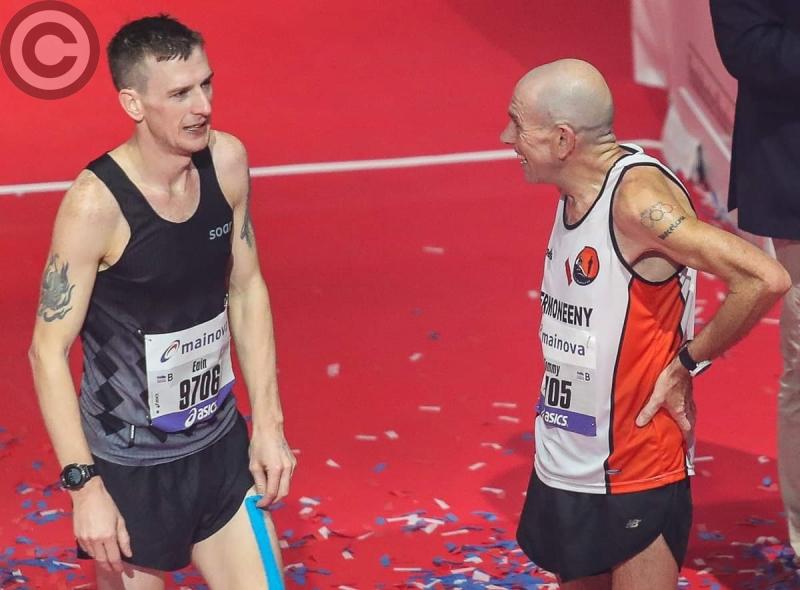 A FATHER and son running duo from Co Derry have become world record holders.
Gulladuff man Tommy Hughes (59) and son Eoin (34) smashed the official Guinness World Book of Records' time for the fastest marathon ran by a father and son at the weekend.
The pair achieved the monumental title at Sunday's Frankfurt marathon Germany.
The runners, who only recently started training together, beat the current title holders Graham and Ben Green from Stockton, England by two minutes and 50 seconds after a combined time of 4 hours 59 minutes and 22 seconds.
But it seems the world is not enough for former Olympian Tommy who yesterday told the County Derry Post he already has set his sights on a few other potential record breakers.
"Next year I am 60 so I will be trying to run under 2 hours 30 (minutes), which would be nearly a world record for a 60 year-old," he said.
"If I can keep that time up next year it will also mean that for the last five decades I've been running under 2 hours 30, which I don't think anyone has done either.
"I also think we could get the marathon world record far lower, so we'll probably go back again next year too.
"No rest for the wicked."
Eoin, a dad-of-three who lives in Maghera, added: "It's a great achievement, my dad has always been a great runner so it's great to be a part of this with him.
"I knew it was possible and we got there.
"Now are just waiting on the official confirmation, which may take a while. They have to gather evidence, like pictures from us running the course.
"The hopefully we will make it into February's book."
Eoin only took up running at the age of 31 and regularly trains with his dad who runs a whopping 120 miles a week.
Said Tommy: "It was Eoin's idea to do the world record attempt, he had a brainwave and thought it was possible because we were both in top form.
"So Eoin decided we would have a go at Frankfurt because it seemed like a fast course, and he was right."
Although it is the first time that both Tommy and Eoin have made the headlines together, it is not the first time the electrician himself has made the news for his running achievements.
The Gulladuff grandfather has competed in the 1992 Olympic Games, won the Dublin marathon, the Belfast marathon twice and was even first over the line at the Walled City marathon in 2013, aged 53.
He is also gearing up to run for Ireland in a few weeks.
"I love running and it's great to be part of the running community. I've no plans to stop any time soon. I'll be doing it for as long as I can.
"These achievements are a bonus."