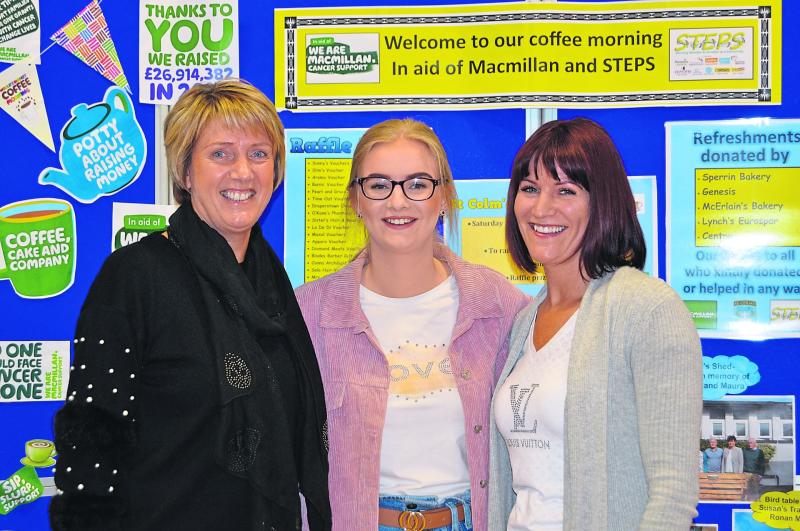 A COMMUNITY coffee morning held by a Draperstown school has raised a massive £2080 for two great causes.
The event, held on Saturday, October 12, was organised by St Colm’s High School with proceeds going to mental health group STEPS and cancer charity Macmillan.
The school has been supporting both charities for a number of years., with a Macmillan coffee morning annually for staff and pupils. In May 2018 staff participated in the Belfast Marathon and raised a phenomenal £8000 for Macmillan, in memory of their colleague and friend, Maura Mc Vey.
STEPS attended Saturday's event. The Draperstown based charity provides advice to the school on a regular basis with staff speaking to pupils at the annual 'Health and Wellbeing 'day.
Karen Mc Guigan from STEPS spoke at Saturday’s event of the bond between the charity and the school.
She informed those at the coffee morning of the work of STEPS, the services they provide, and the importance of addressing the stigma of suicide and mental health.
In 2017 a tree was planted in Susan’s Trail to celebrate the 5-year anniversary of STEPS, visually reminding visitors to the Trail that it is ‘Ok not to be OK’. Together with the Men’s Shed they help in the care and development of our biodiversity area, Susan’s Trail. These strong community links were recognised at the highest level when St Colm’s were awarded the prestigious TES Sustainable School Award in June. In the summer of 2019 the Zachary Geddis Break the Silence Trust chose Susan’s Trail as a special place to donate their beautiful bird table in memory of Ronan Mc Guigan. Ronan’s father, Malachy Mc Guigan continues to be a driving force in the care of this area.
St. Colm’s thanked all sponsors: Sperrin Bakery, Genesis, McErlain Bakery, Lynch’s Eurospar and Centra, Mrs. Mc Eldowney, and Cillian and Dáithí Quinn. They also thanked those who provided vouchers and gifts for the raffle: Sonny’s, Slim’s, Aroma, Burns&Co, Pearl and Grace, Time Out, Draperstown Chinese Takeaway, O’Kane’s Pharmacy, Sister’s Hair & Beauty, La De Di, Maxol, Apparo, Diamond Meats, Blades Barber, Conna Archibald Barbers, Solo Hair, Mrs. Donnelly and Annamarie Mullan, Ballinascreen GAC and Heron’s Chemist. The pupils who visited the sponsors were thanked for their efforts, as were staff and pupils who gave freely of their time on Saturday to ensure the success of the day.
The school was overwhelmed with the generosity of the community which resulted in £2080 being raised for these two charities.
Picture special: Pg 22-23