Wayne ensures the show goes on

The Co Derry singer says he wanted to bring a bit of joy to care home residents. 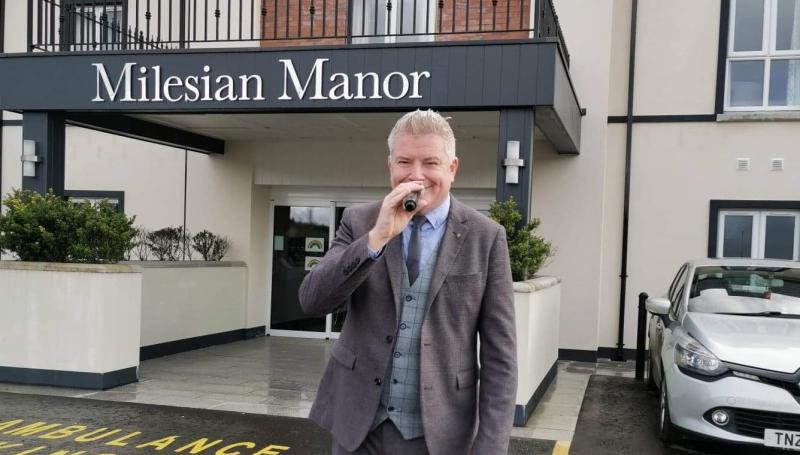 Wayne in place outside Milesian Manor in Magherafelt.

A local singer has been raising the spirits of care home residents as he brings his own special solo tour for them to watch through the window.

Wayne Rodgers, a member of Magherafelt-based wedding band The Allstars, has been entertaining residents since lockdown brough an abrupt end to his normal work.

“Everything has just fallen off a cliff, it’s all stopped overnight,” he told the County Derry Post.

“Mark Stewart, who runs a bar in Magherafelt, said some of the homes were asking if he could suggest anything entertainment-wise.

“The Manor Nursing home [in Magherafelt] was the first one I did. They had me back so I couldn’t have been too bad!”

A driving instructor by day, Wayne says he wanted to bring the residents of the care homes a bit of joy at a time when they are not allowed to have visitors.

He said: “I’m not an essential worker but I’m not doing anyone any harm. I’m there on my own and it’s entertainment for them and gives them something to look forward to.”

“They throw a sterilised plug out the window to me and I plug that into my own equipment. There’s no contact made.

“It breaks up my day. It’s as good for me as it is for them. You can hear them clapping and singing behind the windows.

“It’s sad - some of the relatives would come and sit in cars. They can’t go in to see their parents. They can only wave through the window and it’s very tough on everybody, strained times.

“Some of the homes are doing wee videos from inside and posting them online so the families can see them all enjoying themselves, singing and clapping along.”

Wayne is now a man in demand as word spreads of his singing exploits, and has performances lined up both in his adopted County Derry and native town of Ballynahinch.

He said: “We did one and then another got in touch. My brother in law arranged four in Ballynahinch on Monday, so I’ve done about ten now at this stage.

“I don’t like forcing people or anything, but this week I’ve been asked back to a few I’ve done before because the residents are enjoying it so much.

“I have another three lined up this week with a possibility of a few more coming on board.”

The old classics are proving popular as Wayne does the rounds, with one song in particular being requested on every occasion.

“They all seem to love Danny Boy,” he said.

“It seems to bring back memories. A lot of the patients in the homes have dementia and it seems to be a song that takes them home. They like the classics, the ballads – all songs from their era.”

Although the reaction has been overwhelmingly positive, there was one voice of dissent who would have preferred not to have Wayne singing outside his window.

“I got one negative comment. I was in Ballynahinch the other day and a man said ‘what’s your name son?’ So I answered and he said ‘well will you feck off, I can’t hear the TV!’

“He didn’t enjoy it as much as the others, but it gave everybody a laugh.”