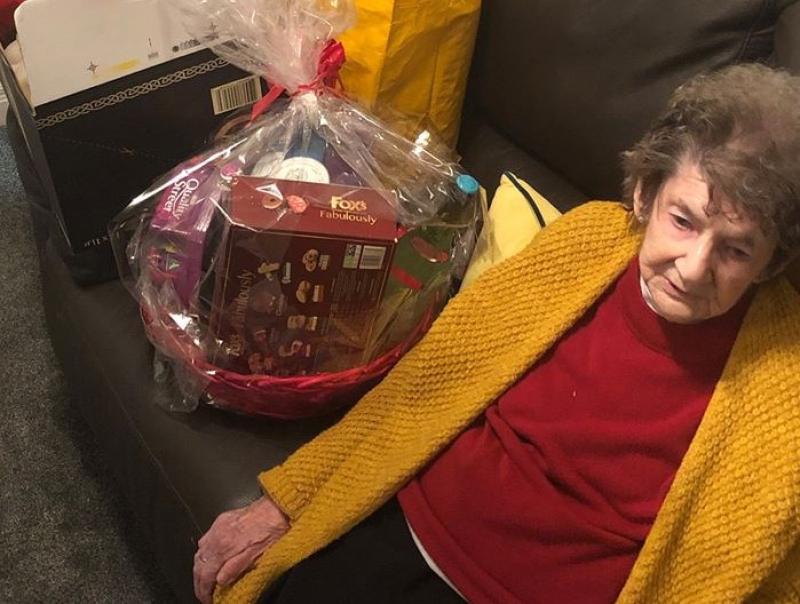 People in Derry and Donegal have come to the aid of a Creggan woman who fell victim to oil thieves and showered her with gifts ahead of Easter.

Over the weekend ‘unscrupulous individuals’ stole home heating oil from the back garden of 90-years-old Creggan woman Eileen Dalzell.

Her son Damien said the oil tank had been topped up in recent days because Eileen doesn’t like to run short.

But the heating wouldn’t turn on and when his brother checked the tank had been ‘completely drained’.

They realised that it had been stolen and when it was made public the response was immense.

“The comments, the donations, everybody was rallying around her, not only from the Creggan estate but across Derry and Donegal,” Damien explained.

“It was unbelievable, my mother was so overwhelmed, she was in tears and everything because of it.”

The community spirit in Derry has been evident since the coronavirus pandemic emerged and Damien believes this reaction exemplified that sense of togetherness.

“I think people also thought, who in this day and age would do this to a 90-year-old woman.  “Especially with this coronavirus going around people probably realised that the woman can’t get out of the house or anything.”

Eileen is a ‘strong wee woman’ and ‘didn’t let it get her down’, her son added.

All sorts of items were gifted to Eileen from toiletries, food and of course chocolates ahead of Easter.

He warned people to be vigilant and said that even in the midst of the coronavirus pandemic there are still 'unscrupulous individuals’ capable of taking advantage of it.

“Whilst others are out trying to save people’s lives and supporting local communities there are still unscrupulous individuals around who will exploit the situation for their own gains,” he added.

Meanwhile, Damien took the opportunity to say a ‘massive thank you’ for the support shown to his mother.

“People in this community are amazing and the scumbags are in the minority.

“So thank you to Gary Donnelly An Cro Mor, Tina Burke and Shauna Deery from Creggan Neighbourhood Partnershop

“Jean Rodgers and everyone who called to the house.

“And thanks to the neighbours around my mum for the concern they showed today.”